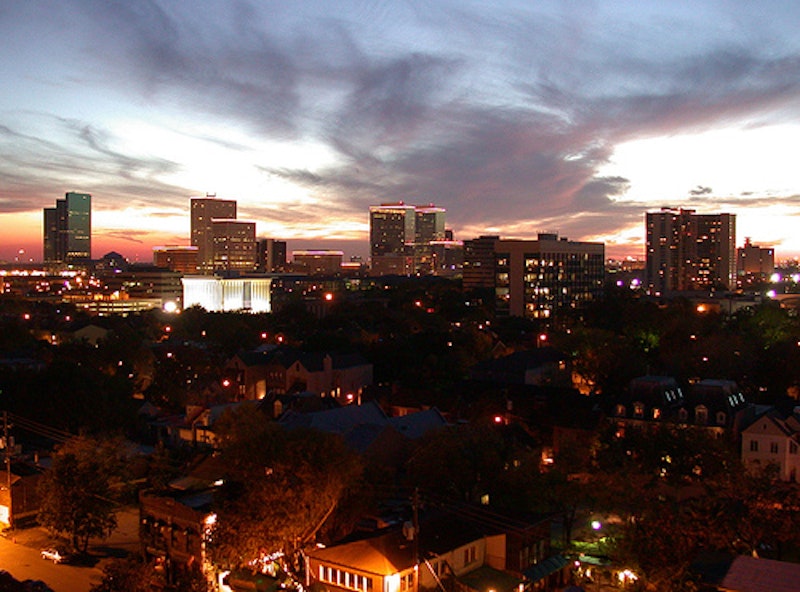 Photo of Houston by billjacobus1

My drive from Texas to Maryland was perfectly timed. School had just ended, my roommates left Baltimore for summer jobs and internships, my girlfriend graduated and moved on to teach high school in Arkansas and I was alone in my bare, boxed-up apartment. So when my friend Stu Sweeney called me up and asked if I wanted to help drive his mother’s car from Houston to Bethesda, Maryland, I instantly agreed.

The trip started with the hope of gaining some noble understanding of the South. I was an outsider, a Massachusetts boy at heart, but figured in a week’s time I could gain at least a slight perspective. I had just read V.S. Naipaul’s A Turn in the South which I thought would give me an idea of what I was getting into. Texas knocked all those pre-conceived notions to the dust.

Let me begin with a disclaimer. I will never fully understand the state of Texas. I could live there for 100 years and wouldn’t even come close, because if you weren’t born within its borders, you are always a visitor. And although being a tourist in Texas includes all the wondrous perks of Southern hospitality, I still felt like a foreigner throughout the entire trip. There was the sense that this was a culture I could never quite assimilate into, the same way I could never really understand when my great uncle would tell me stories of the Great Depression and World War II or when my mother described a Jimi Hendrix concert.

On the plane ride to Houston I asked Stu about the nickname “Dixie.”

“So Dixie refers to the whole South, right?” I asked.

“So we’re heading into Dixie.”

I didn’t get what he meant at first. Houston, aside from the streets lined with Texas flags, the chapel in the airport, and the horizontal stoplights, seemed no different than any other northern city. I didn’t figure out what Stu meant until the end of my trip, but it didn’t take long to understand what it meant to be a guest in the Lone Star State. On the first day I was treated to lunch at a relatively famous Mexican restaurant, brought to an Astros game, and told to run up as high a tab as I desired at a local Houston country club. Throughout the weeklong course of our little vacation I didn’t spend a dime, thanks to the Sweeneys.

The next afternoon we drove about an hour away from civilization into the green expanse of farmland known as Wharton. Stu’s father was an ex-Congressman and we were entering his former district, so for about three hours we drove from farm to farm as Mr. Sweeney narrated the long history of the region. He knew everybody, from the agricultural tycoons to the small-time local families that had been there for generations.

I could tell from a brief amount of time in Wharton that it hasn’t changed much over the generations. The same families maintain their franchises in the same houses. The local town stores and saloons look like they haven’t been renovated since the 1940s. The town of Wharton is even still unofficially segregated, the black population living in what was known as “the other side of Sunset Street.”

But despite the racial divide of the town, there didn’t seem to be much tension between blacks and whites in Wharton. At one point in the trip, we passed a black family having a barbecue on their front lawn and Mr. Sweeney stopped the car in the street just to give a young kid a high five and wish him a happy Memorial Day. This could have been an old politician’s man-of-the-people habit, but I don’t think that was the case. One thing that I came to understand during my three days in Texas is that friendliness is the norm. It’s a place where one can have a 10-minute conversation with a stranger on the street or where your car can break down and the first person who passes by will come to help you.

The first thing I noticed when I was introduced to Texans is the way in which the people are labeled. For the most part, a person’s central affiliation is either their family business (he’s from a Houston oil family) or the fraternity or sorority that they joined in college (she’s an old Theta from UT).

Then there’re the flags. I saw maybe two or three American flags but I couldn’t count the number of Texas state flags waving from the front door of just about every home we passed. I learned that this is the only place where the state flag hangs higher than the national and the Texas capitol building stands slightly taller than the Capitol Building in Washington D.C. This is a place where secession is still considered possible and even encouraged by the majority of the population. It’s a place where people won’t blink at the sight of a bumper sticker reading “I’m from Texas. What country are you from?”

So the one thing I came to understand was passed on before I even crossed over the state line: Texas is Texas. We drove out of Houston at six in the morning heading for Memphis in a van packed with boxes, blues CDs, and two howling cats. I had seen Texas and now it was time to see the South, and I couldn’t have possibly foreseen the surprises that were waiting for me on that long stretch of highway.