It's All An Act

Barney Hoskyns’ Tom Waits biography, Lowside of the Road, gets to the bottom of the man’s visionary, bizarre career. 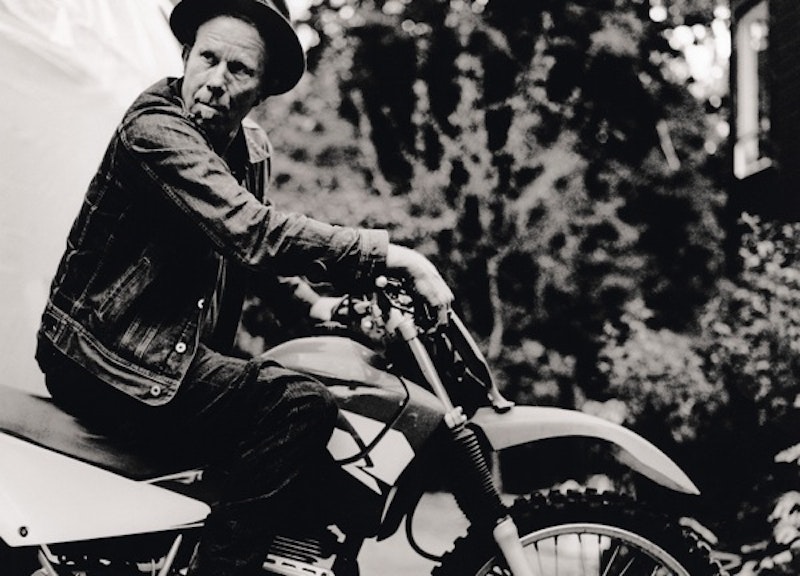 At one point in his Daily Show interview with Tom Waits back in 2006, a promotion for Waits' recent three-CD set Orphans: Brawlers, Bawlers, and Bastards, Jon Stewart turns and says, "I was struck, uh, when I met backstage your wife, your family, how unbeaten by life you are. You just seem vivacious and—you know, I used to listen to your music and think, boy, I'd love to lie in the street nearly dead with that guy." Waits smiles and throws up his hands, "Well, it's an act." It's this act that music critic Barney Hoskyns tries to deconstruct in his new Waits biography Lowside of the Road, prefacing with a Charles Bukowski quote that Waits once told him back in '85, "People think I'm down on Fifth and Main at the Blarney Stone, throwing back shooters and smoking a cigar, but really I'm on the top floor of the health club with a towel in my lap, watching Johnny Carson."

Hoskyns doesn't exactly get any help from Waits along the way—despite having interviewed him a dozen or more times since the mid-80s. Hoskyns quotes emails from friends, assistants and former managers, all refusing to answer questions at the request of Waits himself. "I thought things couldn't get any worse," Hoskyns writes, "when a veteran rock writer named 'Uncle Ray'—pseudonym for a Creem contributor who'd met Waits in the mid-seventies—chose not to 'interfere with Tom's privacy' by talking to me. (Jeez, I thought. If I can't even get ageing rock critics to talk to me, I really am screwed.)" Fortunately for Hoskyns, Waits hasn't turned down too many interviews over the years, so there's plenty for Hoskyns to dig up. As Hoskyns puts it, "For all the 'Gee, I dunno's and 'Aw shucks' that pepper his talk, he remains one of the most articulate interviewees in the business."

Hoskyns does a fine job of detailing Waits' early years as a ragged, chain-smoking wino piano man, chronicling the endless tours through dive bars and jazz halls, giving the obscure back story on songs from Nighthawks at the Diner and Small Change:

An encounter in New York's Penn Station on 8 April made a powerful impression on Waits. A street character named Rocky—en route to bumhood but not quite there yet—struck up a rapport with Waits and proceeded to bend his ear in one of the station's bars. For every two drinks they had, Rocky would order a third for his pal Charlie Dutton. After a series of increasingly tall tales—and with twelve whiskies lined up for Charlie on the bar—Waits learned the latter had been dead for thirty long years. "Charlie had been this guy's best friend, they were in Iwo Jima together," Waits recounted. "Thirty years and this guy was still mourning him, man." Waits began writing the lyrics for a song called "One for Charlie Dutton," referring to it on occasion as a working title for his next album. In due course the song became Small Change's "Jitterbug Boy."

But the best parts of the book are about Waits' bizarre early 80s work, his reinvention after meeting his wife Kathleen Brennan while working on the One From the Heart soundtrack. Waits has given a lot of credit to Kathleen for this reinvention. As Hoskyns quotes him, "She was the one that started playing bizarre music. She said, 'You can take this and this and put all this together. There's a place where all these things overlap. Field Recordings and Caruso and tribal music and Lithuanian language recordings and Leadbelly. You can put that in a pot. '" Whether Brennan deserves that much credit or not, Hoskyns doesn't really care to discuss. "Whether or not it was Kathleen who turned her husband on to, say, Captain Beefheart, matters less than the fact that she was the catalyst for change." Hoskyns lovingly describes the early days of their relationship, and their musical partnership on albums like Swordfishtrombones and Franks Wild Years: "You can't really overestimate how much she brought positively to the table in a creative sense," as one of Brennan's colleagues Michael Hacker puts it.

If you're looking for critical judgment on why Rain Dogs tops Blue Valentine hands down, you won't find it here. Hoskyns has only one goal in mind: "to chart the growth of a remarkable artist—to look at where he came from, what he did with his experience, and how he changed direction when he needed to—in the belief that people want to know more about it." The author has succeeded magnificently.