Brothers, a new nonfiction collection edited by Andrew Blauner, can be a harrowing read, but its best moments are touching and beautiful. 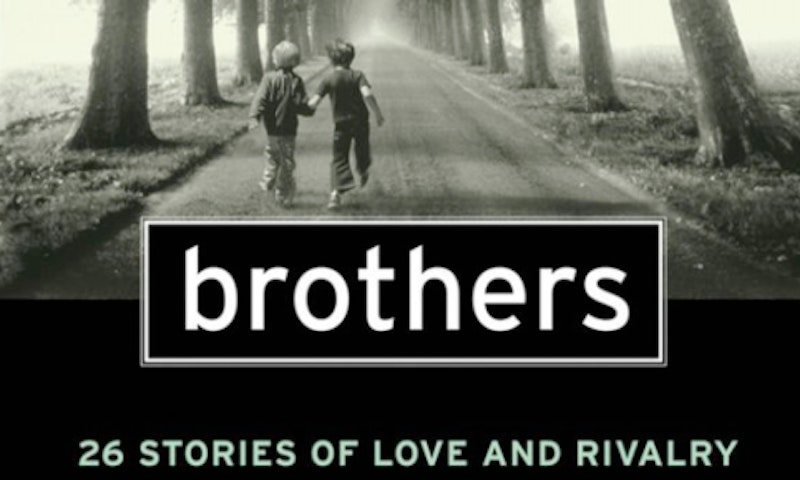 While reading the fourth page of Gregory Orr’s “The Accident,” his contribution to Brothers, an absorbing collection of 26 essays by notable writers about their relationships with male siblings, I paused and put the book down for a minute, stunned by the horror that, out of nowhere, was revealed. Orr recounts a hunting trip with his father and three brothers—first day of deer season!—and after an antlered buck was felled, which the author, who was 12 at the time, thought was his trophy, the rifle that was casually held in his arms discharged, and the family’s life was changed forever. Orr, a distinguished poet and professor at the University of Virginia, and now in his early 60s, writes:
Peter [his eight-year-old brother] was there, a little behind me, not more than two feet from where I stood. In that instant in which the sound of my gun firing made me startle and look around, Peter was already lying motionless on the ground at my feet. I never saw his face—only his small figure lying there, the hood up over his head, a dark stain of blood already seeping across the fabric toward the fringe of fur riffling in the breeze. I never saw his face again.
It was painful to continue reading after this passage, but of course, like a rubber-necker, I did, as the young Orr is comforted later by his raw-eyed mother, questioned by the local police and told by a well-meaning (but utterly unbelievable to the boy) family friend that Peter was now in heaven with Jesus. Incredibly, and how Orr can even write about this day is beyond me, it turns out that his father, as a child about the same age, accidentally shot and killed one of his friends. Orr concludes with an obligatory few paragraphs about Cain and Abel—we get it, thanks—and with hindsight, figures that his own parents might have blamed themselves for the tragedy, although this wasn’t meant as absolution. At least I don’t think so; Orr doesn’t fill the reader in on how his life proceeded from that winter day five decades ago.

Not all of Brothers is so gloomy, or dramatic, although there’s a lot more despair, depression and dysfunctional families that one would expect from a book that’s subtitled, “26 stories of Love and Rivalry.” Many of the writers are quite familiar, as are their relationships, such as Ben and Fred Cheever, both accomplished men who, in a joint essay, are consumed with shadow cast by their famous father John. I glossed over this one, since my appetite for anything relating to John Cheever—not a favorite author to begin with—was satiated long ago. And although David Kaczynksi sheds new light on his Unabomber brother Ted, and the love/shame that imbues their relationship, that whole weird chapter in American culture seems, in light of the tumultuous first decade of the 21st century, very musty and distant, almost in the same league as Leopold and Loeb or Richard Speck.

Mikal Gilmore, brother of the infamous Gary “Let’s Do It” Gilmore, shows up, but his story about another Gilmore, Frank, is quite affecting. Both Mikal and Frank went separate ways in the wake of their killer brother’s notoriety, and Mikal admits, warily, but without guilt, “Life had been good to me in many ways—better to anyone else in my family.” And so when Mikal, a successful journalist with a comfortable lifestyle, searches for Frank, whom he hadn’t seen in years, he’s unsure of what sort of reaction he’d receive, for his brother was the one who looked after their mother and then led the life of a drifter, finding odd jobs, drinking himself into a stupor and living on the street. When Mikal does locate Frank, the latter doesn’t recognize his brother, and the writer says it would’ve been “okay,” had Frank pushed down the flight of stairs. Instead, Frank embraced him, and they re-connected, leaving Mikal to conclude: “Maybe, just maybe, I was ready to learn something worthwhile about fidelity born of blood.”

That story, “Secrets and Bones,” does, in its own way, have its (very) rough-hewn charm, yet made me, the youngest of five brothers, feel as though our family, despite its idiosyncrasies, was closer to the stereotype of tame sitcoms like The Donna Reed Show or My Three Sons rather than one of R.L. Stine’s Goosebumps books that I used to read my own kids when they were still wearing Christopher Robin-style red-buckle shoes. Around my childhood suburb, which was one of those Levittown-style developments that mushroomed in the early 1950s, the Smith boys were known as “The Brothers,” a nickname that continues to this day in our large, extended family. I remember, as a youth, my mother drilling the mantra that we five should be closer to each other than our parents, since you never knew when they might, as she said, “bite the dust.” This could’ve been a glossy old chestnut—Mom was an endearing eccentric who was never at loss for a rich yarn—but as it happened, they both did pass away prematurely and her wish was fulfilled since we’re extremely close.

One summer day, when I was 12 and the star player for my little league baseball team—a solitary year of athletic glory—my four brothers came to see our championship game in a fancy ballpark just outside of Huntington, New York. They sat in the stands, rooting the “caboose” of the family, and I stunk the joint up, striking out four times and habitually missing the strike zone while pitching. Our team lost, the mean-spirited coach was unstinting in his criticism of my play, and I walked off the field in tears. My brothers, all four of them, were cool cats and attempted to make things right, which of course was impossible in the immediate aftermath of the game. Still, half an hour later, all of us driving to the Walt Whitman mall, listening to WMCA’s Top 40, windows down, I gradually felt relaxed, comforted by their presence, and in their own unobtrusive way the older boys made me feel human again. It’s a wonderful memory, really, and wasn’t atypical.

My favorite story in Brothers was written by David Maraniss, a Pulitzer Prize-winning editor for The Washington Post and the author of two spectacular sports books, Clemente and When Pride Still Mattered. “The Sensations of Jim,” is a joy to read, for the admiration and love that David and Jim Maraniss have for each other is unabashedly celebrated; the author is unapologetic in his praise for Jim, and is proud to show him off to the readers of Brothers. Maraniss, in just one touching anecdote, describes meeting Jim, a professor at Amherst, for a football game against that college’s archrival, Williams. Jim is surrounded by current and former students, gregariously gabbing and laughing, and eagerly anticipates the game.
This was not Bill Clinton working a campaign rope line as a means of self-gratification. My brother is the furthest thing from a glad-hander or striver. But the game, the setting, the students, our arrival—all combined to make him contagiously happy. [David Marannis’ friend Jimmy Warren] and I brightened at the sight of him, rocking slightly on his spindly legs, his pants riding high above his waist, his pale, bespectacled face protected by a wide-brimmed hat. The secret about Jim is that he is too cool to care about appearances.
Other exceptional essays in Brothers are David Sedaris’ hilarious description of his redneck brother in “You Can’t Kill the Rooster”; Floyd Skloot’s “Jambon Dreams,” a romp through a lifetime of his family’s gustatory delights; and Herbert Gold’s affectionate mini-biography of his late brother Sid, in “King of the Cleveland Beatniks.” Also worth mentioning are the back-to-back contributions of Geoffrey and Tobias Wolff, who describe the summer of 1961 when they converged upon La Jolla, CA, where their irresponsible, drunken father unwittingly conspired to make both of them miserable. That the Wolff brothers have completely different memories of that almost impossible—and to the reader, at least, comical—series of events is precisely the sort of material that led me to finish Brothers during one sitting.
Brothers, edited by Andrew Blauner. Wiley, John & Sons, 273pp., $24.95 (hardcover).