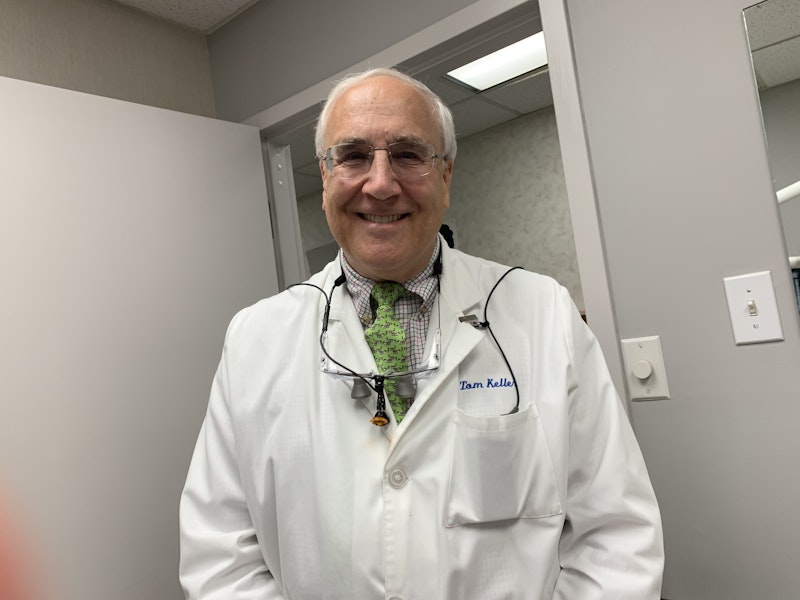 Around six last Monday morning, after an iced coffee and a scan of The Wall Street Journal’s headlines, I settled in at my desk, popped a Raymond Scott disc into the CD/radio appliance and mentally steeled myself for a 9:50 dental appointment. Nothing major—just a routine cleaning—but like a lot of people I loathe these periodic visits. General physicals, optometrists, dermatologists and the like aren’t as daunting—aside from the inconvenience of arriving on time and killing a chunk of time—and that goes back to the 1960s when my cavity-ridden baby teeth were assaulted on a regular basis.

Miraculously, once the adult choppers arrived, the health of my teeth reversed, and for a stretch from 1972 to 1991 I didn’t have a single cavity. And though this most recent spruce-up was benign, it’s uncomfortable lying back in the chair, shaking my right arm so it doesn’t fall asleep and counting the minutes until liberation. It’s not fear, just a colossal annoyance, a doctor tic that’s not unusual.

However, this occasion was noteworthy because my dentist for the past 16 years, Tom Keller, whose office is in Towson, MD, is retiring in September after 45 years in the trade. It’s a drag for me (and hundreds of his loyal clients) since despite the unpleasantness, Tom’s easily the most-skilled dentist I’ve patronized, and a pleasure to chat with for five minutes or so once the business at hand is completed. We compare notes on politics (he runs libertarian, so there’s none of the animosity that you must avoid with certain friends), our families and the latest movies.

In all these years, we had just one bone of contention: my bottom teeth are crowded, and in 2005 he made a strong suggestion for braces. I’d just turned 50 and looked at him like he was Len the Plumber, Koons Automotive, or one of those ambulance chasers that advertise on local TV. He made his case—easier to clean, a better smile (my bottom teeth don’t show when I smile) and some other mumbo-jumbo. I countered, as amiably as I could muster, that at my age, braces were a vanity project, not to mention a waste of money (not for him!) and it was a dead issue.

He half-heartedly repeated the benefits, but understood there was no sale, and it’s been a smooth dental ride since then. Two years ago, I finally relented on his advice that I have my wisdom teeth removed even though they’d never given me a minute of pain, and I’m glad I did, even though the fellow performing the minor surgery was an asshole, one of those bums who forget your name and talk on a cell phone before the procedury about some fancy new car he’d just purchased. In addition—and admittedly, his work was flawless and quick—he sloughed off the pain, said I should just go with Tylenol and only after some prodding did I get a four-day script for painkillers. I understand that doctors today have clamped down on handing out pills like jelly beans, due to the widespread opioid abuse, but, unlike my much younger days, I don’t abuse drugs, so that pissed me off too.

As I’ve written before—traumatic events are not evergreens, or self-plagiarism since more nuance comes as the years pass—one of my first memories was when I was four or five and taken for an overnight operation to completely re-tool my mouth, which had amassed an astounding 28 cavities. I was wearing light green pajamas with cowboys and Indians decorating them, and it was my first brush with anesthesia. I woke up when the savagery was completed, and was horrified to feel that my mouth was now a cheap silver repository, with ugly black fillings all over.

It wasn’t the then-primitive orthodontic headgear that some unfortunate kids had to wear to school, and took shit for (far more than tubby classmates), but it was pretty disgusting since bits of food would get caught in the caps and I’d have to use my tongue to corral and spit them out. A few years later, my brother Gary and I had twin prophylactic (at least in my case, I can’t recall if Gary’s had flared up) tonsillectomies, and aside from a scratchy throat that was a relative breeze. All the ice cream I wanted—an exception to the no-sugar rule after my aforementioned oral surgery—and side by side with my brother, throwing pillows at each other, watching re-runs of The Twilight Zone and The Donna Reed Show on the fuzzy TV was pretty great.

Back to dentists. Our family of seven employed the services of Dr. Elliot Ellis, whose office was on a sidestreet in downtown Huntington on Long Island. Looking back, I’d guess he was more than competent, and genial, but that’s about it. What the hell: when you live in a (then) small suburban town you don’t have many choices, and Dr. Ellis was a family friend. No wonder: my mom was at his office with five sons all needing attention, some (like me) more than others. (I wonder how health insurance worked then; my dad was self-employed, so perhaps he had a decent package.) It wasn’t the dawn of dentistry, at least in America, but when that 100-pound brown radiation protection “pad” was laid over my chest when x-rays were painfully taken I felt like John Quincy Adams was probably one of Dr. Ellis’ regulars as well. I can still summon the fiery smell when cavities were filled from instruments whose pitch would surely kill any normal dog.

I didn’t have occasion to visit a dentist again until 1987 when, upon waking one morning in Manila, a molar was barking like a motherfucker. It figured, I thought, all these years of avoiding it and a problem comes up abroad. I asked the hotel’s concierge to recommend a dentist (probably on the take), which he did, and walked the several blocks to a sketchy looking building. I walked up to the third floor, took one peek at the medieval equipment, and wouldn’t you know it, my mouth felt fine.

Later that year, when I moved to New York, I went to an Upper East Side dentist for a check-up, and while nothing was amiss, his halitosis was so acute that I would’ve far preferred he brushed his teeth with bourbon that morning. Later on, I settled on a guy in Tribeca, whose office was on the New Age-side, with customers encouraged to pick out a contemporary CD to listen to on earphones while the fellow went about his business. A nice touch, I guess, but the cleaning lasted more than 90 minutes, so I was an infrequent visitor.

And that brings me around again to Tom Keller, a royal in the profession. I asked how he’d spend his time, whether he’d be in front of the tube during the afternoon, but it turns out he’s a hobbyist carpenter, actually making furniture in his spare time, so he’s covered. I’m not embarrassed to admit I watch Mark Harmon play Jethro Gibbs on the old-folks TV show NCIS, and like the scenes of the haunted Gibbs working out frustration in his basement, sanding and fiddling with half a boat, jelly jar of whiskey at the ready. Tom Keller could do worse than that in retirement.