I hadn’t been in these parts for a decade or more, and I’d never been on some of these streets at all, so this trip was a treat. 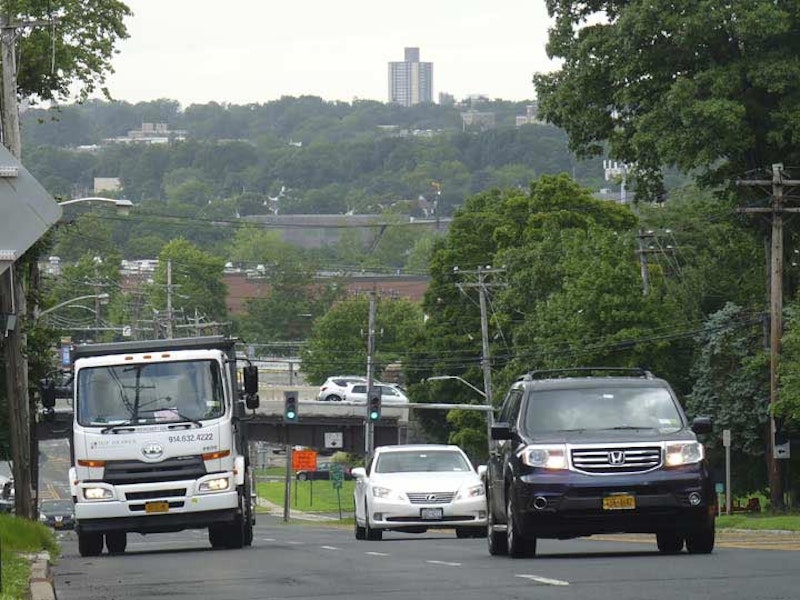 I went tearing about the extreme northeast Bronx because I saw an item on Street View I wanted to photograph. Did I find it? I’ll get to that. It was a very humid day, with sun one minute, and rain the next. I’m fascinated with areas on the NYC borderline, and like most of them, you’re more or less immediately aware when you’ve left the city and entered the suburbs. I hadn’t been in these parts for a decade or more, and I’d never been on some of these streets at all, so this trip was a treat. 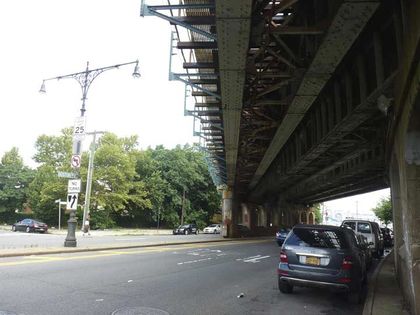 I began my trip by changing from the #2 train to the #5 at E. 180th St., and got off at Baychester Ave., one of the stops on the Dyre Ave. Line, which was originally built in the 1910s as the New York, Westchester and Boston Railroad. The line never reached Boston, but did get as far as the center of Westchester County. The railroad went bankrupt in 1937, but NYC purchased its assets and repurposed it for the NYC subway system beginning in 1940.

I turned north on Boston Rd. According to Bronx historian John McNamara, Boston Rd. was constructed by surveyor John B. Coles in 1794. It’s a reroute of the original Boston Post Rd., which was started in 1672 as a mail route between Boston and NYC (a 270-mile distance), following a network of Indian trails. The original branched off north of the present Boston Rd. in the Bronx; its present route is marked by Kingsbridge Rd. in Mount Vernon and by Bussing Ave., Barnes Ave. and Gun Hill Rd. in the northern Bronx. Lewis Morris, an early Bronx honcho, wanted the Post Rd. to run through his property; enter John Coles. In fact, early on, that road was known as Coles’ Boston Rd. North of what would become the Bronx-Westchester line, the two roads converged and continued north. Further north, the Post Road would separate into more tributaries, each reaching Boston via a separate route. In those days, what takes a few hours by car now took a few days by horse or coach. 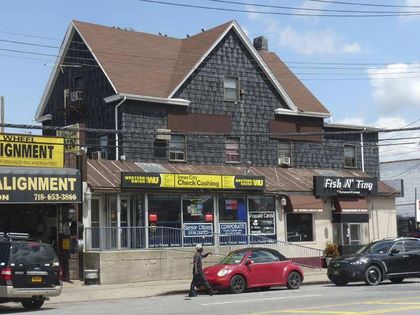 Decades ago (in the 1950s) the four-gabled house at Boston Rd. and DeLavall Ave. was Duffy’s Roadside Tavern, owned by an Irishman named Duffy who capitalized on the popular radio program “Duffy’s Tavern.” It was a local watering hole where my friend Don Gilligan says, “we misspent many an underage night swilling beer and playing shuffleboard to determine who would pay for the beer. The building was probably never a farmhouse. More likely a 1920s roadhouse.” 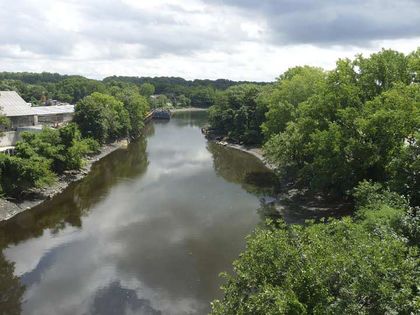 I crossed the Eastchester Bridge, which takes Boston Rd. over the Hutchinson River, twice on this walk. I consulted my copy of Sharon Reier’s Bridges of New York, published by Dover Books in 1977, which states the bridge is a bascule and opened in 1922; the design seems a bit newer than that to me, so perhaps the bridge was replaced since 1977. I also didn’t detect a split where a bascule, or drawbridge, would open to admit shipping, so I believe the Eastchester may be a fixed bridge constructed after 1977.

William and Anne Hutchinson had espoused religious freedom after arriving in Massachusetts from Anne’s birthplace in Alford, England, but the Puritans had none of it and expelled them. After a brief stay in Rhode Island (Roger Williams’ colony was an early outpost of tolerance) William died and Anne and her family moved to this far-off outpost in what was then rural Westchester. But most of the family, including Anne, was killed in a Siwanoy Indian raid in 1643. According to legend, Anne was killed while attempting to hide the crevice of a nearby rock known as Split Rock by an Indian sachem named Wampage. 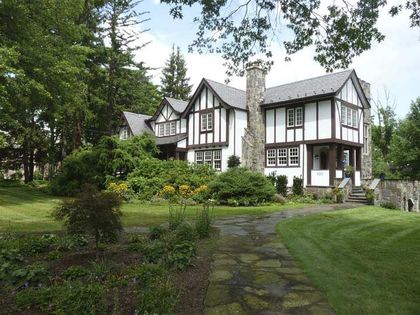 Englishman Thomas Pell, a physicist, purchased a vast tract of over 9000 acres of land (most of what is now eastern Bronx) from the local Siwanoy Indians in 1654, and established the Manor of Pelham in 1666. Among the Siwanoy sachems who sold the territory is believed to be Wampage, who had killed Anne Hutchinson. About 10 years later, Thomas’ nephew John Pell built the first of the three Pelham Manors that have occupied its site on 895 Shore Rd. in the middle of Pelham Bay Park. Descendants of the Pells occupied the manor houses for nearly 150 years, though a great deal of the property was sold off just before and after the American Revolution. By 1813 the remaining 233 acres was sold out of the Pell-Bartow family (Ann Pell had married John Bartow), but in 1836 John’s grandson Robert reacquired the property and built the mansion in 1842 that is there today. It’s open as a museum, complete with a graveyard that has some ancient markers in it.

Pelham Manor is about as suburban as it gets just outside NYC. The average income is over $250K a year, and the private homes are well-cared for, as are their lawns. 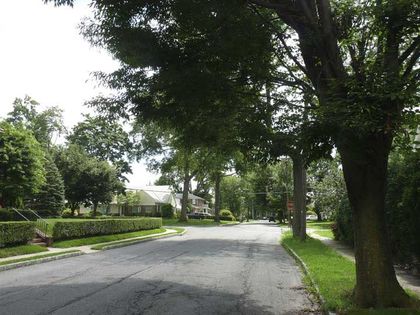 Peace St. is typical of quiet Pelham Manor. It’s also the only really unusually named street in the area; what treaty does it commemorate? The street ends at Park Dr., which features NYC-style street signs and street lighting. Originally, the northern edge of Pelham Bay Park was the Westchester/NYC border, but in 1892, legislation was passed that shifted the city line a few yards to the north. That means that when Park Dr. was constructed here, it fell within the Bronx and any residence along it pays New York City tax, as well as conforms to other legal details.

Why was the line shifted? There are a number of theories. One was that the City wanted to make sure that some islands in Eastchester Bay such as Hog Island were within the city limits. It makes for a very unusual occurrence since some streets are within NYC but unattainable except by first leaving the city! They’re taxed as NYC residences. Con Edison provides power for both NYC and Westchester County (were this Long Island, LIPA provides power for Nassau and Suffolk). 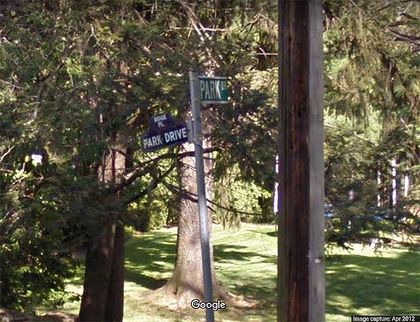 Now for that wild goose. Notice on this Street View shot from 2012, there’s an old-style humpback Manhattan/Bronx street sign affixed to a relatively new pole at Park Dr. and Ridge Pl. There’s just a stub of Ridge Pl. actually in the Bronx, as most of it’s in Pelham Manor. How this old veteran sign got to this spot is hard to say. Either it had been there all the time, or a local collector thought it would be good to put it out in the open where the Department of Transportation could find it and replace it. Predictably, the sign has disappeared, and my wild goose chase had been for naught. I imagine a fellow collector snatched it up. I’d have left it in place—I like landmarks in situ. Old NYC signs fetch a pretty penny on eBay, $300-$500. I bought one at a flea market in 1988 for $50, but I’ll never give it up.

It was time to go home. The Dyre Ave. subway terminal wasn’t supposed to be part of the subway at all, but was “captured” by the Transit Authority in 1940. And, until fairly recent times, Dyre Ave. was a breed unto itself. Like Staten Island Railway there were no turnstiles in the stations—you handed the fare to a conductor when (s)he came around, and you received a transfer ticket which you would use upon boarding a connecting train at 180th St. The rise of the Metrocard doomed that arrangement. Now Metrocards themselves are being phased out.