Taking in the Strays

What to name this latest one. 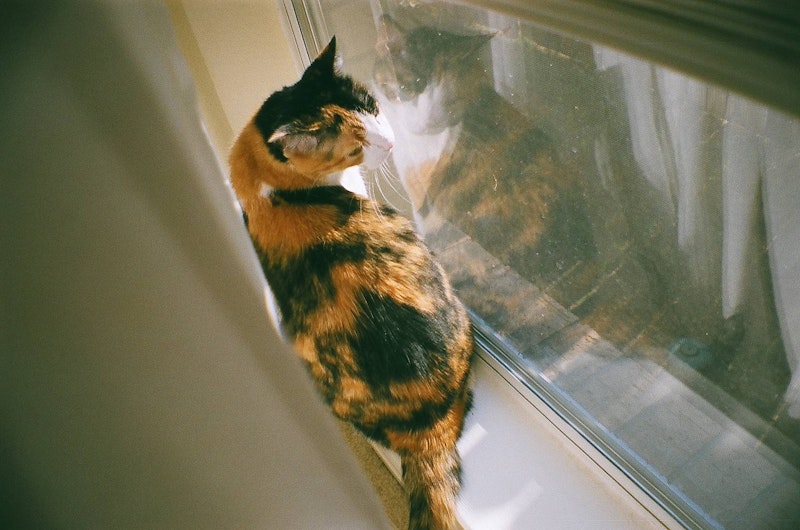 Since Mimi and I moved to New Hampshire in March 2016, several stray cats have wandered into our barn. Perhaps we live along a ley line. The first, a marmalade tabby, arrived during that first summer. His presence scared our cats, leading a couple of them to what some politely call inappropriate micturation inside the house and outside the litter boxes. So I hauled the humane trap from storage, fixed a bait of mackerel, poured a libation of mackerel juice and clam juice from the trap’s opening out onto the barn floor and the driveway. Cats apparently find this combination irresistible.

Naturally, one of my cats scooted out the door when I retrieved the mail and became the first to rush into the trap. There I found our Henry Plantagenet, also a marmalade tabby, mewing piteously. I brought the trap into the house and released him. He immediately ran upstairs and hid in one of our closets for two days, emerging only to appropriately micturate.

After reloading and setting the trap, I checked some hours later. There was our visitor, also mewing piteously. I spread newspapers in one of the barn’s finished rooms, put trap and cat on them, refreshed the food and water, and closed the door. Next morning, I took him to Monadnock Kitty Rescue, a no-kill shelter in Jaffrey, about 20 miles south of us. I arranged for his shots and neutering. He was, as the Spanish might say, an entire cat. Then the trap was opened, and the big, handsome fellow leapt into the arms of a kindly volunteer, snuggled up to her, and purred like an outboard. He was clearly a stray, not a feral, though without a microchip or collar so he might be returned home.

I was leaving when Heidi Bourgeois, the shelter’s director, asked, “What’s his name?”

“You should name him.”

A name came to mind and I smiled. “What are you thinking?” she asked. “Odysseus,” I replied. “The sly and wily wanderer.” He was adopted within 10 days. The adopter telephoned to thank me for catching Odysseus. She’d lost her cat some months before, noticed Odysseus’ photograph on the Kitty Rescue webpage, visited him, and fell in love. For her, he was perfect: sweet, affectionate, and grateful to have found a home.

During the summer of 2017, another marmalade tabby wandered into the barn. This fellow was interested in moving in with us. We found him every day perched on the plant stand on the deck, just outside my wife’s writing room. He gazed soulfully at our long-haired marmalade enchantress, Cordelia, who, reclining on our side of the window like Madame Recamier, gazed back with an appraising expression.

Now we knew the drill; trapped the cat; and took him to Kitty Rescue. As marmalade is a fancy word for orange, and I’d given our first visitor a name beginning with O, we felt we should do the same for this fellow. Mimi’s interested in children’s literature. During the last century, Kathleen Hale, a British writer, published tales with a hero: Orlando, the Marmalade Cat. The choice was obvious. We took him to Kitty Rescue and paid the expenses. Yes, to paraphrase Tom Wolfe, Orlando was also a cat in full.

In mid-January 2018, a black-and-white visitor appeared in the barn. He’s furry. He keeps his distance. We haven’t yet trapped him because New Hampshire’s weather was below freezing for nearly three weeks. I took in the trap at twilight because I didn’t want to trap and witlessly freeze him to death overnight. I put out food for him because he needed the calories to stay alive. I know he’s here: someone other than my cats has been eating the food.

What to call him? As the cat was largely black, Mimi suggested a name beginning with B: Bennington, the name of a neighboring town. After all, he might have come from there. Bennington is one of the many New Hampshire towns named by New Hampshire’s penultimate Royal Governor, Benning Wentworth. In addition to his duties as Governor and Vice-Admiral of New Hampshire, Benning was a wheeler-dealer in land. He erected numerous townships, reserving prime lots for himself, and named them for friends: Rutland for the Duke of Rutland and Henniker for Sir John Henniker, later Lord Henniker. Bennington he named for himself.

In 1766, Benning was succeeded by his nephew, John Wentworth, a much handsomer and more polished man. A Harvard man, born in Portsmouth, NH, John became an extremely popular governor. He fell in love with a married woman, Frances Deering Atkinson. His feelings were returned. Mr. Atkinson died of natural causes in 1769. Within a week of Mr. Atkinson’s funeral, Frances and John were married. One doubts the funeral baked meats did coldly furnish forth the marriage tables, but then one never knows.

In the family tradition, he named two towns after her: Deering and Francestown. John openly disagreed with the Imperial government’s colonial policy and sought to mitigate its burdens on the province of New Hampshire. But he remained loyal to the King. On June 13, 1775, Governor and Mrs. Wentworth found the local chapter of the Sons of Liberty mobbing their house, weapons in hand. Some sources say the Sons had rolled a cannon to the front door.

Being reasonable, John and Frances fled for their lives. The Revolutionaries confiscated John’s property without compensation and forbade his return to New Hampshire on penalty of death. John received a new job, Lieutenant Governor of Nova Scotia, and eventually became Sir John. The marriage survived Frances’ fling with Prince William Henry, later King William IV, who was briefly assigned to duty at Halifax, Nova Scotia. Sir John loved Frances and did not rebuke her. Instead, he quietly made his displeasure known to the young man’s father, King George III, and the Prince was summoned home.

Sir John died in 1820. He’d always loved New Hampshire, the land of his birth. Fifteen years after his countrymen seized his property and proscribed him, he expressed his hope for the success of the United States under its new Constitution. He wrote: "If there is anything partial in my heart in this case, it is that New Hampshire, my native country, may arise to be among the most brilliant members of the Confederation; as it was my zealous wish, ambition, and unremitted endeavor to have led her to, among the provinces, while under my administration. For this object nothing appeared to me too much. My whole heart and fortune were devoted to it."