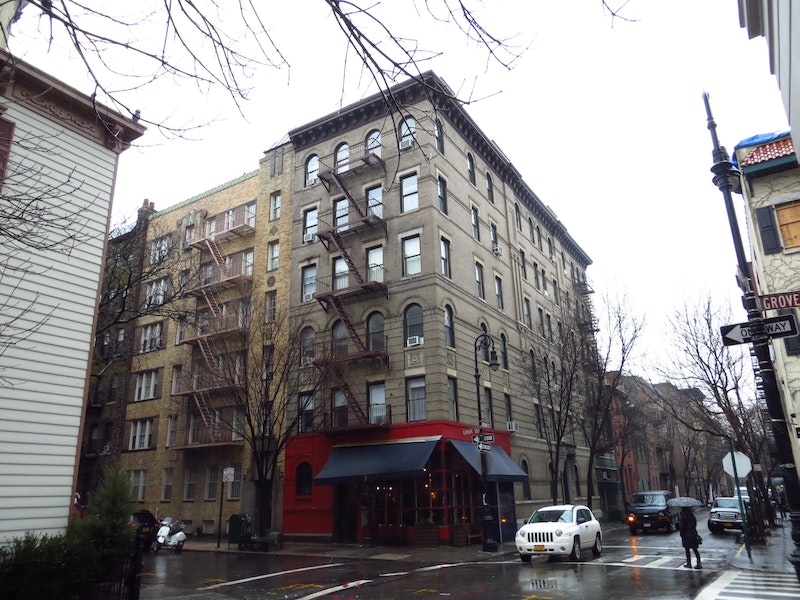 “Bedford” is perhaps a better-known appellation in Brooklyn, where Bedford Avenue is the borough’s longest, running from Greenpoint to Sheepshead Bay, or the Bronx, where Bedford Park borders Fodham University and the NY Botanical Gardens. Bedford Street is one of Greenwich Vilage’s more unsung thoroughfares, running northwest from 6th Avenue and Houston Street to Christopher. The origins of the name are somewhat hazy: both Henry Moscow (The Street Book) and Sanna Feirstein (Naming New York) say it was named for Bedford Street in London (in Westminster), though neither knows why. 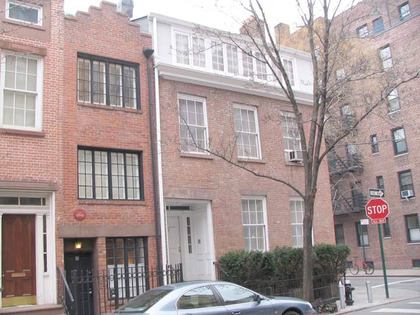 Two of the Village’s more fabled buildings are side by side across the street. In a house so narrow it rates only half an address is 75-1/2 Bedford Street, a house only 9-1/2 feet wide. There used to be stables inside the block adjacent to the Isaacs-Hendricks House, and the narrow building was constructed in 1873 on what used to be the carriageway entrance. Famed poet Edna St. Vincent Millay lived in the building briefly in 1923-24. (Beat-era chronicler and novelist William Burroughs lived at 69 Bedford, a few doors down, in the 1950s.)

Next door, on the corner of Commerce, is 77 Bedford, the oldest building in Greenwich Village. Known as the Isaacs-Hendricks House, it was built in 1799 (before most of the Village streets had been laid out), although large sections of it, including the brick facing, were added in 1836, and the third floor is practically “new,” since it was added in 1928. The structure is a former farmhouse owned by Harmon Hendricks, a copper merchant who supplied Robert Fulton with materials for copper boilers that powered the historic Clermont steamboat first run in 1807. 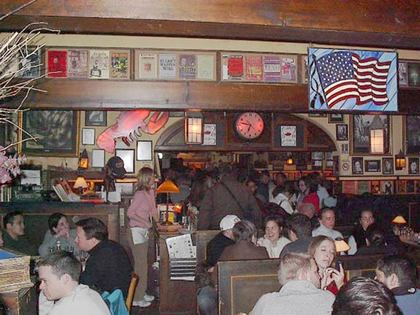 Chumley’s, at 86 Bedford near Barrow, is attempting to write a comeback story, albeit very slowly. One of its interior walls collapsed in early 2007, forcing a reconstruction.

Like its contemporary, "21," Chumley's was once a speakeasy that has survived to the present day. 86 Bedford Street near Barrow has been there since 1820 and began life as a blacksmith's shop. The property was purchased by Leland Chumley in 1926; Chumley, an International Workers of the World member, held meetings upstairs while running the speakeasy on the ground floor. It gradually developed a reputation as a gathering place for the West Village's literary demimonde, with F. Scott and Zelda Fitzgerald, especially, as regular patrons.

After Leland Chumley's death from a heart attack in 1935, his wife Henrietta assumed the newly "legitimate" bar's operations, and continued in that role until 1960: she was a nightly fixture at her favorite table, which had earlier been the Fitzgeralds'. It was Henrietta Chumley who began the bar's unique practice of displaying the dust jackets of books published by authors who drank there. The list is illustrious: it includes Ernest Hemingway, Eugene O'Neill, Norman Mailer, John Steinbeck, Allen Ginsburg, and virtually every major literary figure of the 20th Century.

Chumley's has also been a gathering place for firefighters, especially the local firehouse, Engine Company 24, ladder Company 5, who lost eleven men on 9/11. A plaque in the back room is dedicated to the firehouse.

Hundreds of portraits of authors and book jackets (including one for my own book, 2006's Forgotten New York), as well as historical photos, have been hung on Chumley's walls.

According to legend, the term "86" comes from 86 Bedford. During Prohibition, cops would magnanimously telephone Lee Chumley to announce a raid; Chumley would holler out "86!" to patrons, indicating they should leave by the front door.

After a wall collapse in 2007, Chumley’s management has been trying to write a comeback story, but reconstruction has been going slowly, and there’s a new roadblock: some area residents have gotten quite used to a Chumley’s-free Bedford Street, and have voiced opposition to its return. 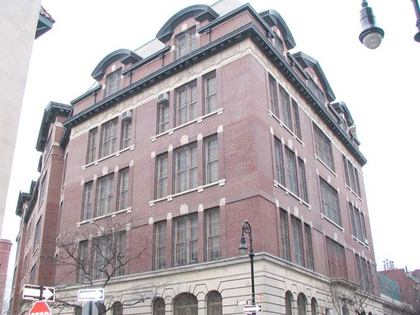 PS 3, occupying part of the block between Hudson, Bedford, Grove and Christopher Streets is so large it had to be built to accommodate the curve in Grove Street. A school has been here since 1818—the Marquis de Lafayette visited PS 3 during his triumphal tour of the United States in 1824, as the plaque facing Hudson Street attests.

A 1917 “time capsule” created by school alumni was recently opened:

The copper box had a couple of medals that were given to alumni and to graduating students, as well as programs from a few annual (former principal) B.D.L. Southerland Association dinners. School songs and engravings of the long-bearded Southerland were among the contents, along with a roster of distinguished old graduates. 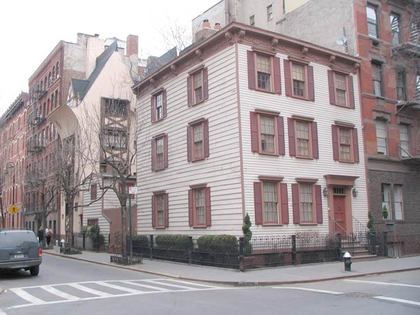 Some folks think this frame house on the corner of Grove and Bedford Streets is the oldest in the Village (as opposed to the Isaacs Hendricks House). It’s pretty old alright, but there are a fair number that are older. Frame houses are relatively rare in lower Manhattan.

Window sash maker Thomas Hyde built it in 1822 and, typically of houses built at the time, it had only two stories when built, with the third going up in the 1870s. 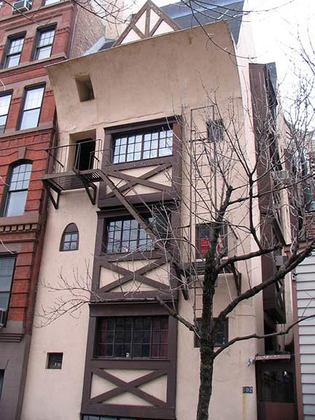 Next door at 102 Bedford Street, an 1830 townhouse was renovated beyond remembering in 1925 by Clifford Daily with help from financier Otto Kahn. Daily, an amateur architect, considered the surrounding buildings mundane and wanted to liven things up. But Kahn took over the building and offered Daily $5,000 to clear out. Daily reluctantly agreed, but vowed to someday return. The story goes that he plunged two bottles of champagne in wet cement in the basement and said he would break them out when he returned to Twin Peaks. The bottles are still waiting. 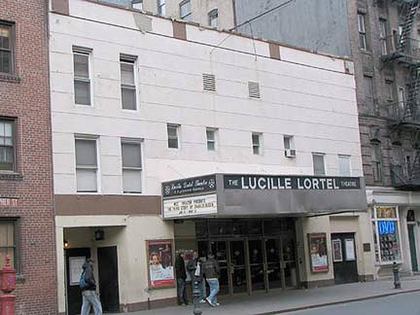 Bedford Street ends its northern progress at Christopher Street. Lucille Lortel, known as the Queen of Off Broadway, could also be called the Queen of the 20th Century; she was born in 1900, and died in 1999. The old Theatre de Lys, in a building constructed in the 1860s, was acquired by Miss Lortel in 1955—independently wealthy, she brought works by American playwrights such as McNally and Albee and Europeans Genet, Ionesco and many others to prominence for the first time in the USA. The de Lys was renamed for Lucille Lortel in 1981. There is a mini-walk of fame outside the theatre featuring famed playwrights.