Foul Balls and Other Tall Tales 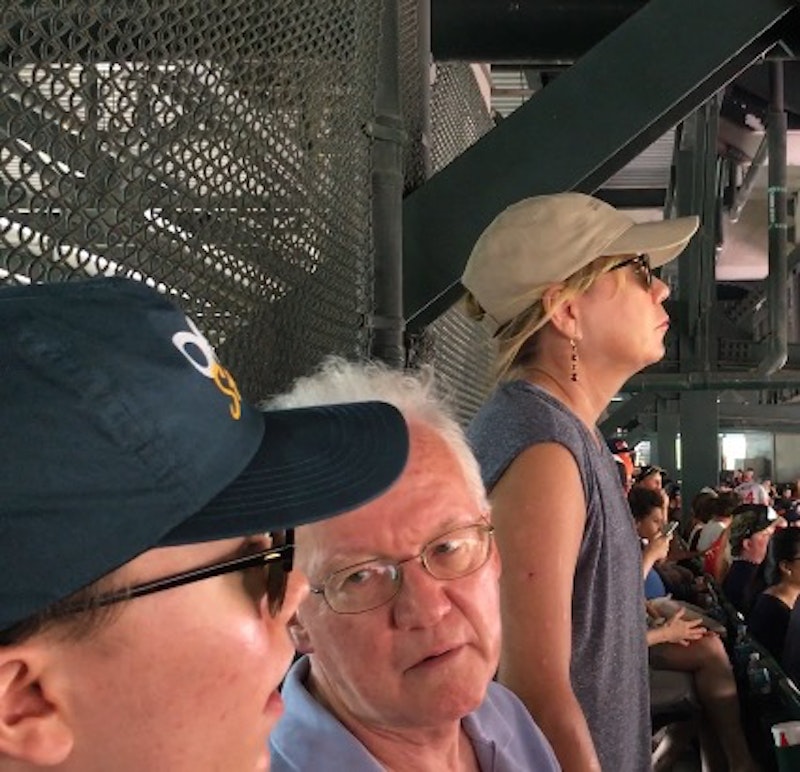 We’ve had a run of unusually finicky weather this month in Baltimore, and that’s messed up my plans to see the Orioles at Camden Yards. I’m a Red Sox fan, and yesterday was the first of a four-game series between the AL East division rivals—with luck, we can forget about the Yankees this year—so what could be better than an afternoon game on Memorial Day with the family? Trouble was, as late as last Friday, weather schematics were all over the place, and when my son Booker finally took the plunge to buy tickets online for the “sold out” game, we were left with slim pickings. It’s said there’s not a bad seat at the O’s downtown park—I’m sure other cities make the same claim—and while Camden Yards is in fact one of the very best MLB venues, that’s not exactly true. We wound up in the very last row of Section 65, underneath a façade—not bad for escaping a sunburn, and the five of us were on the aisle—which meant a lot was obscured. Granted, my Mr. Magoo peepers are nearly beyond repair, but even so, the Jumbotron was only half in view from our seats, and I had to crane my balky neck to see who was up. And forget about the sign that showed each hurler’s pitch count.

Man alive, that’s a lot of carping to start off an account of a lovely afternoon! The Red Sox, behind a complete game from knuckleballer Steven Wright, beat the flummoxed O’s 7-2 and took at least a temporary two-game lead on them in the standings. David Ortiz accommodated the multitude of Boston fans among the official count of 43,922 with a solo jack in the 8th inning, after it-looks-like-he’s-real Jackie Bradley Jr. gave the Sox a 3-2 lead with a solo shot in the 6th. Xander Bogaerts, a monster at the plate, extended his hitting streak to 23, and scrub (for now) Marco Hernandez wrapped it up with a three-run homer in the 8th, allowing Wright to finish without any help from an exhausted bullpen. Some years whenever I attend a Sox game, whether at Fenway Park, Camden Yards, Yankee Stadium or other facilities, the team almost always wins (in 1986, for example, I was 15-0); in other seasons, to further this very slight OCD solipsism, I’m a jinx. So maybe yesterday was a good omen for the Sox to escape two consecutive last-place finishes and allow Ortiz to star in the playoffs in his final season.

My wife Melissa, pictured above on the right, with Booker on the left and Old Man River in the center, is an O’s fan, as is our older son Nicky, but they’re not hard-core, and mostly soak up the intoxicating—that is, if you at all like sports—atmosphere in the park. And there’s always a lot of banter in between innings, or, in this case, during the game, since I could barely see a damn thing. In the middle of the game, Booker excused himself to hit the john, and when he came back it was with a foul ball—allegedly—in his hand. He was delirious in a jokester’s patois, telling me—I’ve never snagged a foul ball in some 1,000 games over many decades—that once again he topped his dad. Nicky and Leigh Ann called time, asking just how exactly Booker came upon the ball. After he said he found it in a bathroom stall—which probably meant it was a five-year-old’s souvenir that he somehow forgot in the excitement, or indigestion from too much cotton candy and ice cream—Nicky correctly nixed Booker’s feat as chintzy at best, and maybe even a downright fib.

That led to an explanation to Nicky’s girlfriend that her beau wasn’t exactly on solid footing here. See, back in ’99 or so, when Nick was a pup, my brother Jeff and I played hooky from work and brought him along to a Sox game at Yankee Stadium, along with four or five New York Press colleagues. At one point—we were in box seats just off home plate—a foul ball came to us, and the fellow next to Nicky snagged it, but then my larcenous son wrested it out of his hand. The young man, around 30, was at first kind of ticked off, but his companion, bless her heart, gave him a look that said, “Aw, that boy is so cute in his Red Sox uniform, c’mon!” My brother Jeff just shook his head, and doubled over in laughter, and I apologized to the rightful owner, but he was cool—I mean, really, it was a lose-lose predicament for him—and I bought him a beer and any remaining tension was squashed.

Oh, and not a raindrop fell during the game, which meant had we booked tickets several weeks ago our seats would’ve been tops. But then… no “foul ball” for Tall Tales Booker.