Stop If It Hurts

If the antiwar movement has to resort to cyber-terrorism, we will. 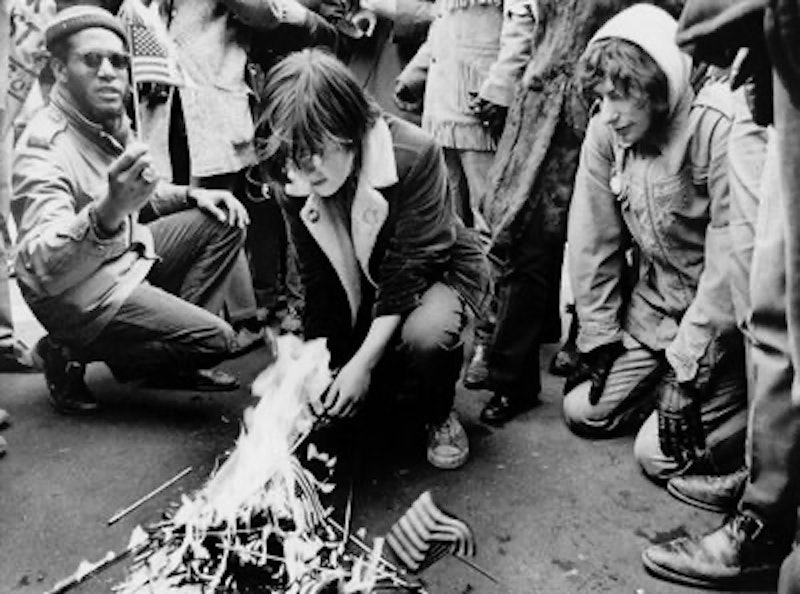 I vividly remember Nixon’s second inauguration. January 20, 1973: I piled into a van with a bunch of other hardcore freaks and we headed down to DC with a load of pot, acid, meth, a few bottles of Boone’s Farm Apple Wine, and a boatload of attitude. The 1972 presidential election was the first one after the voting age was lowered to 18 (along with the drinking age). Former President Lyndon Johnson had once referred to Nixon as “slipperier than six eels fucking in a bucket of snot.” Bobby Kennedy had praised his opponent, George McGovern, as “the most honorable man in the Senate.” We were outraged. We were fully aware of the Watergate burglary and the ongoing investigation. We wanted an end to the war, immediate withdrawal, and nothing less.

We left around dawn from Rancocas Woods, NJ. The van was a raw Econoline, not a conversion. We had lots of pillows, blankets, and sleeping bags. It was cold, but between the pot and the wine, we managed to stay warm. Lots of James Gang, Steppenwolf, Allman Brothers, Byrds, and Grateful Dead on the 8-track tape player. We parked the van, dropped the acid, and made our way to the Washington Monument with a case of Boone’s Farm in an old suitcase. There were already about 50,000 people there, chanting and waving signs to keep warm.

It was all about the war. It wasn’t about the rights of transgendered anorexics to free liposuction or semantic hairsplitting. Nomenclature hadn’t yet taken its place in the pantheon of the Left. It was focused and powerful, a growing movement, striving to be inclusive. All were welcome. It was all about reaching out.

I had recently managed to evade conscription by claiming devotion to Charles Manson as the Second Coming of Jesus Christ, but still carried my draft card, as required by law. At a certain point, the acid combined with the cold to overwhelm the warming effects of the pot and wine, and several of us tore up a picket snow fence and build a bonfire. We stacked up an impressive pile of kindling before we lit it. Some media guys came over. I whipped out my draft card, and suggested that others do likewise. Some middle-aged Birkenstock liberal in the crowd scolded me: “What are the people back home going to think when they see this on TV?” I responded succinctly, in spite of the acid, or maybe because of it, “They’re gonna think we’re fucking cold, Bwana.” We lit the fire with our draft cards. It was glorious.

That night we retreated to a house in Georgetown, where we binged on crystal meth, Boone’s Farm, and crazy sex until dawn. We slept all day, and made our way back to Jersey the next morning.

I withdrew from all political activity for several months after Ronald Reagan’s reelection in 1984. I went on a very serious meth and vodka binge. I was managing the American Express desk in San Francisco for the largest collection agency in the world at the time. My turf included Silicon Valley, which was ankle deep in CIA blow from Bananaland at the time, and they didn’t jump in feet first. The job was easy, and lots of fun: torturing yuppies on the phone for their cocaine budget. I was really good at it. An American Express representative once dubbed me “The Master Of Ass-Clenching Fear.” Being a bill collector was great when the money was actually out there, simply misplaced up the noses of psychopathic status seekers. I’m sure it’s no fun at all now.

After two terms of Clinton, and two of W and Obama, I would’ve voted for Charles Manson if he were the only other choice. Voting for Trump was easy. He’s no Charles Manson, but if he keeps even half of his promises and manages to avoid assassination, we’ll be in vastly better shape two years from now. If Trump betrays his constituency, there will be hell to pay. We are just about out of patience. He has one mandate to fulfill: STOP THE FUCKING WAR! Everything else is window dressing. If the antiwar movement has to resort to cyber-terrorism, we will, rest assured. Think about that. Stop if it hurts.