Alexander Anderson, the first standing doctor at Bellevue, got his medical license at 20, fought yellow fever, and lived to 95. 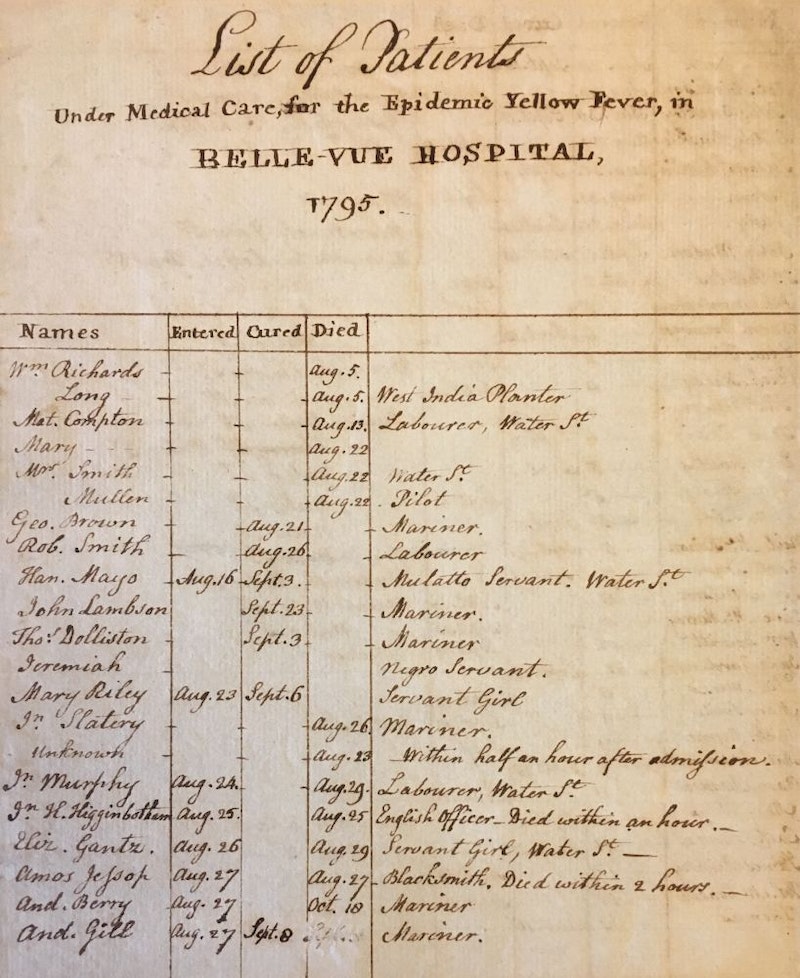 I’ve tried to remember what I’d accomplished by the time I turned 20. Most of a college education, seven or eight fun jobs, a slew of New York Yankee games attended, and a lot of beer consumed. I could’ve done better. This soul-searching was brought to the fore by my understanding of what Alexander Anderson accomplished in the same amount of time. I’m once again ashamed.

Anderson got his medical license at 20. I’m sure he’s not alone in this achievement, but he did it in 1795. Perhaps it was “easier” to be licensed as a physician back then, regardless, it was Al’s second choice; his mother pushed him into the profession. Prior to becoming Dr. Anderson, he was an accomplished engraver—a job he preferred. Moms can be tough to make happy.

He then became the first standing doctor at what’s now Bellevue Hospital. (Bellevue opened in 1736.)  One issue that kept Bellevue, and Dr. Anderson, exceedingly busy was yellow fever. The viral disease, transmitted to humans by mosquitoes was prevalent in tropical locations, but spread in New York and included many in the general population, with a significant concentration in poor areas, hence, the cases at Bellevue, which served the underprivileged, as New York’s first public hospital.

The initial outbreak was in 1795, when Anderson was 20. In the late summer and early fall of that year, more than half of 240 yellow fever patients died at Bellevue. Another outbreak followed in 1798. This one, at least for Anderson, turned out worse than the first. He lost his wife, Ann Van Vleck, to the fever, and then his infant son. It seems enough tragedy to fill one man’s life.

While continuing to treat patients, Anderson wrote to his brother John, almost daily, sometimes with great humor about his work at the hospital. John succumbed to the fever. Both of his parents died in the outbreak as well. Records indicate that the outbreak was also responsible for the death of a number of Dr. Anderson’s close friends. To recap: mother, father, wife, son, and brother. When Mark Twain was told of his daughter Susy’s death, he wrote that it was a wonder a man could receive such news, “...and stand.” When Anderson wrote about this period of his life, he stated, “...this succession of calamities seemed rather too severe.”

You may wonder, as I did, how Anderson himself lived through the fever outbreaks. I don’t know. Regardless, he not only avoided yellow fever, he lived to 95—and so I’m thinking, I have some years to catch up. Onward!