Someone Forgot to Move the Elf 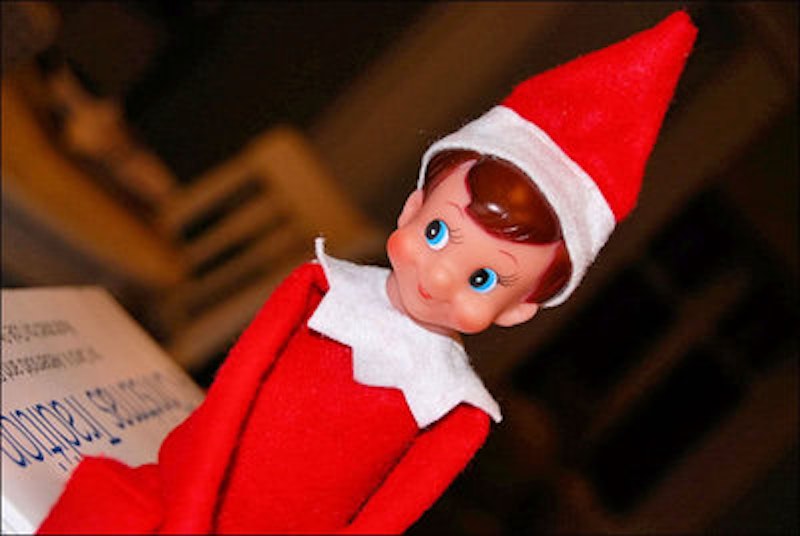 Christmas was all fun and games until the Elf on the Fucking Shelf came along. Now motherhood is judged daily on social media—how many hours do you spend arranging your shelf elf into adorable, mischievous poses? Oh you don’t have an elf on a shelf, because you don’t celebrate Christmas? Well, your kid is going to be mocked at school because all the other kids’ moms are arranging holly-jolly elf sleigh ride scenes in flour while they sleep.

My mom, a hipster before there were hipsters, did the elf thing before it was boxed by Hallmark. So I use an actual thrift-shop vintage elf in a glittery polyester suit (creepy) versus the store-bought version (creepy and cheesy) in order to secure good holiday behavior.  The elf is watching. I don’t have time to position elf into creative activities with candy canes, nor would I remember to do it every night for a month, so I’ve always farmed out the task of magical elf North Pole transportation to my older kids. This way they can keep the spirit of Christmas alive by helping my younger kids search for the damn thing in the morning.

This year, since my 21- and 16-year-old daughters have completed their years on the job, my nearly-12-year-old daughter joined the ranks of elf movers and only my son, nine, is left believing in Santa. Everyone in the family recognizes the precariousness of his belief in Santa. I think we all know he’s in the terrible stage of not really believing, but pretending to believe. None of us is ready to face the first family Christmas without any Santa-believers, my son seemingly included.

If someone forgets to move the elf, I say “Oh, good, well that means you didn’t do anything wrong so the elf didn’t have to tattletale on you to Santa.” So I did that one day, but the next day he asked why it moved since he hadn’t done anything wrong. The tiniest furrow in his brow made me wonder: skepticism, or genuine worry because he still believes? Pass the Polar Express DVD.

But then, it happened.

He came down the steps to the kitchen. The family was busy making sandwiches, pouring breakfast milk, packing backpacks, the usual hectic morning routine. My son walked into the room, glanced the elf in its same shelf position as the day before. “Someone forgot to move the elf,” he said.

There was instantaneous, complete frozen silence. No cereal spoon clinked, no refrigerator door closed, no coffee cup landed on the counter. Our family passed nervous glances around like a manic Olympic volleyball team. Everyone knew the magnitude and ramifications of this simple comment. He’d accidentally told us he didn’t believe in Santa Claus anymore, and not a single one of us was ready to hear it, least of all him.

He quickly recovered, adding nervously, “I mean, I guess the elf didn’t go to the North Pole last night.”

We collectively exhaled. Cereal was eaten, snacks packed, coffee sipped. Christmas business as usual continued in our family, even as each and every one of us knew the elf wouldn’t be back next year. And we’ll all miss the creepy little fucker.