The Seahawks/49ers game was not to be missed. I missed half of it. 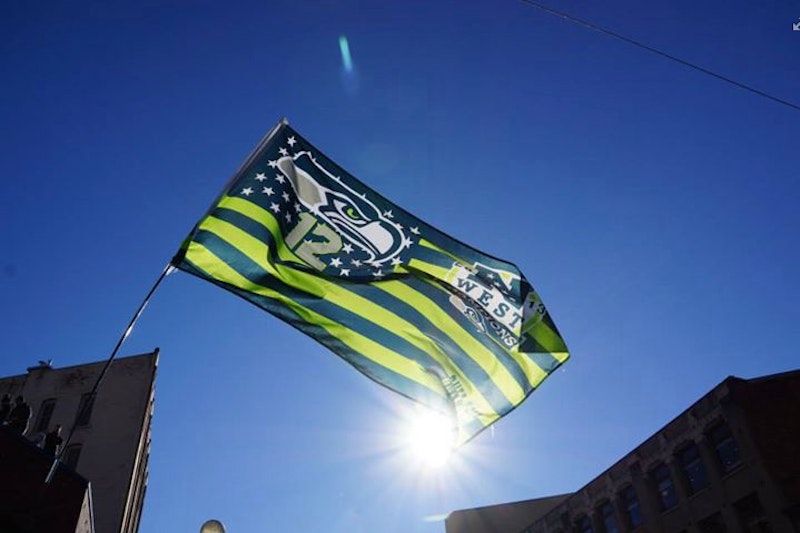 It may be hard for people outside Washington to understand the total grip of Seattle Seahawks fandom here, so let me tell you two-and-a-half stories that happened the other day. The first one is short. On Sunday, after breakfast in Bellingham with my kid brother, I was turning the Subaru into traffic. A couple stepped in front of the car. Brakes were slammed. All curses died in my throat after I looked up and saw the woman was wearing a Seahawks jersey. It was game day, after all.

And therein lay a hell of a problem for me. The Claire vg Thomas Theatre in Lynden was running its last show of A Christmas Story: The Musical that day and I’d bought one of the few remaining tickets. The play started at two. Kickoff for the Seahawks game was 1:30 and this wasn't just any game. It promised to be sourpuss San Francisco coach Jim Harbaugh's downfall if the Seahawks could comfortably put his 49ers away. Few men are greater fans of A Christmas Story than yours truly, but Jean Shepherd's classic we will always be with us. Games like this don't come around often.

As I drove to the theater, the Seahawks were ahead by a beak. It was one of coach Pete Carroll's textbook three-point openings, thanks to Steven Hauschka's golden foot. I darted into A Christmas Story just in time for the curtain. There were two Seahawks flags on the stage. Co-directors Susan Duncan and Laura Nelson joked in opening remarks that there could be only two possible reasons why we would be watching a play at this particularly historic moment. Either we didn't care a whit for football or we’d been coerced.

The directors wore Seahawks beads and led the crowd in call-and-response cheers before they took the flags backstage with them. They also sternly warned us that nobody should cheer or do anything to give the score away during intermission when we powered our cellphones back on. It would be horrible to ruin it for those who were DVRing it to watch right after. Wreck that for them and somebody just might, well, shoot your eye out.

Good luck tearing your mind away from the big game after that display! Even the stagehands proved to be in league with the NFL. Rather than wearing the usual all-black clothing to deflect attention during the set shuffles, one of the grips sported a Seattle jersey, making it that much harder to get into a cherished childhood story.

In spite of that, I managed to get my head in the non-game for a solid 15 minutes. The familiar great gags helped take my mind off the Seahawks, as did the new song-and-dance routines that aren't in the movie. For the most amusing number, several female cast members dressed up like the lamp that was Ralphie Parker's Dad's “major award.” They strutted their stuff as the old man basked in his ridiculous glory. And we closed out the act with a number that seemed to put Ralphie's stymied attempts to get a Red Ryder Carbine Action 200-shot Range Model air rifle for Christmas on par with the torments of the damned.

That devilment should’ve been enough to anticipate the second act. Indeed, it would have held me in its thrall but for the call I put in to my roommate Evan during the break. The Seahawks' third period had just started, he said. San Francisco was up seven to three. Seattle is an amazing second half team but this was still anyone's game and I was missing it. That was intolerable. Heading the directors' instructions, I didn't holler or spill the beans on the way out.

So I didn't see Flick lick the pole or Ralphie get his BB gun in the second act. On the plus side, I did get to watch Marshawn Lynch practically stroll into the end zone for a touchdown and gladhand most of his colleagues in celebration. And I saw Harbaugh's head nearly burst when one of his guys drew a highly questionable penalty for roughing Seattle QB Russell Wilson. I watched Colin Kaepernick lick his hand like a madman and repeatedly go for it on the fourth down, and fail. Who needs to see Ralphie whaling on Scut Farkus when you've got that?