The Girl in The Window

Fiction: the glass goes both ways. 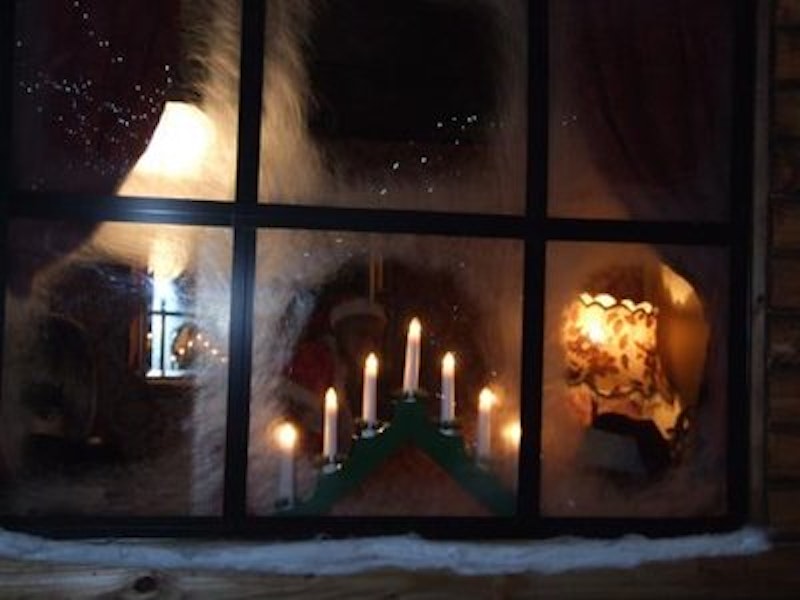 Many years ago in a quieter New York City neighborhood, there was a girl. She was on the cusp of being a woman—not a teen, but not quite old enough to worry about life’s buffet of adult problems. She worked in the mailroom at The New York Times, dreaming of one day seeing her byline in the paper, knowing such a silly fantasy wouldn’t happen for years, if ever.

She lived in a small apartment over a diner-style café in a standard-issue brick three story building on the corner of a Greenwich Village street. When she wasn’t working the long hours at the paper, she’d come home to her tiny writing desk, a castoff she’d found one day in the alley behind the newspaper, no doubt tossed there as a result of an office upgrade. Atop the desk was an old Underwood typewriter she’d found in the same alleyway.  She was amazed at the things people threw away. Beside the girl’s typewriter was an oil lantern and a small Ball jar filled with a few pine and holly branches she’d snapped off from trees on her walk home one day. She loved the smell of fresh greens, but hadn’t enough money for a Christmas tree.

She lived with her beau, a kind-hearted, selfless boy also on the cusp of adulthood. He worked long days in newspaper route delivery, distributing the huge stacks of newsprint that rolled off the loading docks daily to many newsstands around the city. He cherished her with the kind of love that showed in his eyes each time he looked at her, and the love in her eyes was reflected in return. Neither set of their parents, who lived states away, knew they were sharing the apartment, as such news would’ve been a scandal at that time. They hadn’t known each other long enough to speak of marriage, but when they met at the newspaper, each seeking a roommate, the obvious living arrangement had emerged as their feelings for one another grew.

Directly across the way from the small bay window where the girl’s writing desk was centered was an enormous Victorian mansion used for fancy weddings and other gatherings; every few weeks a grand event was held there. Massive velvet curtains drawn aside, the candelabras and chandeliers glowed from within the high ceilings. Three stories high, the building’s floor-to-ceiling windows revealed men and women dressed in the city’s finest fashions as they danced and chatted and carried crystal glasses.

The girl loved to sit at her writing desk, pecking away at her typewriter and filling the drawers with stories she wished she had the nerve to send to the paper, and watch the elegant partygoers. Her tiny oil-burning desk lamp was the only light in the room on this particular Christmas Eve night as she watched an elaborate holiday party across the way. Stunning horse-drawn carriages and the newest automobile models brought party guests in fancy fur hats and coats to the mansion’s oversized double front doors. The walls of her simpler apartment building were thin enough to hear the sounds of the small orchestra playing Christmas carols when the grand doors opened. A massive 15-foot-high Christmas tree was the center of the main hall’s attention, adorned with silver and gold and crystal ornaments.

Finally, she heard footsteps on the stairs—her beloved had arrived home from his long workday. She’d prepared a simple meal, a single candle the only light on the wooden dining room table. A small gift of warm gloves she’d found at a castoff shop lay on the table wrapped in newspaper and tied with one of her hair ribbons.

From three stories up in the mansion, a beautifully dressed woman parted one of the mansion’s heavy curtains to open a window and get a bit of fresh air. She dusted off her silk gloves, adjusting the gold and pearl-feathered hair clip and smoothing out the lace and silk gown over its crisp crinoline. It was then, looking out the window to breathe in the cooler air, that she noticed the scene across from her: a dark building, lit only by candlelight. The plainly-dressed girl sat at the desk inside the bay window, the lantern revealing her simple holiday decoration: some pine branches and holly berries. She watched as the girl typed.

Then she observed as the girl appeared to hear something, got up and went to the door. The boy entered, embraced her tightly, and handed her a small boxed gift, which the girl brought to the table and placed next to the newspaper-wrapped gift. Smiling, she embraced him again, their joy in seeing one another clearly more important than the meal or the gifts. The woman, surrounded by all the finery the city had to offer, all the money her family had made sure she’d never have to worry over, watched the holiday scene taking place across from her, and longed for its simple, humble beauty and the clear, warm glow of the love within.