I’ve always wanted to live in a haunted house. 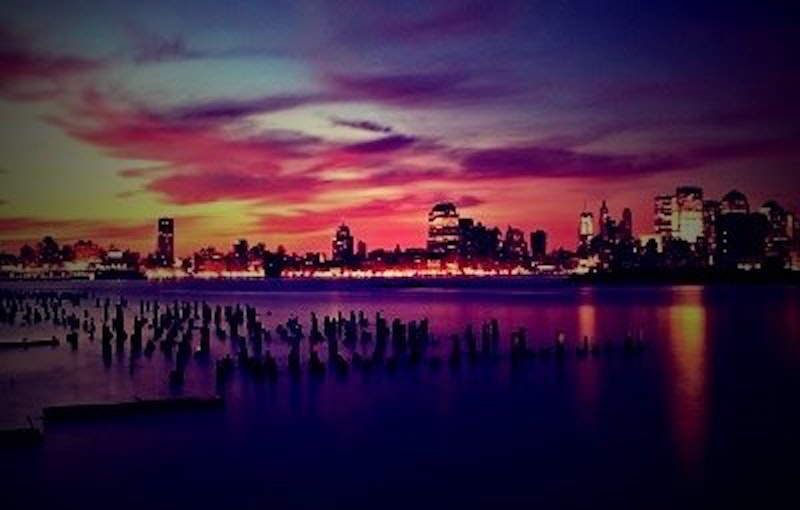 New Jersey is entirely Gothic, in every way. There’s a dark brooding isolation there, from the embattled putrefying cities to the quietly sinister suburbs, from the glittering Lost Boys boardwalks of the Shore (Santa Cruz writ large) to the misty bogs of the Pine Barrens. In the cities, especially Camden, the horror is right in your face, in broad daylight. In the suburbs, the Pines, or the Shore, it’s more of a sense of something not quite right, especially at night. It’s definitely my kind of place. I’ve always wanted to live in a haunted house.

The natives are gritty and confrontational, in contrast to the consistently passive-aggressive Californians. People in New Jersey are much more likely to come right out and say, “Fuck you” as opposed to “Have a nice day,” or “I don’t give a shit” instead of “Whatever.” Interestingly, the motorists are vastly more courteous in New Jersey, perhaps because of the absence of suppressed aggression. I’m not a psychologist. Put little bright shiny Law Of Attraction aficionado Rainbow Sunshine from Mill Valley into a 5000-pound SUV on Route 101 South during rush hour and watch her turn into Tony Soprano in five minutes.

I’d left Manhattan and travelled across the country and back in search of authenticity, only to find it in my home state, just a short drive away. As Edward Albee once wrote, “Sometimes it’s necessary to go a long distance out of the way in order to come back a short distance correctly.”

I hunkered down in my cousin’s den in Cherry Hill and began looking for a place to live, and perhaps die. I’m old. I’d been in touch since the final months in Mountain View with an old friend who’d grown up across the street from me in Camden, Tim Kerry, and he’d assured me that he had lots of contacts with good cheap rentals in the Pine Barrens and near the Shore. He was living in a house he’d inherited from his parents in Browns Mills, a little postage-stamp of a town in the Pines consisting of a couple of bars, a pizza joint, and a gas station. I also scanned craigslist and the local papers, trying to get a feel for what was out there.

I’m on a fixed income, collecting Social Security. I was looking for something small and isolated in the range of $400-$500 per month. There wasn’t much of anything anywhere in that price range. Studios in Camden were going for $600. You’d have to pay me to live in Camden. Tim assured me he had several options within my price range, so I relaxed a bit and made arrangements to drop down for a visit.

Meanwhile, my 94-year-old aunt was deteriorating rapidly. She was having a lot of trouble eating, and my cousin was taking her to the hospital once or twice a week, always with the same result: they’d run a bunch of tests, tell them they didn’t know what was wrong, and send her home again to suffer through it again until things got critical enough to necessitate yet another trip to the ER. They were running tens of thousands of dollars in high-tech tests trying to figure out what was wrong. My cousin’s nerves were frayed, and my aunt was in mortal agony.

I finally hooked up with Tim down in Browns Mills. He looked pretty bad: his hair was unkempt, his teeth were rotting, and he was dressing like a mental patient, living in filthy sweatpants, tattered dress shirts, and bedroom slippers. The light over the bathroom mirror was out, and when I told him about it, he just said it had gone out “a while ago.” I said that I prefer to know what I look like before going out into the world and offered to buy a new light for the fluorescent fixture, but he just dismissed the offer. The house was in an advanced state of decay, the porch ceiling crumbling due to a leak, linoleum coming loose in the kitchen. I asked after his younger brother, Lee. He told me that Lee had died of liver cancer at the age of 50 back in 2009, not long after their mother died. Their father had passed away decades ago. Looking around, it became clear to me that Tim hadn’t so much as dusted the place or replaced a light bulb since then. When a light went out in that house, it stayed out. It was like a low-rent white trash version of The Fall Of The House Of Usher, set in the Pines.

Tim had been the first person to turn me on to the myriad mysteries and inconsistencies surrounding the JFK assassination. We’d gone to DC to protest the Vietnam War together on numerous occasions in his old battered Ford van. He turned me on to my first dose of mushrooms, back in 1969. The last time I’d seen him was in 2004. There was a blizzard headed in over the Atlantic, due to hit Ocean City, NJ, in a big way, maybe eight to 12 inches. Daisy had never witnessed a blizzard on the ocean, she was from fucking Florida, so I drove her down and took a room on the fourth floor of a hotel on the boardwalk overlooking the beach, the Port-O-Call. We had lots of pot and booze, and some Salvia Divinorum extract I’d acquired. I put a National Geographic map of Antarctica on the wall of our hotel room and invited Tim over to party.

He was suave and well-dressed. He had a funky little used bookstore in Pleasantville and a regular column in the local paper covering nightlife at the Jersey Shore. He was suing the CIA to get reams of documents related to the JFK assassination released. He was upbeat, robustly healthy, articulate, good-humored, and just generally fun to hang out with. We had a great time watching the boundary between sea and sky dissolve before our eyes through the great huge sliding glass doors of that room, swilling down beers and shots punctuated by joints and sublingual doses of Salvia. Daisy remarked on how “utterly cool” the guy was.

Now, in 2014, consumed by a relentless and cancerous grief, he was barely a shell of the guy I admired and loved. He was shuffling around this decaying house in Browns Mills, attended by an inarticulate and openly hostile roommate addicted to Vicodin who rarely paid any rent, a septuagenarian punch-drunk deaf ex-boxer who could only speak in grunts and barks and never shut up, and his girlfriend, a married woman with three bi-racial kids who was shitfaced drunk by noon every day and incapable of allowing a single sentence to be uttered in her presence without interruption. She’d never been out of Browns Mills, and she may very well have been the stupidest non-retarded person I have ever met.

Her most memorable pronouncement came one morning after we’d imbibed our obligatory hair-of-the-dog celebrating the departure of the Vicodin junkie for his minimum wage construction job. We were sitting on the dusty collapsing porch drinking wine at 10 o’clock in the morning, smoking some pot, and out of the clear blue sky, apropos of nothing, she said, “I’ve been thinking about words. There are so many of them, and they all mean something, and they all rhyme.”

I’d had it with this bitch and her constant interruptions, so without hesitation or pause, I replied, “Nothing rhymes with circus.” It shut her up for a good 15 minutes while she scanned her tiny defective brain for just one word to refute my assertion.

It became increasingly obvious that Tim had no connections to anyone who could assist me in solving my housing dilemma. He spent his afternoons at one of the two ghastly bars in that town, a filthy and somewhat hostile joint called the Belly Buster, and his nights with his brain-dead girlfriend and his junkie roommate. He was working weekends for $17 an hour as a “crisis actor” at nearby Fort Dix in war game scenarios involving impersonating Russians and dissident American citizens. He vigorously supported the atrocious NATO destruction of Libya and the brutal assassination of Moammar Gaddafi. He was holed up in that slowly decaying dusty molding H.P. Lovecraft place surrounded by bookshelves overflowing with manila envelopes stuffed with declassified material from CIA related to the JFK assassination. My best guess is that he strung me along with the rental connections bait just to have somebody from his past in possession of more than six firing brain cells to talk to.

Meanwhile, back at my cousin’s house, the ER was becoming a revolving door for my aunt. The capitalist doctors were sending her home to suffer until the next crisis. They openly told my cousin that my aunt’s pacemaker, the one they’d installed when she was 92, was the only thing keeping her alive. Who installs a pacemaker into a 92-year-old human? What’s the point? Profit, plain and simple. Retaining the customer.

Daisy was safely ensconced in Gainesville, Florida, in a spacious two-bedroom doublewide she’d acquired for a mere $10,500. We were in touch, and the more she talked about Gainesville, the more I researched it. The more I researched it, the better it looked. Unlike most of Florida, it has its own power grid, independent of outside systems. Also unlike most of Florida, it sits atop an amazingly clean aquifer, unspoiled by lawn chemicals or pesticides. It’s a college town: smarter, smaller, and slower, with a thriving arts scene. The rents are ridiculously low, especially if you wait until September or October, when the University of Florida students are all settled in. It’s vaguely creepy, surrounded by deep fecund and snake-infested Florida forest on all sides, an hour-and-a-half to the Atlantic, and something of a magnet for serial killers. Race relations in Gainesville have been cool and easy for a hundred years. The cops are civilized, and while pot may still be illegal, nobody cares.