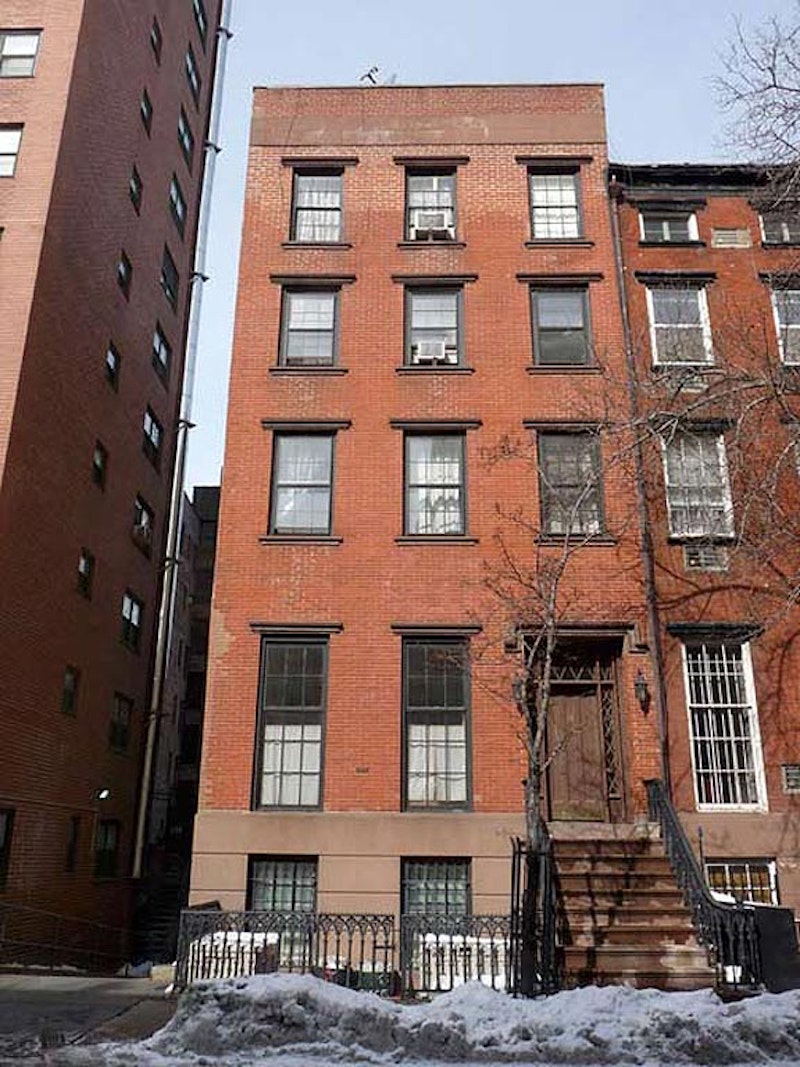 Charles St. runs from Greenwich Ave. to West St. just north of W. 10th. The principal heir of Sir Peter Warren, who owned the land where Charles St. is found in the colonial era, was Charles Christopher Amos, and those names were applied to streets when they were built by 1800. Amos St. became a western extension of W. 10th St. in 1857. I recently entered the Village, because the cabin fever was becoming too much. After my tear ducts reacted to the cold inopportunely and my eyes were annoyingly blurred, I scurried back indoors, but not before squeezing off some photos of the West Village in winter.

Most of the buildings on Charles St. went up between the 1850s and 1890s, with a couple of older and younger exceptions. #11 Charles St. (shown above) for two years (1925-1927) was home to journalist/crime novelist James Cain, three of whose books became major motion pictures: The Postman Always Rings Twice (1934), Double Indemnity (1936) and Mildred Pierce (1941). Cain was born in Maryland and in his youth reported for the Baltimore American and Baltimore Sun, where he befriended his mentor, H.L. Mencken. During his two year in NYC he was an editorialist for the New York World and later The New Yorker; he moved to southern California in 1932, but other writers adapted his novels for film. 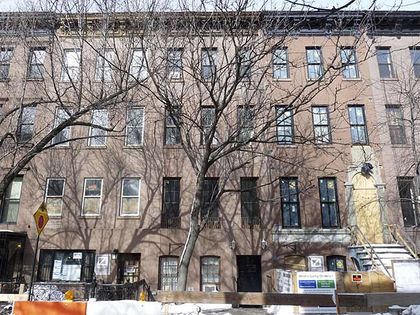 #39 Charles St., the building in the center behind the tree, was home to the “Little Flower,” Fiorello LaGuardia, from 1914 to 1921. He is rightly famed for his tenure as NYC Mayor from 1934-1945, but while living here, he became Deputy Attorney General of New York in 1915, and in 1916 was elected to the US House of Representatives and served there until December 31, 1919. During World War I LaGuardia joined the US Army and rose to the rank of major in command of a unit of bombers on the Italian-Austrian front. In 1919, LaGuardia ran as a Republican for the President of the NYC Board of Aldermen (the equivalent of today’s City Council President) and won. He returned to Congress in 1922 and served 11 years before his election as NYC mayor. 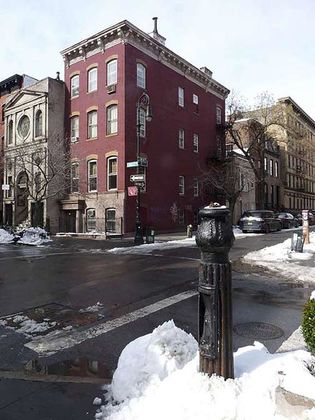 Though there are new versions of Bishop Crook lamps by the thousands in NYC today, at the corner of Charles and W. 4th is a bishop crook remnant—just the base is remaining from a former Type 6 BC (for Bishops Crook). Type 6’s are recognizable by their thinner bases, as they were generally deployed on narrower streets and sidewalks. This remnant used to list noticeably until restored to an upright position several years ago. There’s only one Type BC in working condition remaining — and that’s a restored lamp on Warren St. in Tribeca.

Until 1936, an unusual condition existed on Charles St. between W. 4th and Bleecker Sts.—the north side of the street, and only the north side of the street, was called Van Nest Place (after a former estate) and had separate house numbers. In 1936 the entire street, on both sides, became Charles St. This kind of arrangement was once common but can’t be found in NYC anymore, although there’s an arrangement for Leroy St. in the Village, which turns in to Saint Luke’s Place between 7th Ave. South and Hudson St. at a bend in the road between the two streets. Leroy St. resumes west of Hudson Street. 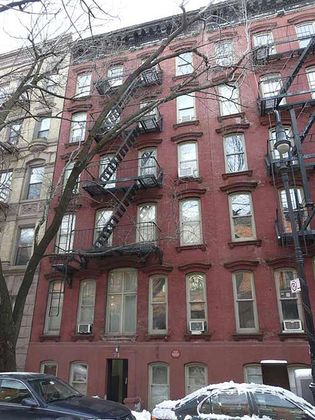 Woody Guthrie (1912-1967) is famed for living on Mermaid Ave. in Coney Island in the 1940s and 1950s in a building that has since been knocked down, but before arriving there, he briefly lived in this building (December 1942 to May 1943) at #74 Charles St., where a plaque has been installed by the Historic Landmarks Preservation Center. Guthrie, along with Pete Seeger, was a member of the Almanac Singers, who lived communally nearby at #130 W. 10th St., which they called The Almanac House; “Almanac” was inspired by the Old Farmer’s Almanac. The singers’ left-wing views earned them investigations by the FBI and they disbanded during World War II, but they re-formed, minus Guthrie but with other additions, as The Weavers in 1950, and enjoyed several Top 10 classics including a version of Leadbelly’s “Goodnight Irene.”

Dodging around the corner to #393 Bleecker St., which doesn’t look like much on the exterior, but opens up to a wide courtyard on the interior. In the late-1920s, literary professor/author/poet Mark Van Doren agreed with like-minded neighbors to take down the back fences separating their properties that faced Perry and West 11th Sts. and created a mutual yard shared by all. Van Doren was associated with Columbia University for over 50 years, between 1920 and 1972, mentoring Allen Ginsberg, Jack Kerouac and other poets. At least one of the houses surrounding the so-called Bleecker Gardens was built before 1820.

Mark Van Doren’s son, Charles, competed successfully in 1959 on the Twenty One quiz show—before it was revealed that the show’s producers were slipping him the answers in response to his popularity. After the scandal broke, Van Doren moved with his family to Chicago, where he worked as an editor with the Encyclopedia Britannica. 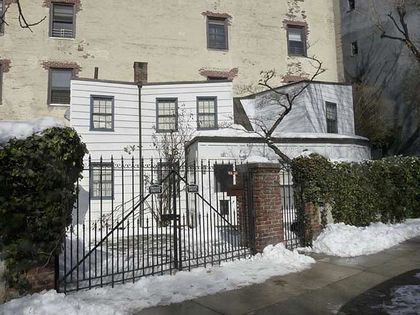 It appears as if 121 Charles, at the corner of Greenwich, has been here forever but it’s actually a 1967 interloper. It’s an 1809 farmhouse moved here by Sven and Ingrid Bernhart after it was discovered after a demolition on York Ave. and E. 71st St., and trucked downtown to this spot on March 6th of that year, along with some of the cobblestones adjacent to it: hence the building’s nickname “Cobble Court.” While uptown it had been the home of author Margaret Wise Brown (1910-1952; Goodnight Moon).

The building hasn’t been landmarked, as the Landmarks Preservation Commission sometimes doesn’t designate buildings that have been altered considerably from their original condition. 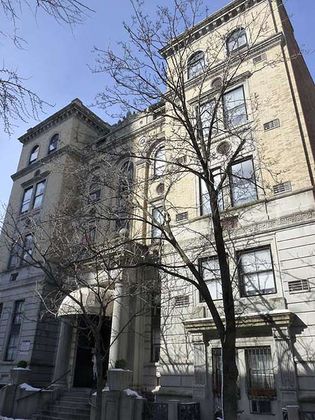 At 135 Charles St. near Washington is a monumental police station. The grandeur was probably lost on the cops and crooks who went in and out of here every day. It was originally the 9th Precinct, designed by John DuFais and built in 1897, an era when most of NYC’s grandiose works went up. The precinct moved to a blander building on W. 10th in 1972, becoming the 6th Precinct; as long ago as 1978 the Number 9 was converted to apartments, beating the old NYPD Headquarters on Centre St. in that regard. It’s now known as Le Gendarme. It has one of the larger sculptures of the NYC Seal you will see on a building, though this one is a variant of the usual one (the Dutch sailor is holding an oar instead of a plummet). 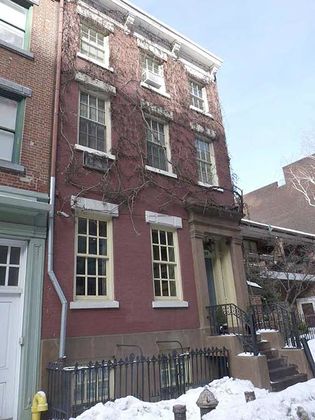 #159 Charles, between Washington and West, was constructed in 1838 for merchant Henry Wyckoff. Overshadowed by the Richard Meier glassy apartment towers at Charles and West Sts., #159 and #161 are the only two 19th century-townhouses remaining on the block. Of the nine lots owned by Wyckoff on the block, only this one is here now. Ivy covers the outside wall in spring and summer. 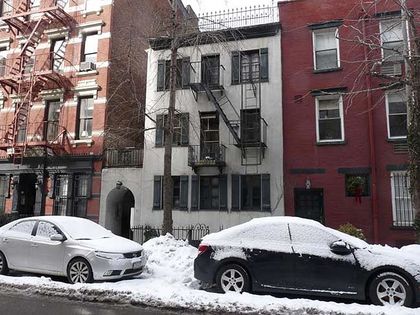 Shifting over to Perry St., the Spanish-style townhouse at #93, just off Bleecker, has a special place in the heart of H.P. Lovecraft fans. A courtyard leads to a back house, which is the supposed setting for one of the Ghostly Gentleman’s short stories written in 1925 during the Providence native’s “New York Exile.” In “He,” the narrator, roaming around the Village at night, meets a strange man professing to be a historian and antiquarian who has the ability to reveal Village scenes from centuries ago and also the future. The two run into trouble when they disturb Native-American spirits.