Signage of streets and businesses long shuttered, since reopened, or thriving for years. 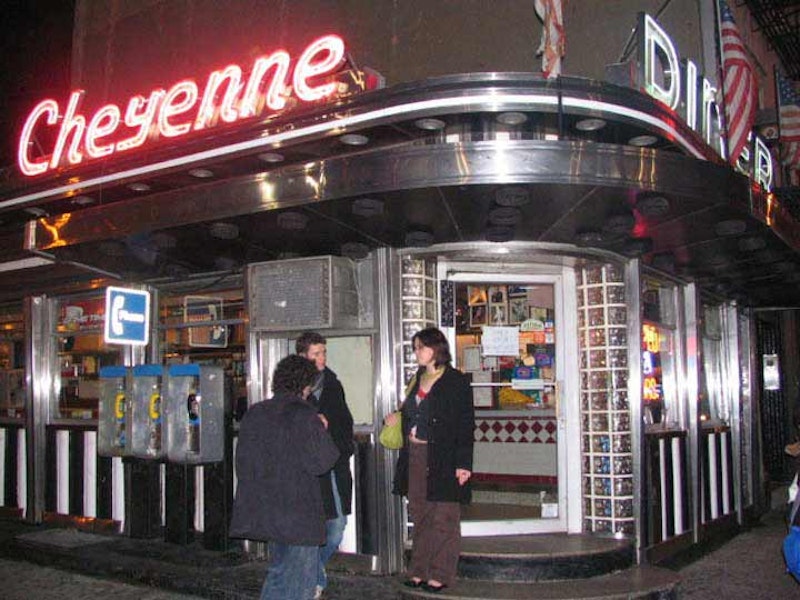 I’ve been a writer, copy editor, proofreader and mechanicals artist since 1981. Before that I swept floors and developed photos in a passport photo studio and stocked shelves in the Brooklyn Business Library. Since 1998 I’ve scuttled about the city in old clothes, taking photos of infrastructure that interests me and inspiration from city chroniclers from the early-20th Century, names like Percy Loomis Spehr, Eugene Armbruster and E.E. Rutter, who don’t spark much recognition today: but their names are all over the New York Public Library’s website of New York City street scenes. There’s no big money or recognition in taking pictures of buildings; only a few, like Berenice Abbott, gained fame. Even the best New York City photographer working today, Matt Weber, hasn’t had much traction; nor did Danny Lyon in his day. For me, it’s become part of my own infrastructure.

This week, I have some signage that has since disappeared, or remains, signifying things that have long disappeared, with one exception. The Cheyenne Diner began as the Market Diner in this location sometime in the early-1940s. The diner manufacturer was Paramount Modular Concepts of Oakland, NJ, in business since 1932. The Cheyenne, open 24 hours daily, was across the street from the massive James Farley Post Office and its 24-hour shifts. Mail processing has largely moved down the street to the Morgan Processing and Delivery Center on 30th St., while approximately 250,000 square feet of the 1.5 million square-foot building was converted to the Daniel P. Moynihan Train Hall, leaving just the famed 8th Ave. post office windows. The Moynihan remains underused as none of its promised restaurants have opened and the MTA didn’t provide public seating, fearing a homeless takeover. It took about 10 years after the Cheyenne was carted away, but a nondescript apartment building replaced it. 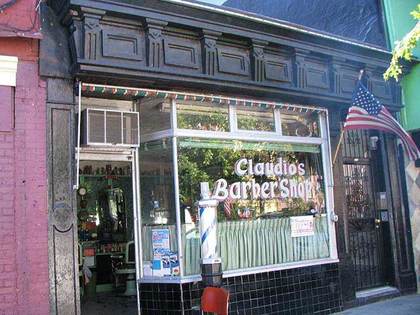 A holdout from the Italian Harlem days was Claudio’s Barbershop, south side of 116th, just west of 1st Ave. I expressed my regrets at not having time for a haircut to Claudio, who graciously allowed me to come in and take photos anyway. He said this was his 80th birthday and he’d been in business 50 years; the barbershop has been there since World War I. Films such as Carlito’s Way and TV shows Law and Order and Third Watch have used the shop for local color, and models in bikinis have posed in the barber chairs for Sports Illustrated shoots. Jimmy Durante and Tammany Hall pol Carmine DeSapio had their locks chopped here. I dropped in and got a shot of Claudio Caponigro by his barber chair, as well as this exterior shot. After I visited in 2011 Claudio moved up the block to a different location and has subsequently closed. 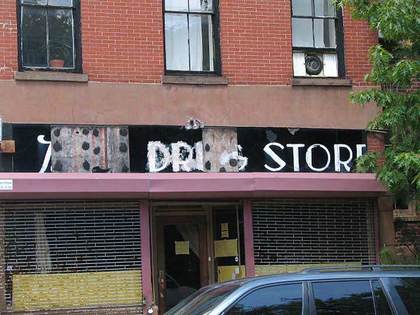 This location in Clinton Hill at Gates Ave. and Cambridge Pl. is now the home of an upscale Italian restaurant, Locanda Vini e Olii. It’s a trend in the 2000s for new businesses to retain, and even restore, old signage from a previous incarnation of the space. Years ago, I got a picture of the sign before the restaurant rehabilitated it. John Dower’s assignment was to restore, and to slightly improve, the fascia lettering originally painted in the 1940s. The substrate first had to be replaced. New opaque black glass was installed for the purpose. The name Lewis needed to be smaller than the original, and higher in relation to the other words, in order to be visible above the rollscreen casing. Dower also italicized the “i” in Lewis to make it conform. The few surviving letters in DRUG STORE were traced before the old fascia was removed to make way for the new. Saved were the D, R, S, T, O. The U, G and E had to be recreated from photographic evidence and existing letter parts. 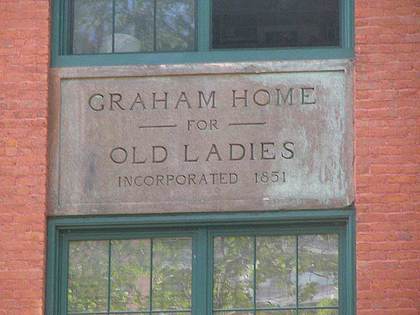 Built by lawyer John B. Graham at 320 Washington Ave. in Clinton Hill in 1851 as the Brooklyn Society for the Relief of Respectable Aged Indigent Females, a refuge for “indigent gentlewomen… unfitted to accept willingly the public asylum provided by the state.” Women 60 and older were admitted who could provide “satisfactory testimonials of the propriety of her conduct and the respectability of [her] character.”

The name of the organization was abbreviated to this rather more prosaic title. The Society carried on into the mid-20th century, and the residents held annual craft fairs and gatherings. By the 1970s and 80s, the Graham Home for Old Ladies was home to the Bull Shippers Motor Inn, which was something of a Home for Shady Ladies. At length the hookers departed and the druggies squatted, and then it became the battered, boarded-up hulk it was when I first spotted it in 1999. A three-bedroom here can now go for upwards of $750,000. The Old Ladies would marvel. 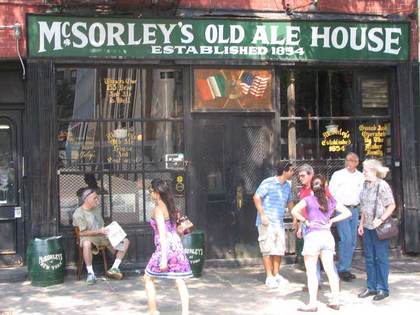 Though McSorley’s claims it opened here on E. 7th St. east of 3rd Ave. in 1854, the late NYC historian Richard McDermott’s research, using old insurance maps, census data and tax-assessment records, indicates it opened in 1862. In any case, it’s old. The later opening date would negate claims that Abraham Lincoln stopped in when he gave a speech at Cooper Union in February 1860. There are hundreds of pictures on the walls; customers have brought them in throughout the decades, and the staff usually finds a place for them.

In New Yorker writer Joseph Mitchell’s era, McSorley’s used four soup bowls for change in lieu of a cash register, one for pennies, nickels, dimes and quarters. Its coal-burning stove is still there, as is the safe, the rack of corncob pipes, and the dust-covered set of turkey wishbones hung on a light fixture. The tradition dates to World War I when soldiers going off to war would hang them. The ones that came back removed their wishbones. In 2011, the city made McSorley’s clean the dust off the wishbones. McSorley’s didn’t admit female patrons until the summer of 1970. At first the bathrooms were unisex until one of the kitchens was converted. 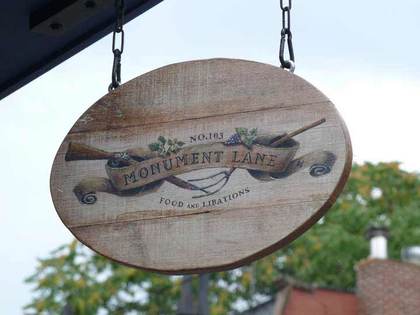 Greenwich Ave. happens is one of the oldest existing roads on Manhattan Island. Originally it was part of an Indian trail in the village of Sappokanican that ran southeast and east to about where Cooper Square is today. Another piece of that trail still existing today is Astor Pl. that runs between Broadway and 3rd Ave. Under Dutch rule the road was called Strand Rd. but by the colonial era the British had made it a military pathway as it ran through the estate of Admiral Peter Warren, the commander of British naval forces during the Revolution. He’d acquired several hundred acres of property in the Village in the 1740s.

After 1762, the road was known as Monument Lane or Road to the Obelisk. In 1762, at the spot where Greenwich Ave. meets 8th Ave. today, the British erected a monument to British Major General James Wolfe (1727-1759) who died in the Battle of Quebec in the Seven Years’ War, but by 1773, before American independence was declared, the monument had disappeared from local maps.  Formerly the Day-O Tavern at Greenwich and W. 12th, the bar honors the former name of Greenwich Ave. 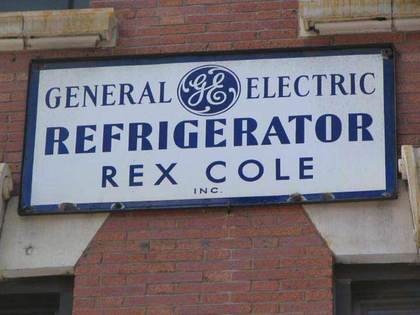 Rex Cole was originally a lamp manufacturer, then his company became associated with General Electric in the 1920s and designed white enamel Monitor Top refrigerators. Famed architect Raymond Hood designed a series of buildings in Bay Ridge, Brooklyn, the Grand Concourse, and Northern Blvd. in Flushing for Cole’s showrooms that either looked like refrigerators or featured them in the design. Most are still standing but have been altered beyond recognition. Enamel signs proclaiming Cole’s GE refrigerators are still found on a handful of buildings around town. About a dozen are left and the typography doesn’t date them at all.