At times I felt like I was there too, along with him for the crazy ride. 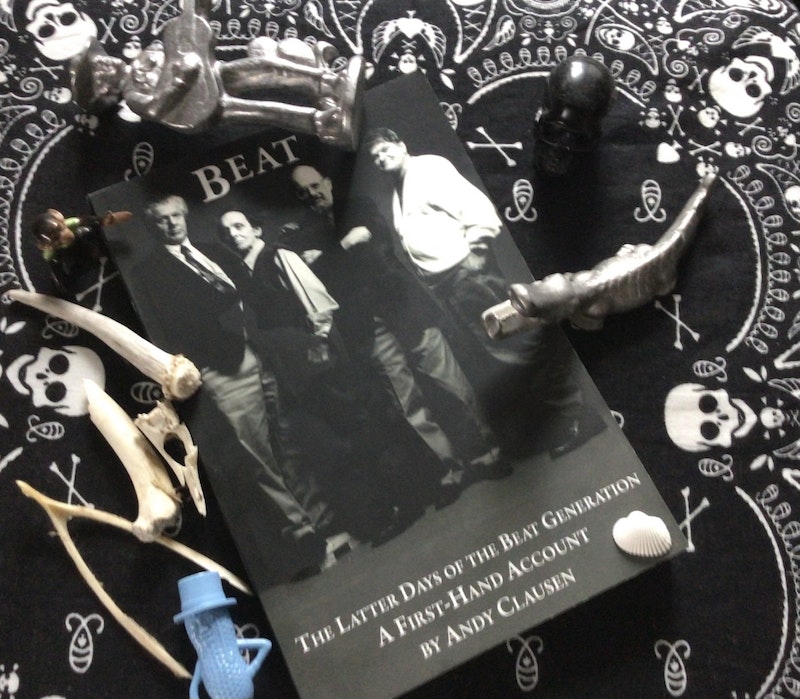 I've read a lot of books about the Beats as a generation and phenomena, biographies that highlight the heavy hitters, Burroughs, Kerouac, Ginsberg, Cassady and Corso. But, it's a rare treat to read a faithful firsthand account from a survivor who was there. In Beat, Andy Clausen bears witness to the original Beats' fat, lean, high, low, and between years.

He was there. At times I felt like I was there too, along with him for the crazy ride. Part confessional, part diary, Beat flows like a time capsule inside a shrine wrapped around the poets' sacred and profane space/place in life. The only true poets that ever mattered to me. Clausen is a poet’s poet. And, there's no mistaking the chosen path, getting lost along the way to discover essential truth, the destiny of all free spirits.

There were moments where I went pleasantly astray while reading of his journeys, at times feeling right there, lost in the moment with Clausen traveling through the world of poetry, people, and places. Some of them familiar, others new and strange enlightening discoveries. This homage is chockful of in-depth personal observations about my poetry heroes. There’s no pretense or holier-than-thou judgments.

Clausen nails it when defining these literary outlaws. He exposes their humanity, those naked frailties we all share, the compassion, or lack thereof. Great poets don't equal great human beings. It reveals shortcomings, prejudices, warts, and all, mere mortals. I'm hip to the myths, legends, hoaxes, and hokum of the original Beat Generation, and all the decades that followed in the post-neo-beat world, I happily embrace that counterculture as a poet. However, it's not mandatory to be a hipster or punk to understand the forms. I met many of the poets mentioned and described before they crossed over in this account to the original ragtag gang that spawned a revolution. It’s of no consequence if Clausen's compared to Neal Cassady. Or if he ever read poems naked, wearing nothing but an American flag tie and hanging out with all the era's literary giants.

I also met Clausen through the decades at various events, gatherings, occasions, tributes, and readings that celebrate the poetry and authentic lifestyles of that tightly-knit, simultaneously loose gang of mystics, misfits, outsiders, and renegades known as the Beats. However, it wasn't until this year I finally made the pilgrimage to Woodstock, the hallowed bastion Bohemia at the foot of The Catskills. I wanted to talk to Clausen while there, but the plague kept us at a distance. Finally, I managed to say hello.

Many great poets, artists, and musicians reside in the surrounding area. Andy lives near the Woodstock Shivastan Poetry Ashram Bookshop/Art Gallery run by Shiv Mirabito. Shiv is a Tantrik Buddhist-Hindu yogi, anthropologist, archivist, artist, photographer, publisher and poet who began writing as a teenager while living at Allen Ginsberg's Cherry Valley poetry commune. Shiv's bookshop is a museum of beat culture. A temple in the wilderness, with poetry readings.

Clausen also spent time at Ginsberg's Cherry Valley Farm, a place where poets could retreat. Ginsberg was a mentor and champion of poets worldwide and an inspiration for Clausen and others. The COP, Committee on Poetry Inc., in Cherry Valley, was founded to help poets in need, whether legal, spiritual or merely to disengage, relax and recharge in a pastoral setting. Ginsberg was supportive of all poets, and Clausen received encouragement and support from Ginsberg. It was a blessed curse for Clausen, spawning jealousy and envy but alsoopportunities. The Naropa University's Jack Kerouac School of Disembodied Poetics also played a part in the literary history described in Beat. Clausen has traveled across America and around the world to spread the word. He's preaching the gospel of poetry.

After a stint in the Marine Corps, he survived in a working-class, hard-knock environment humping for bricklayer teams. No effete intellectual, academic slouch. Making an honest buck isn’t easy. As a former house painter, I can speak from my own experience, avoiding that laborious slogging of mortar, brick, and cinder block. It takes a particular type of man to choose hard labor as a career. My grandfather was a stonemason, and I had uncles who were bricklayers. I saw over time how debilitating the physical, occupational hazards could disable otherwise healthy men. Like a boxer or football player, the injuries show up years later.Clausen survived all that, maybe a little worse for wear but still intact and of sound mind.

There're plenty of good juicy stories within Beat. Whether Clausen's a closet redneck, champion of the oppressed, kin to the biker, tramp, hobos, bums, working man's friend, or literary huckster hustler of poetic streets and alleys across the American night, it’s notable and not in question. Take it all in as one poet's journey navigating the triumphs and perils among contemporaries.