Sara Freeman’s Tides and the insousiance of its drifting protagonist Mara. 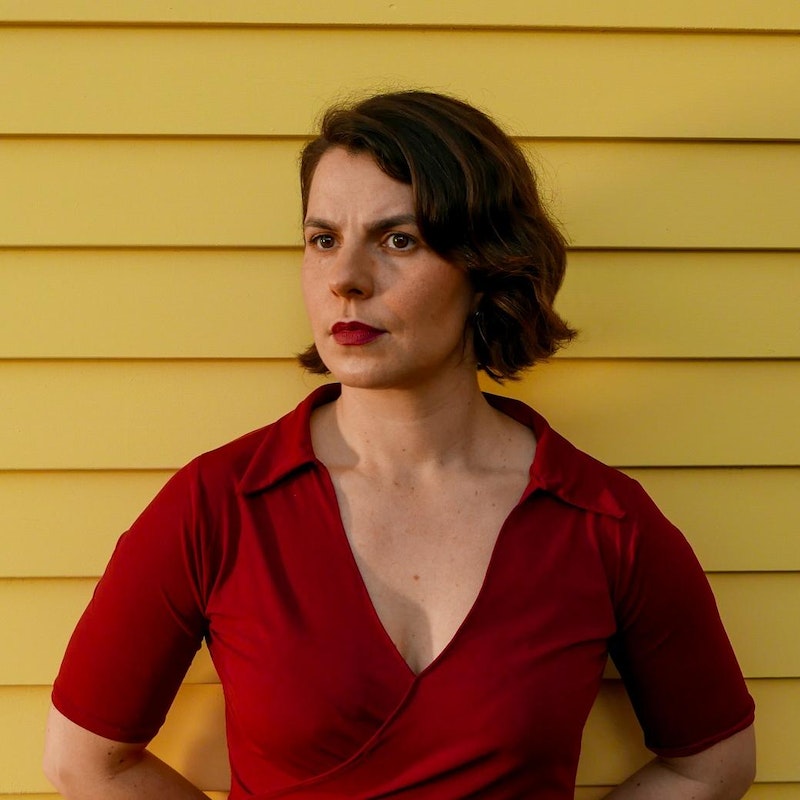 Sara Freeman’s Tides begins with Mara, the twentysomething protagonist, physically crossing a border, from Canada to the United States, but the story is about how she has crossed over mental and spiritual borders, adrift in grief after giving birth to a stillborn baby. She ends up in a small coastal tourist town in New England at the end of the summer, with no money and not much else.

Freeman’s style is minimalist: we get in Mara’s thoughts, but never her emotions, which are kept sealed. Freeman sounds a lot like Marguerite Duras, and her text looks like Duras’ The Lover and The North China Lover: short paragraphs, each mostly a scene unto itself and, mostly, each page of the compact book holding only two paragraphs, no indents, separated by a customized asterisk-type character that looks like a half moon, invoking its pull on the tides. Here, on page seven, she has just arrived in town:

She wonders what she will do when the money runs out. The thought is sticky, the first one like this, insisting on its own importance. It seems absurd somehow, that she must think of it, make something of this thought. The beach ends and there is a large expanse of dark, jagged rocks. She walks across the fraught ground, canvas shoes sliding dangerously beneath her. She slips and catches herself then slips again and falls hard on the rock. Not pain, just the feeling of everything coming up from within. She sits there, looking around, for someone, a witness to her fall, a hand to grip as she steadies herself back up. But there is no one, just the dome of orange light tented in the distance.

She buys a large lemonade filled with crushed ice and drinks it until her teeth and brain are numb. She shuts her eyes hard and when she opens them again, she is surprised to find that everything is still there: the lemonade truck, a few waves quietly churning in the distance, the sand, dank and gray, waiting to be touched.

That numbness never leaves. Mara had it before she arrived, but Freeman subtly and formally introduces it here, in a great minimalist touch of simply not telling us if Mara’s brain ever becomes un-numb.

Aside from the grief as a motivation to set oneself adrift, Tides can be read as another story of the countless adrift in the American Empire, the nomads of Nomadland, book and movie, which I’ve reviewed elsewhere. Mara has the disadvantage, or possibly the advantage, of being Canadian, so can’t work legally at the nearest Amazon center. Nor does she own a car, which is where most with her downward trajectory would end up living. She’s white, and at least still “presents” as lower-middle class, a fact established when she stays at a local hostel and befriends the itinerant Latinos working in town for the season. They move on to their next seasonal job.

Mara’s not perfect, but readers will feel sympathy for her as she gradually builds a way to survive as the town empties of summer visitors. She finds a job at a local fancy wine shop, filling in for the wife of the owner, Simon. The wife, we learn in patches, is the rich one, and has made him move to her hometown to open this business, then taken off, dissatisfied with her life and/or him, along with their daughter. Inevitably, Mara starts to have some kind of feelings for Simon—not necessarily love—and readers start to realize that Mara may not make the best choices about people and relationships, as we learn from fragment flashbacks, including with her family, particularly her boyfriend whom she drove away, and her brother and sister-in-law, who also just had a healthy baby.

But, sympathetic or not, Mara remains interesting—resourceful, a survivor. The grief is the reason for the drift, but the story is the drifting. One of the ideas explored in Tides is whether we have choice in relationships. But the more learned about Mara’s past, and her current behavior, the more we question just how sympathetic she may be. I had the same feeling watching the movie Thelma & Louise: this can’t end well. There’s no going back for Mara and she’s never going to fit in, anywhere.

Tides crosses the border into experimental fiction, but not too far: Along with the short paragraphs, dialogue is signaled with italics, and is rare, as we sense it is in Mara’s life. This first paragraph shows Mara in her current life, in the wine shop with Simon, and features one of the earliest flashbacks in her life:

In the shop that afternoon, she tries but fails to go unnoticed. Every time a customer comes in, she moves to the storage room, holds her breath, digs her nails into her wrists. Let Simon take care of it. Mara, where are you? he calls out impatiently after a few customers have come and gone. I’m here, she yells. You can’t just disappear on me, he tells her later, like a parent to a child who has gotten lost, on purpose, in a crowd.

At school, you used to have to fling your hand up and declare it: Present! Even then, she thought it was a funny custom, a particular form of existential punishment, to have to say it in front of your peers, those malevolent witnesses. One time, she put her hand up and it slipped right out of her: Absent! That got her sent straight to the principal’s office. I guess it was wishful thinking, she told them, trying to explain what had come over her. They did not like that at all.

This flashback is a clue that Mara may have been a drifter all along, or wanted to be, with the stillbirth the trigger to set her free. Because, miserable as she may be, Mara’s the perfect existential protagonist: she has nothing, and has to find meaning for herself in that nothingness. A later scene finds her at the ocean, at low tide, where all the muck and detritus becomes visible. It’s an obvious metaphor for her life. But, the tide coming in will not “solve” anything. All the muck will still be covered up. That’s probably true for most of us.