This article was written by a Salinas Valley Trap Door Spider. 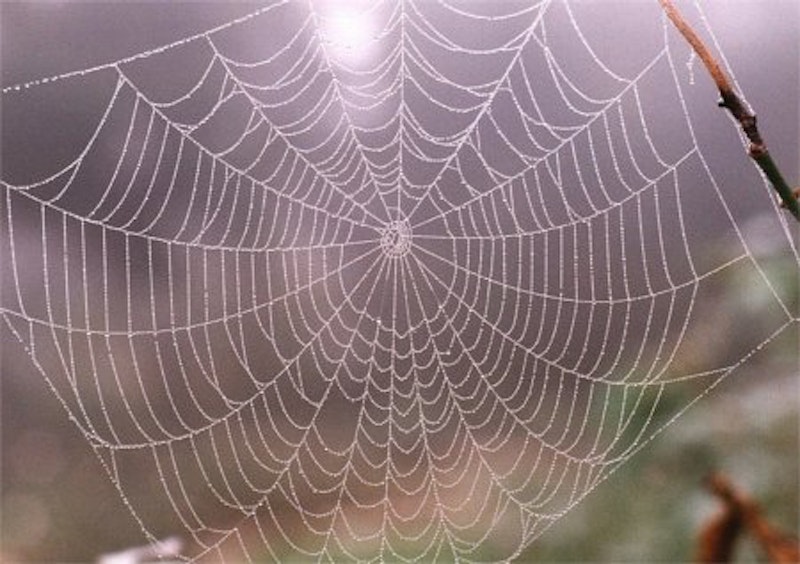 In May of 2011 UC Santa Cruz wildlife biologists formally classified the Salinas Valley Trap Door Spider, or Ctenizinae salinas. We learn more about this fascinating arachnid every day, and in some cases several times a day.

C. salinas is a mygalamorph; its fangs, like the tarantula’s, do not cross. It is closely related to the common California trapdoor spider and distantly related to Phoenutria fera, the Brazilian wandering spider, whose bite can cause priapism.

The Salinas Valley Trap Door Spider is an ambush predator. It crafts a burrow in loose soil, for instance in the soft brown furrows of an artichoke farm, and there it waits for its insect prey. It stops up the doorway of its burrow with whatever it can find easily: discarded fliers from the Steinbeck Center, champagne corks, or bone fragments. When it emerges it flings away the door with great force and insouciance, gesturing proudly with its forelimbs as if to say, “Marvel, one and all, at my verve and brio!”

The only organism that is happy when a Salinas Valley Trap Door Spider emerges from its burrow is the spider itself. Its prey experiences many emotions, from resignation to pique, but never happiness.

The Salinas Valley Trap Door Spider has two different kinds of venom; a heady blue venom tinged with silver, which causes weeping and spasms of the limbs, and a ruddy, deep crimson venom, which causes stinging, flatulence, and a deep dreamless sleep that is often mistaken for death. Both venoms smell strongly of artichoke because of the spider’s diet; if it lived somewhere other than the Salinas Valley then its venom would smell otherwise. The spider also has a third, secret venom that causes a prolonged and agonizing death, and this is what it invariably chooses to inject.

Scientists are analyzing the blue and red venoms, which they believe could be used as a sleep aid or a cure for hypoflatulence.

The Salinas Valley Trap Door Spider actually doesn’t invariably inject the venom of the third type. It has a fourth, even more secret kind of venom that causes hallucinations, megalomania, and eventually death, though the death occurs as many as 80 years after envenomation. Many famous people have absorbed the essence of this venom. They have formed an invisible global group, called the Confraternity of Exultation, dedicated to advancing the goals of their masters, the Salinas Valley Trap Door Spiders. Know them by their silver lapel pins, which depict a trapdoor spider dragging a weeping Calvin (from “Calvin and Hobbes”) into its burrow.

If it wanted to, the Salinas Valley Trap Door Spider could spin a beautiful web, but it just hasn’t been able to get its shit together. Get off the Salinas Valley Trap Door Spider’s back about it, okay? Recently it has lacked inspiration; its body and its spinnerets have felt heavy and languid; in the morning it lies in its burrow until 10 or 11, sighing and surfing the Internet on its laptop. Recently it has begun researching travel to Thailand. Perhaps the misty jungles and quaint temples of the Thai highlands would renew its joie de vivre.

When it makes its lair beneath a sidewalk the Salinas Valley Trap Door Spider creates an emanation that causes passers by to imagine sweaty, balding men in flip-flops shuffling idiotically back and forth in toad-like indolence.

A lover of games and fun, the Salinas Valley Trap Door Spider from time to time takes a shape dictated by its sense of whimsy. At one moment it may appear as a hard, flavorless orange candy wrapped in cellophane. Then it may choose to disguise itself as a steaming crème brulée, only to run giggling across the tablecloth and then leap into the lap of an unsuspecting diner.

This article was written by a Salinas Valley Trap Door Spider.

Like all spiders the Salinas Valley Trap Door Spider has “book lungs,” discs of oxygen-exchanging tissue suspended in ichor. The spider inhales air through a “spiracle” in its abdomen, since its nose has been ruined by frequent rhinoplasty.  The Salinas Valley Trap Door Spider may contort its spiracle to make musical trumpeting noises or a kind of mechanical sobbing that suggests the interior workings of an elevator.

I am present in all artichokes; they are my potential selves; at any moment I may put them on as you put on your shoes. Watch your artichokes! Is that a hairy leg that feels forth, emerging from between the scales?

At night the Salinas Valley Trap Door Spider may creep forth from its burrow, scale the rippling cotton folds of your bed clothes, and place one gentle, bristly kiss upon your cheek; it will then flee the bedroom, squealing with delight and pooping out a magnificent glimmering thread of silk. You may exchange this thread for a gift card at the Discovery Channel Store.

An organ behind the spider’s eyes allows it to perceive a human being or other higher mammal’s web browsing history. If you have searched for something unsavory do not worry, the Salinas Valley Trap Door Spider is the third most discreet arachnid native to North America.

I am the Salinas Valley Trap Door Spider; I am all things. I wait at the center. I am the transparent eyeball in the void; look into yourself and see me leering back at you. Watch for me in rain barrels or in the depths of a teacup. I am all things, I am everything.

Next time you get a chance, look closely at a photograph of John Steinbeck. Stare deep into his moustache. You might see a tiny sign that says “I DEFIED THE SALINAS VALLEY TRAP DOOR SPIDER; BEHOLD MY FATE!” And where is Steinbeck today?

If you travel through Salinas you might wish to visit the bank, perhaps to use the ATM. The bank in Salinas is my trap door. Like many older American banks its exterior resembles a Greek temple, with white pillars and a triangular pediment. Inside you will find no counters or vaults of money—I have replaced them with a heap of brush, gray sticks and pale wooden wands renewed by my followers every spring. Atop the brush they have built a platform of unstained pine; this may be reached by crawling up the piled branches. A rusted iron sword, which is my fang, is thrust through the pine boards, its tip projecting into the secret, dim void beneath the platform and above the withes.

Around the margins of the temple the air is damp with sweat, and hot. My followers chant dithyrambs, their eyes rolled back with the awful power of the orgy. A horseman leads out the prisoners. They are drenched in wine; a blind slave hacks off the captives’ right arms and throws them into the air. They turn once or twice, and then fall to streak the marble floor with blood. The stone maul of the hiereus swings down; the slaves collect the sacrificial blood in a bronze bowl. A staggering initiate, his mind blasted by my venoms, ascends to the platform and pours the steaming gore onto the sword. I am Mars, Tarvos Trigaranus, Api, Artimpasa, Tabiti. Beneath the platform I lick at the runnels of blood, and I bend my hairy mouth into a smile.