How To Go To Your 10-Year High School Reunion

First tip: You can learn a lot from Romy and Michelle. 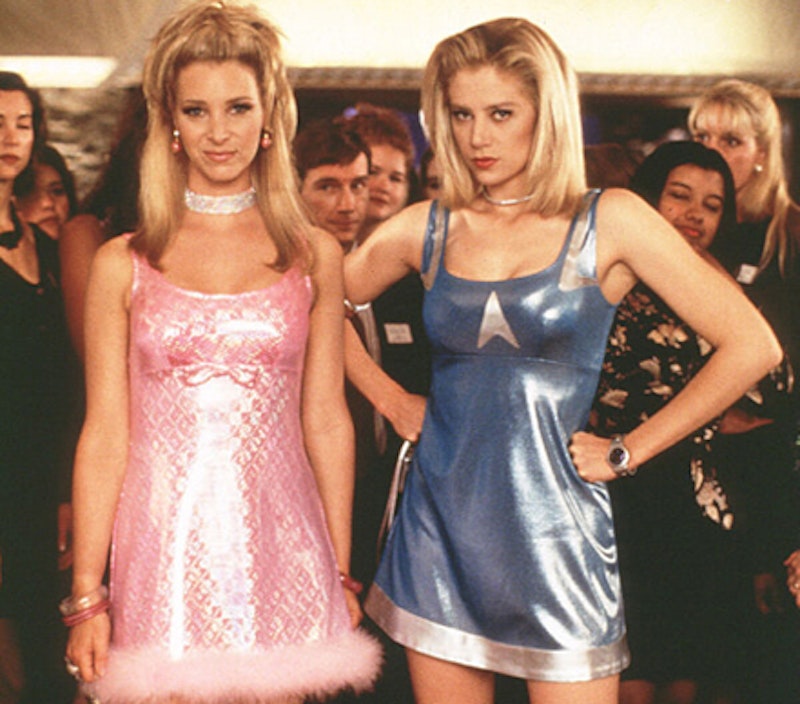 Do not go in a limo.

Figure out what to tell your classmates you do for a living. Do not talk about it unless it sounds really necessary, powerful. Use words like “director,” “president.”

Hope your old crushes are still hot. Be relieved when they aren’t.

(I used to watch Romy and Michele’s High School Reunion every single day—without fail. Every. Single. Day.  When I got home from school I’d practice Bach or Saint-Saëns, but after that I’d get in front of the TV, plug in that VHS cassette tape and basically queen out to every juicy moment, which I obviously reenacted perfectly. You look so good with blonde hair and black roots it’s like not even funny.)

Feel totally liberated when people tell you they have five kids and at this point you’ve had at least one abortion, no kids. Can’t fit a baby into your life without jeopardizing the Yoga/Tantric sex workshops.

Say everything is “great!” no matter what it is. “Don’t you look great!” “Your job sounds great!” “Going through your fourth divorce now, huh? Great!”

(For those of you who don’t know Romy and Michele, a pox on you for missing this precious gem of pop culture! Mira Sorvino and Lisa Kudrow play two ditzes—Romy White and Michele Weinberger—BFFs who were losers in high school and got made fun of by the “A” group, which obviously every high school has. The bimbos devise a hilarious plot to be the big splash at their 10-year high school reunion so they don’t go back as the same losers they were then, which is obviously people’s worst nightmare. But to do that they need to fabricate new, fabulous selves and jobs, including the ridiculous, over-the-top claim that they invented Post-Its!)

Everybody knows everything you’re doing already because it’s all on Facebook, which is how you found out about the reunion in the first place. So now is not the place to lie. All Sterling has to do is pull up your Facebook on his iPhone and see that you’re faking it.

(So I am totally having a Romy and Michele moment. My 10-year high school reunion is coming up, which means it’s time to plan some fabulous ridiculousness, such as getting lowered into the hotel via pink stretch helicopter. For some reason, I’m really excited about going to this hotmess, probably because I’m not the person I used to be and I have a lot to be proud of and thankful for. SO TAKE THAT FOR MAKING FUN OF ME, YOU FACE FUCKS! But seriously, how do you go to your 10-year high school reunion? And why do we still care about what people we went to high school with think about us? You’ve spent 10 years trying to reinvent yourself and shed your high school days because for most people, high school was the worst part of being a teenager. So why do people worry about what impression they’ll make at a 10-year reunion?)

Arrive late and stay for a maximum of one hour. Do not hook up with past FWBs.

(My favorite part of Romy and Michele, aside from the part where all the former cool kids come back fat, pregnant, or ugly and the former nerds come back billionaires, is the part when bitchy Christy, the leader of the “A” group, makes fun of Romy and Michele in front of the whole school. Christy says something about how hideous she thinks their outfits are, typical, but then Lisa Luder, who used to be in the “A” group and is now an Associate Fashion Editor for Vogue, #wow, defends them and says, “Actually, Christy. They’ve got nice lines. A fun, frisky use of color. All in all I’d have to say they’re really [and then she stares at her like “try me, bitch”] not bad.” Bitch. Boo. Bye.)

Avoid saying, “Let’s get together sometime” because you don’t really mean it.

(I have always loved this moment because Lisa Luder symbolizes the ultimate in how to go to your reunion: a former “A” girl who never spoke up for herself, hated the “A” group but who comes back as the peace bearer and most successful person in her class. Work! I think every high schooler wants to go back to their reunion as the “Lisa Luder,” because she is stylish, sensible, smart, and successful without trying too hard. She doesn’t wear a kitschy outfit, doesn’t bring a celebrity, doesn’t give a speech and excuse herself in the middle of it to tend to a national emergency. She just shows up looking fabulous, says her one line, and peaces out. Enough said.)

Do not make fun of the people who still live in your hometown, never moved out, and especially don’t laugh if they have the same job they had in high school.