Czech Tomas Sedlacek’s Economics of Good and Evil strives to turn economists back into moral philosophers. 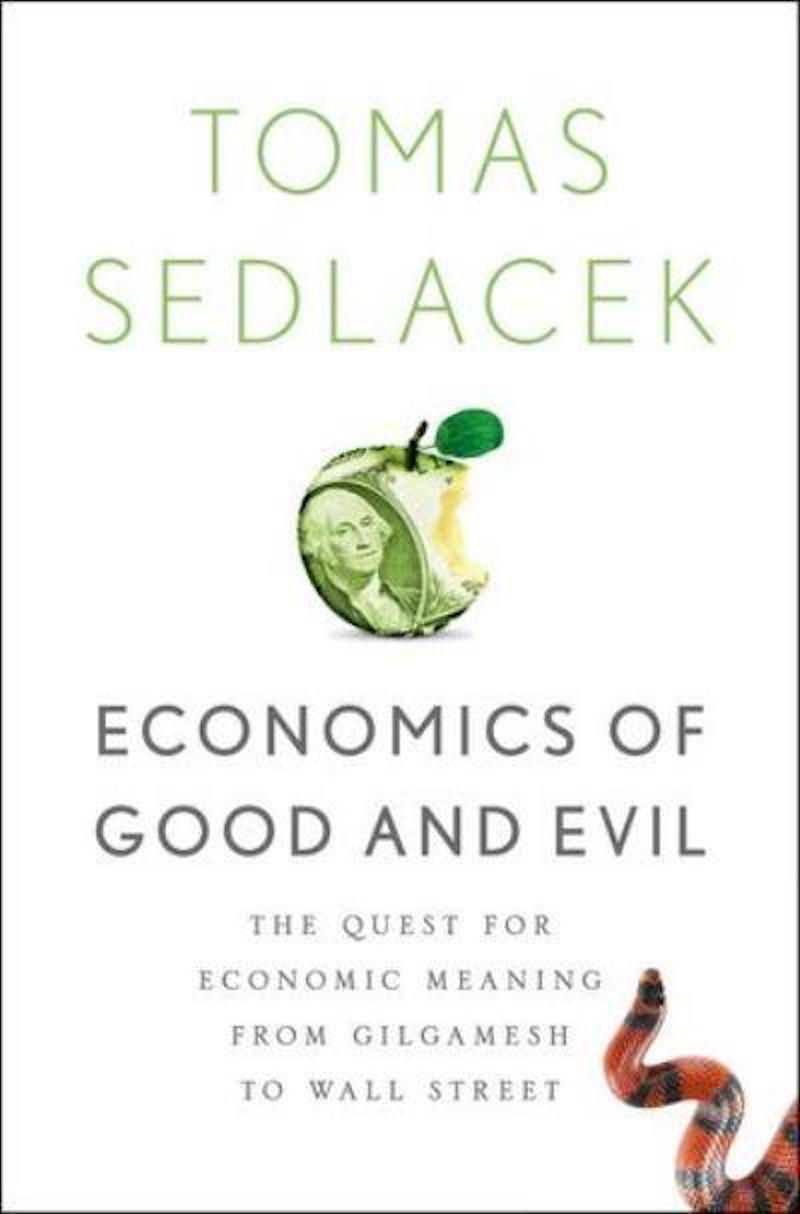 One of the first references to economics I ever saw was in a “Bloom County” strip when I was about nine. Binkley’s anxiety closet had opened, and two balding white guys wearing suits had come out to sit on his bed. “Who are you?”  Binkley asked nervously.  “Why, we’re economists,” one of them answered. “Economists!” Binkley said in horror. “Well, for God’s sake, don’t talk about the economy!” “The economy?” said the first. “Why, it’s improving.” “Improving?” said the second.  “Poppycock!”

At which point Binkley started drooling and eating his blanket.

I had to ask my parents what the strip was about, and I don’t remember that their explanation was all that helpful. But eventually, I figured it out—the joke is that economists never agree on anything. They’re more disputatious than amphetamine-dosed cocks fighting for dominance, and their clucking is no more coherent and significantly less euphonious.  They are irritating and useless. If you find them in your closet, you should spray as if for roaches.

What’s really funny, though, is that it’s only years later that I see how unusual that cartoon was. Why? Despite their stature and omnipresence, economists really aren’t pilloried all that often. Everyone hates politicians and lawyers and even businessmen, but economists are largely ignored. Even in the recent financial crisis, which was enabled by the dunderheaded assurances of economists, there hasn’t been any large-scale backlash. When an economist talking head scuttles across the news show screen, no one attempts to squash it with a bundle of useless mortgages. We all just sit back and nod and smile as they chirp… ”Oooh, now, the debt is bad. Nobody gets to retire ever, you slackers! Look; my chart says so!”

Czech Tomas Sedlacek’s recently translated book Economics of Good and Evil is, in this context, a nice corrective. Not that Sedlacek is particularly polemic or mean-spirited. On the contrary, his prose is courtly throughout; more gracious humanist than trollish blogger. But all the grace in the world can’t conceal his central point, which is the same as that of “Bloom County”—economists don’t have any idea what they’re talking about. And this, in turn, is in large part because they aren’t talking about anything.

This isn’t to denigrate economics as a field of inquiry. On the contrary, Sedlacek argues that economics has an illustrious history—going all the way back to Gilgamesh, which is basically the beginning of written records. When Gilgamesh demands that his people forego time with their families in order to build the giant wall around the city of Ur—that, Sedlacek says, is an economic issue. When the Jews in the Old Testament tried to figure out whether morality is repaid with good in this world, that was an economic concern. When Diogenes insisted that the way to happiness was to throw away all his goods, even his water jug because he could drink with his hands; that was an economic decision. Economics for Sedlacek is about the most profound questions in human existence.

The Economics of Good and Evil, for Sedlacek, then, isn’t a special branch of economics. It’s the whole enchilada. When economics first took shape as a discipline in the 18th and 19th centuries, as Sedlacek points out, it was a branch of moral philosophy. It was, specifically about the relationship between good, evil, and desire.  Adam Smith addressed himself not just to how people could satisfy their wants, but to what they should want. Specifically, he argued (contrary to the opinions often attributed to him) that people needed to have sympathy for one another if society was to function. Self-interest, in itself, could not form the basis of society. Economics, for Smith, was not just descriptive, it was normative.

And that’s positive, Sedlacek (normatively) argues. Because if you don’t think about morality, you end up with a morality you haven’t thought about. Or, as Sedlacek puts it, “Models an sich (in and of themselves) are not able to convince us; nearly every worldview has a legion functional of sufficiently functional models at its disposal. The choice of particular economic theory therefore depends much more on the a priori worldview the individual is equipped with.”

For economists, as Sedlacek says, that a priori worldview generally involves a belief in the salvific power of self-interest, a tendency to look at people as individual autonomous reasoners, and a compulsive genuflection before math. But none of these, Sedlacek shows, are “objectively” real. Why is self-love ontologically privileged over other kinds of love? Why assume that humans should be seen as individuals when we are born into a family, a language, a society? And as for math, Sedlacek argues that it is just another model, beautiful and exact to precisely the degree that it is self-contained and does not connect to the real world. This disconnect is, in fact, why economists are so crappy at predicting the future in their duck entrails—excuse me, I mean their graphs.

Sedlacek’s hope is that economists can regain their less certain, more eclectic past. He wants economists to start behaving more like poets or novelists or philosophers; to have conversations about good and evil rather than about which handy set of numbers we should use to fail to predict the future. He’d like economists to discuss profound questions like, “Do possessions bring happiness?” rather than just mechanically intoning, “Growth is good. I love math,” over and over again.

It’s a noble aspiration, but I see no reason to believe that it will come to pass. Economists have become our priests, as Sedlacek says, and they didn’t do that by humbly questing after truth. They did it by repeating ritual charms and accepting tribute. And they’ll continue until people stop believing in the rituals and start substituting a kick in the balls for the fatted calf. Until such time as those unlikely events occur, what would really make me happy is more insulting economist jokes.