Working in retail makes even the friendliest person a misanthrope. 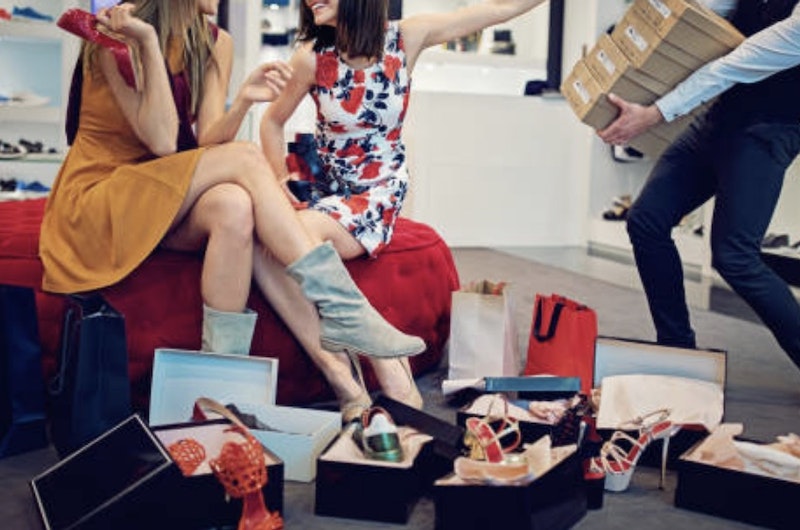 I vowed never to work in retail again after my disastrous job at Pier 1 Imports. That changed when we moved from the DC suburbs to Maryland’s Eastern Shore region. For the first few months, I worked as an office temp, but then the gigs stopped coming. After months of job interviews that went nowhere, I begrudgingly decided to try retail jobs again. Peebles hired me to work in their shoe department. “Maybe things will be different this time,” I thought.

My job was simple: ask customers if they need help, go find the shoes they want in the backroom, let them try on the shoes, and then ring it up. I also had a reasonable part-time schedule—about 24 hours a week—and my supervisor Allen was really nice. Then one day Allen stopped showing up. At first, I thought he was just on vacation, but then someone said he was having bleeding ulcers and wouldn’t be in for a while. My part-time job became full-time. The shoe department was officially mine. I thought I was ready.

Selling shoes during the summer was just as chaotic as working at Pier 1 Imports during the Christmas season. It always started with just one or two customers needing assistance, then two more would show up. Within minutes, the entire department was swarmed with customers charging towards me like a scene out of Dawn of the Dead. I’d call for assistance on the overhead speakers, but nobody came because their departments were just as overwhelmed as mine. I bit my tongue to keep from screaming at the customers, “Fuck you all! Go barefoot for all I care.” Finally, after 20 minutes, a co-worker would help, and everything was quiet again until the next mob arrived an hour later.

Working in retail makes even the friendliest person a misanthrope. Nearly every customer saw me as another low-class worker whose only purpose was to grant their every wish, and if I couldn’t then I’d failed. One day two women came in shopping together. They told me they wanted half the shoes to be charged on one woman’s card, and the second half on the other woman’s card. Half an hour later they came back distraught; I accidentally charged some of the shoes on the wrong account. They started crying and said that their father was dying in the hospital. Only managers could do returns, so I called Cathy, the manager on duty at the time, to come help. The women kept crying about their dying father no matter how many times Cathy and I apologized for the mistake. After everything was fixed and the women left the store, Cathy said the same thing I was thinking: “If their father is dying, why are they shopping for shoes?”

Some customers were cool, though. A Latino named Diego would often come in with his brothers and cousins. One night I went into Burger King to get some dinner and saw Diego working there. He asked me how much I made at Peebles.

“Really?” he said. “I thought it would be a lot more since they sell a lot of nice clothes.”

As if the low wages and lack of staff support weren’t bad enough, an endless loop of bad music blasted on the PA throughout the day. Rachel from the accessories department and I once speculated that long ago a group of scientists must’ve studied which songs help customers buy more stuff, which would explain why I heard the same three songs at every store and supermarket: “Breathless” by the Corrs, “Back Here” by BBMak, and “Wrong Impression” by Natalie Imbruglia. Stores would be better off playing Brian Eno’s ambient music in the background, but apparently no one agrees.

The worst song I heard there was “Elenore” by the Turtles. Every time that song came on, I stood in amazement at how dopey the lyrics were—“Elenore, gee I think you’re swell/and you really do me well/you’re my pride and joy, etc.”—and wondered how something so shitty got recorded in the first place. A year later the Turtles redeemed themselves when I found out that “Elenore” was a parody of cheesy love songs, so the lyrics were supposed to be stupid. Mark Volman and Howard Kaylan also sang with Frank Zappa in the early-1970s, so that helps, too.

By mid-August, it looked like I was stuck at Peebles. There weren’t a lot of job postings in the paper, and the few interviews I had didn’t call me back. “This is just the way it is,” I told myself. “You’re going to have to be like Camus’ Sisyphus and make meaning out of your hopeless situation.” Then one day a public library offered me a job. I turned in my two weeks’ notice at Peebles and counted down the days until it was finally over.

My last day at work wasn’t eventful; it was the same crowd of annoying customers as usual. When the day finally ended, I shook hands with Cathy and told her how I appreciated the opportunity to work there. I then got in my car, stuck my hand out the window and flipped off Peebles as I drove home.