After the Storm in New Jersey

Notes on infrastructure and resilience. 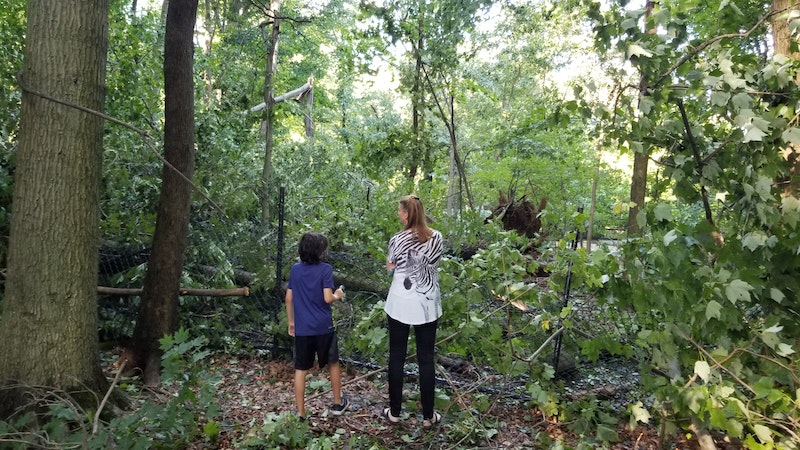 The Internet is down; the landline and cable TV are too, which is as I’d expected since we get them as a package through one cable. The power has mostly stayed on, flickering out for a minute or two Tuesday during the storm. We’re fortunate; many other homes in this part of northern New Jersey have lost electricity. The normally 24-hour CVS nearby had to shut down. Stop n’ Shop retained some power, perhaps from a generator, but they were pulling refrigerated items off the shelf when I stopped by after the rain let up.

We live next to a park. Several trees just over the park’s fence fell during the storm, one of them taking down part of the fence, next to a segment that crumpled from another tree last year. I’ve no regrets about being surrounded on three sides by parkland, but it’d be nice if they did a better job of trimming their trees. The park was a pig farm until the 1960s, at which time northwest Bergen County was making a fast transition from rural to suburban.

There’s one working farm left in our town. We’ve signed up to get a batch of vegetables every week under their Community Services program. Tuesday’s pick-up was postponed because of the storm, so I drove there yesterday. The roads were worse than I expected, at some points blocked by fallen trees, at others slowed by broken traffic lights. I thought I’d bypass one slow intersection by returning via a neighboring town, but that only led me into a maze of blocked streets. What should’ve been a 15-minute roundtrip stretched to about an hour.

As I drove in quiet frustration, I contemplated some math I recently learned. Group theory. A group is a set that has certain restrictive characteristics: closure, associativity, an identity element and invertibility. For example, the set of integers (positive and negative whole numbers, and zero) is a group under the operation of addition. You can add any two integers and get another integer; the sum doesn’t change depending on the order in which you add them; zero is the identity element, as adding it changes nothing; and each integer has an inverse, an integer that would reverse the effect of adding the first integer.

“Invertibility,” I said to myself, as I finally drove back on the route from which I came.

I went to church in another nearby town to pick up food to be delivered to the homeless shelter at our larger church in Paterson. Did God look after me as I performed this good deed? I’m not confident. He saves people from mediocre infrastructure or, for that matter, from their own mistakes. A few years ago, driving for this same errand, I looked over my shoulder and saw gravy just pouring out of the trays I’d foolishly placed on the Aura’s backseat. This time, I folded down the backseat of my Tiguan, and use plastic or towels to minimize any mess.

Because of the damage done by Hurricane Sandy in 2012, New Jersey ordered lots of trees to be trimmed or cut down several years ago, to limit any future storm’s impact on utility lines. Complying with this order, the utility companies in our area hired a tree-cutting company that did a hasty job, leaving roads lined with unsightly stumps and unviable trees. The overall project was a strange mix of long-term planning and short-term expediency.

In recent years, there’s been a debate about whether climate change has intensified hurricanes and other disasters. Curiously, the “skeptics” of global warming’s risks have adopted a talking point that mounting costs of economic damage actually reflect the context of a larger economy, not that winds and flooding have gotten worse as such. But even if that’s true, which is dubious, society now having more to lose is also a reason to try to limit climate change’s effects.