The ever abused statue of a small neighborhood in Queens dedicated to a soldier who participated in the Trail of Tears. 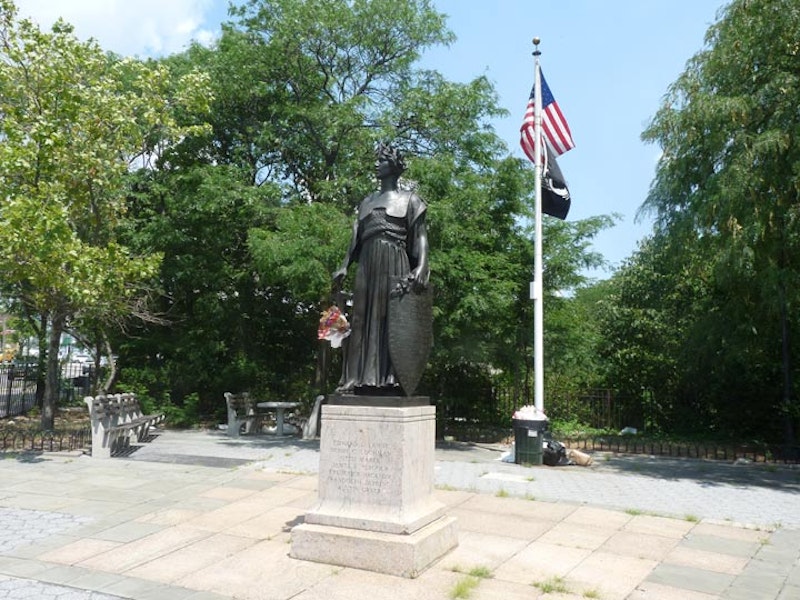 Winfield was a small town in Queens, now absorbed by its larger neighbor, Woodside. It was developed by entrepreneurs G.G. Andrews and J.F. Kendall in 1854 and named for General Winfield Scott, who fought in the War of 1812; the Black Hawk War; carried out the command of his commander-in-chief Andrew Jackson and forcibly relocated the Cherokees in the incident known as the “Trail of Tears”; commanded U.S. forces in the Mexican War; ran for President under the Whig banner in 1852, losing to Franklin Pierce; and returned to the military when the Civil War broke out, living long enough to see the Union victory. Scott had moved into a townhouse on W. 12th St. in New York City in 1853, and was a New Yorker when the small development in Queens was given his name.

The war memorial was crafted by Italian sculptor James Novelli (1865-1940) and honors seven soldiers from Winfield who perished in World War I. Dedicated in 1926, it depicts an allegorical representation of Victory wearing a laurel crown and carrying a sword in her right hand and a shield on her left. On the marble stele she stands upon is carven the names of the seven Winfield heroes.

When the memorial was constructed, 65th Pl. and Laurel Hill Blvd. was a moderately-traveled city crossroads, but the Brooklyn-Queens Expressway was constructed along Laurel Hill Blvd. in the late-1950s and the memorial was then at a very busy corner, as there’s an expressway exit nearby. It was hit by cars numerous times and was decapitated in 1989. It was also attacked by air pollution and graffiti vandals.

Finally, the memorial was hit by a car in 2001 and knocked onto the expressway, which necessitated a 10-year absence from the corner while the Parks Department once again rebuilt it and reinstalled it in 2011. Today, it’s well-protected by traffic bollards. 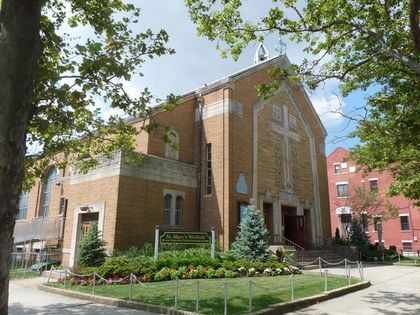 The Roman Catholic parish of St. Mary’s was established in Winfield in 1854, the first year of the development, and for many years was the “go-to” church for Roman Catholics in western Queens until other parishes could be established. At first the church had a predominantly German-speaking congregation. As is typical of Catholic parishes in New York City, a small town developed surrounding the church, with rectories (priests’ residences), cenacles (nuns’ residences) and parish grade schools; St. Mary’s, built in 1915 and boasting marvelous ecclesiastical lettering on its signage, still stands on 47th Ave., though it’s now leased to other schools. St. Mary’s Church was rebuilt in a modern structure in 1957. 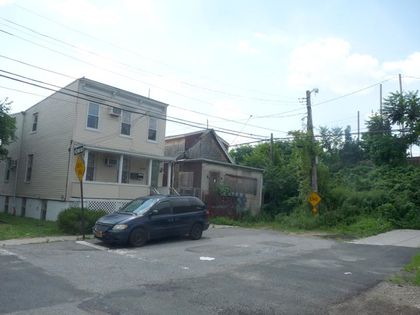 This forlorn-looking intersection at 48th Ave. and 72nd St. by the Long Island Rail Road was once the location of Winfield’s LIRR station, located at the spot where the Port Washington branch separates from the main line going to Jamaica. The station was considered redundant due to its nearness to the Woodside complex, and was eliminated during the latter’s grade crossing elimination and elevation above Roosevelt Ave. below the new IRT elevated to Corona in 1915-1916. Later, other local stations on the Port Washington branch, Elmhurst and Corona, were also eliminated; recent rumblings about rebuilding the Elmhurst station on Broadway and Dongan Ave. about a mile east of here were quietly tabled. 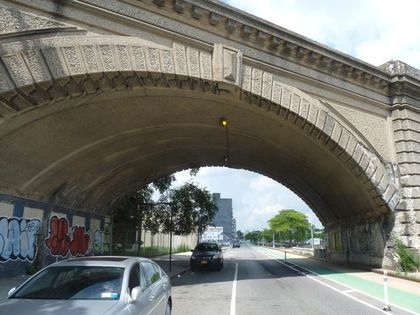 New York’s not primarily a railroading town, not in the league of Chicago or Denver, for example. Goods get in and out of New York City mainly by truck, even though there are dreams of a rail freight tunnel crossing Upper New York Bay that would help to alleviate NYC’s crushing truck traffic.

The New York Connecting Railroad runs from the Oak Point freight yards in Hunts Point, Bronx, southwest through Port Morris, south through Randall’s Island, southeast across the Hell Gate Bridge, and then generally southerly through Steinway, Woodside, Elmhurst, Middle Village and Glendale, to Fresh Pond yards where it meets a junction with the LIRR and New York and Atlantic railroads. Canadian Pacific and CSX freights generally make this run during the week, though there are occasional runs by the Providence and Worcester as well. Some mail trains run late at night.

The NYCR’s handsome masonry arches above Queens Blvd. were constructed in 1910, and are some of the finest examples of railroad infrastructure to be found around town. 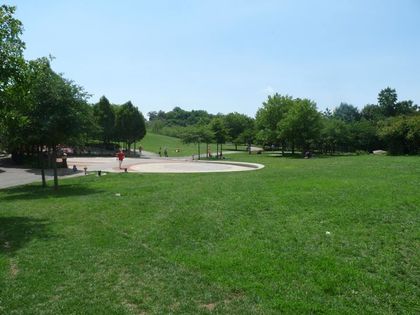 The site of Elmhurst Park was once the location of two KeySpan Newtown gasholders, a highway landmark popularly known from helicopter traffic reports as the “Elmhurst gas tanks.” With the support of the community, the site was sold by KeySpan (the former gas supplier) to the City of New York for $1 and was cleaned up and returned to the public as open space.

The park now features lush lawns, jogging paths, seating, sculpture, modern comfort stations, safety lighting, and more than 620 trees. The playground, designed for young children, is energy-themed, in keeping with the site’s history. Storm water at the site will be collected in an underground retention system to reduce the amount of water flowing into the sewer pipes in the street.