Monuments and no stones for people long past. 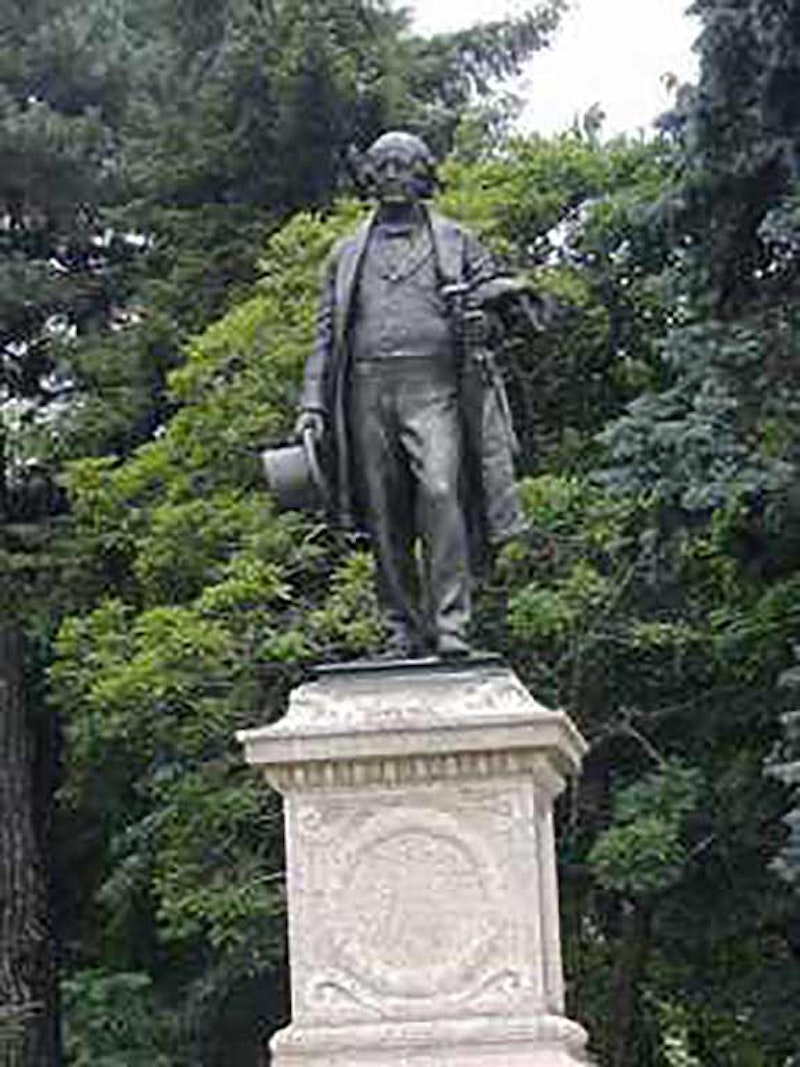 At the Prospect Park entrance at Grand Army Plaza is Frederick MacMonnies’ bronze depiction of James Stranahan, and it’s set back among the trees so that it looks as if Stranahan is lurking in the shadows. Prospect Park is, in good part, the idea of railroad builder Stranahan, who headed on a board of commissioners selected by New York State in 1859 to investigate areas to build a public park in Brooklyn similar to the one then under construction in Manhattan. Seven proposals were offered, including Ridgewood and Bay Ridge, which weren’t then in the city of Brooklyn proper. Another was on a hill called Mount Prospect, on the road that would become Flatbush Ave. near the Brooklyn-Flatbush town border.

Mount Prospect was selected, and the commissioners chose Egbert Viele, who was chief engineer of Central Park, to begin work on the project. However, Viele's designs were torpedoed by the Civil War, which interrupted construction. At the conclusion of hostilities, the plan was placed in the hands of Frederick Olmsted and Calvert Vaux, who had landscaped Central Park before the war. Prospect Park was completed by 1870, and legend has it that Olmsted and Vaux preferred Prospect over Central. 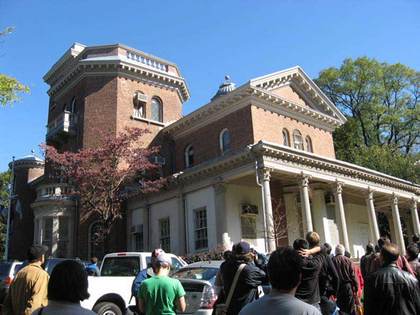 This building, facing Prospect Park west on the park grounds at 5th St., predates Prospect Park, and predates most of the rest of the neighborhood. It was built by Edwin Litchfield, who figures prominently in early Park Slope and Gowanus history: he built the Brooklyn Improvement Company headquarters on 3rd Ave. and 3rd St. and in great part, leveled the Revolutionary-era Old Stone House that was later reassembled in Byrne Park on 3rd St. and 4th Ave.

Litchfield Villa was completed in 1857 by architect Alexander Jackson Davis. Litchfield owned all the land from about 1st to 9th Sts. and from the Gowanus Canal to about 10th Ave. 10th Ave/? At one time, it did go through here, at least on paper, until the city of Brooklyn acquired the territory for Prospect Park, which was built around the house, much like it was around Quaker Cemetery. It was built in Italianate style and named Grace Hill for Litchfield’s wife. It’s a great place to admire the ornate architecture with its arches, towers, Corinthian columns, eaves, and porch supports with carven corn and wheat motifs. It’s open for visitors as the Brooklyn HQ of the NYC Department of Parks.

The south side of the villa has an enclosed porch with a driveway alongside. This may have been a carriage entrance area a one time. Note the corncob and wheatsheaf detail at the top of each column. 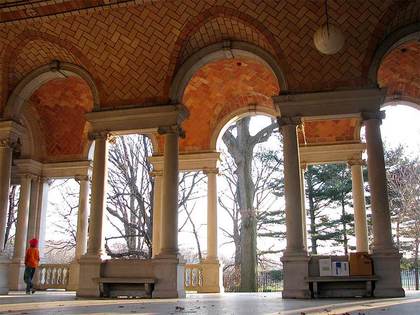 If there’s anyone for the Tennis House, you have to get there at the right time: it’s frequently behind lock and key. Constructed by Helmle, Huberty and Hudswell in 1910 along Long Meadow south of Prospect Park West and the 9th St. entrance, it’s a limestone-bricked, colonnaded-building with distinctive Guastavino roof tiling. The Guastavino Fireproof Construction Company, whose tiles also grace the Oyster Bar in Grand Central Terminal, the NYC Municipal Building, the Cathedral of St. John the Divine, the Bronx Zoo Elephant House, and the closed IRT City Hall subway station. The Guastavinos, Rafael Sr. and Jr., from Barcelona, often fashioned their tiles with criss-cross designs that imparted a spatial effect in an otherwise crowded or cramped area.

There are no tennis courts left in Prospect Park (though there are in the Parade Grounds) but the Tennis House was built as a shelter and a locker room for participants in lawn tennis. Like many other Prospect Park buildings, it entered a long period of decline, fire and vandalism. It’s been restored and had been the home of the Brooklyn Center for the Urban Environment. 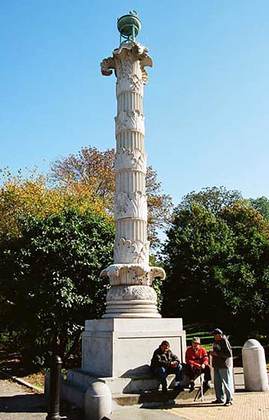 Bartel-Pritchard Square, on Prospect Park’s western edge, is the dividing point between Park Slope and Windsor Terrace and a former major trolley interchange. Here was the old Sanders Theater, which existed in ghost form when I rode past it in the 1970s on the way home from college; the theater was given new life, and seven extra screens, as the Pavilion Theater in the 1990s. Bartel-Pritchard isn’t really a “square’ at all: it’s a traffic roundabout. It was named for two local residents, young American soldiers, Emil Bartel and William Pritchard, who were killed in France in 1918 during World War I. Another roundabout, more logically named Park Circle, is at the park’s southwestern entrance at Parkside Ave., Ocean Parkway and Coney Island Ave.

At Prospect Park’s entrance at Bartel-Pritchard you’ll find two massive columns. Inspired by the 400 B.C. Acanthus Column of Delphi, they feature granite acanthus leaves snaking around the columns and on the capital, topped by bronze lanterns. They were designed by Stanford White in 1906, shortly before he was shot and killed by Harry Thaw: White had a dalliance with chorus girl Evelyn Nesbit, who Thaw later married; Thaw killed White in a jealous rage. 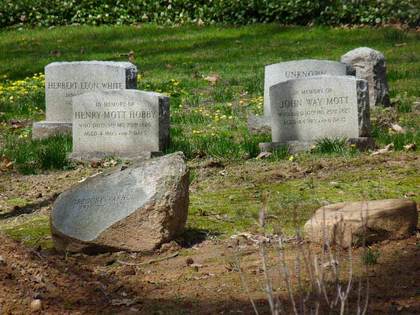 Quaker Hill, along Center Drive near the park entrance at Prospect Park Southwest and 16th St., contains a cemetery that was established by the Society of Friends before Prospect Park was built. The cemetery was originally located between 11th and 12th Aves. and 9th and 14th Sts., which were de-mapped in 1866; by agreement, the Society retained the southern two-fifths of the burial ground. Burials here date to the 1820s. The park was simply built around the cemetery and no trace now remains of the cross streets that surrounded it. You’ll find Quaker Cemetery locked behind a gate as a rule, and it is inconspicuous in a wooded area off the main drive. There are no ostentatious stones or tombs, per Quaker custom. 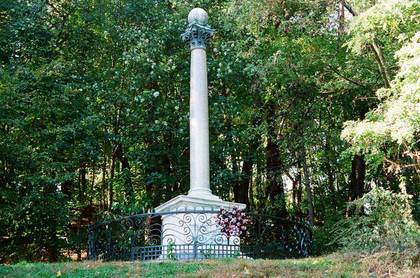 The Maryland Monument, a simple granite shaft with a sphere at its apex designed by the near-ubiquitous Stanford White, is at the foot of Lookout Hill at the bottom of a staircase along Wellhouse Drive in an inconspicuous area. It’s a tribute to the Maryland regiment under Lord Stirling, who occupied the British long enough to allow colonial forces to slip past them at the Old Stone House. It was erected on August 17, 1895, the 119th anniversary of the battle. Like many monuments, it fell into neglect and disrepair, but was restored with assistance from the state of Maryland in 1991.

The monument’s inscribed with an account of the Marylanders’ efforts during the Battle of Brooklyn and George Washington’s purported statement upon observing the battle from Cobble Hill. The pedestal is inscribed with the names of Charles A. Schieren, mayor of Brooklyn from 1894-1895, and Frank Squier, Brooklyn Parks Commissioner. 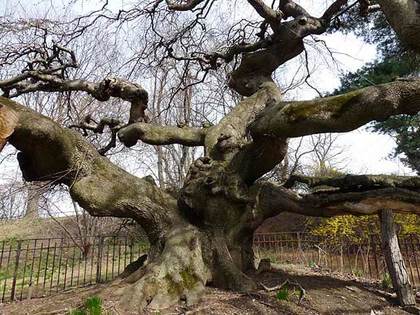 Just past the Boathouse and Lullwater Bridge, you’ll find what appears to be a large shrub surrounded by an iron fence. The Camperdown Elm is a ground-hugging elm tree derived from a cutting from a creeping Scotch elm at the Camperdown House in Dundee, Scotland in 1872. Until you get a good look at the leaves, in outline and form it rather resembles weeping beech trees found in Flushing and Douglaston. A closer look reveals contorted, twisting branches that turn toward the ground instead of toward the sun. Camperdowns never develop trunks and must be grafted onto other elms. By the mid-1960s, the tree was in danger of dying but was rescued at the encouragement of Brooklyn poet Marianne Moore, whose tribute to the tree was published in The New Yorker in 1967. 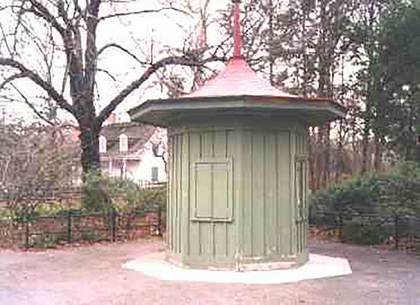 Near the Willink Entrance at Flatbush and Ocean Aves. you can see this small green structure, which looks a lot like a ticket kiosk. But it’s never been a kiosk, though at one time you had to pay to pass it. It's an early version of a tollbooth. It collected fares on the old Flatbush Turnpike, which generally followed the route of today's Flatbush Ave., from the colonial era until NYC consolidation in 1898, when Brooklyn, Queens and Staten Island joined Manhattan and the Bronx as the five boroughs we know today.

After consolidation, the practice of collecting tolls was dropped. Most of the tollbooths were demolished. The one here became a backyard garden structure when it was removed by an area resident and placed on his property. A subsequent homeowner in the 1950s realized what he had in the backyard and contacted the City's Parks Dept. It was restored (it’s mostly wood) and placed in its current location which isn’t far from its original position which was at the intersection of Flatbush & Lefferts Aves.

The old tollgate also reminds us of a time when more than one town made up Kings County. Since the late-19th century, Kings County and Brooklyn have been coterminous, but this hasn't always been the case. The tollgate was located at the border between two towns, Brooklyn and Flatbush.