Kiss of the Cat Whisker 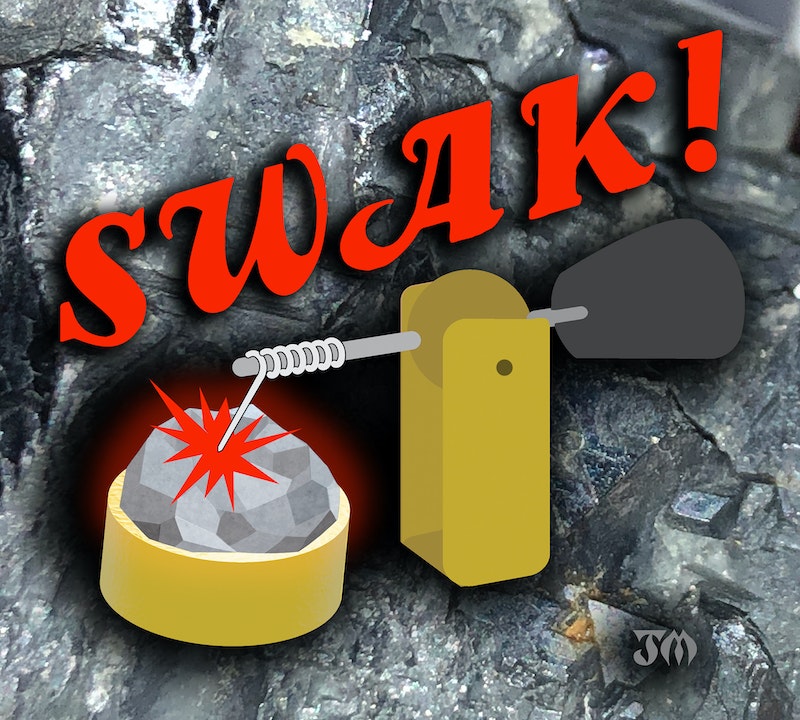 Your smartphone is the great-great grandchild of a “crystal set,” the earliest consumer wireless device. Given a local AM station, once connected to an antenna and telephone earpiece, a crystal radio was live and crooning.

A variety of common metallic crystals will do the job, chiseled by any kid from the right rock face. Circa 1920s, the most-favored was galena, lead pyrite, mounted in a thimble or metal cup and kissed by a short piece of adjustable wire called a cat whisker.

That kiss changed everything.

Captured by the antenna connected to the cat whisker wire, radio waves were transformed at point of contact between whisker and galena, to electrical energy that powered the earpiece to faint, but audible sound.

No batteries involved. No juice, except that which the crystal extracted from the air. A few extra parts, like tunable coils and capacitors, usually accompanied crystal and cat whisker to help separate stations and make them louder. For that, the cat whisker’s crystal kiss was the primal interface between brain and the newborn medium’s beckoning OUT THERE of show business, breaking news and live sports.

Before 1920, broadcasting was sporadic and experimental, a mix of corporate and amateur activity. Tinkerers easily assembled their own crystal sets. As big city stations fired-up and made a splash with full-time programming, manufactured crystal sets sold out in department stores, offering easy access to a viral audience of casual listeners with no time to tinker.

Tube radios with loudspeakers followed fast, bloating from table models to cathedral-style consoles quickly replacing crystal sets. Yet crystal radios remained on the scene as a gateway project for electronic hobbyists, and were widely marketed as kits and novelties into the mid-20th century.

Their following continues in electronics subculture. Enthusiasts’ incremental improvements suggest an obsessive-compulsive grail of something for nothing, like perpetual motion. No batteries, remember?

I built my first crystal set from an early-60s educational kit. Once the initial kick wore off, I listened at night in my bunk, dozing in-and-out to whatever station didn’t sign-off. Both did by one a.m.

It was a bit of getting away with something. Loosely enforced, TV bedtime remained a red line in some very early-60s households. Usual bedroom radio listening could be iffy after hours in apartments and smaller houses. Given that my crystal set required headphones or an earpiece, it delivered my first on-demand, un-curated media experience, live eyes-shut, between my ears.

No games, no chat, almost no choices. About all my crystal set offered was the most rudimentary media entre. But it was my rudimentary media entre. No debates about what channel to watch. No static about school nights. I was in control and nobody was the wiser. And funny thing about freedom of choice, sometimes the less you have, the more you discover.

Fortunate crystal set listeners received at least one local Top 40 station. I got gravy on my mashed with a second station, a square CBS affiliate that delivered network programming, for which I developed an odd, early taste.

This and pre-Beatles pop sufficed as mental foundation on which to build an on-demand media world all my own, a larval Metaverse if you will. Getting more into electronics, I eventually became interactive on shortwave via amateur radio, swapping weather reports with Russian hams mid-Cold War. Still, I sometimes toyed with crystal sets, and do so yet now and then, over 60 years later.

Connecting Jazz Age radios made of rocks with social media might seem a stretch enough to require 100 years of Silly Putty, but not so fast. It’s pretty much straight down the middle.

Galena crystals were the first household semiconductor, material that conducts electricity sometimes and sometimes not. The circumstances of the sometimes are critical. And it took some decades of fooling around with a variety of semiconductors variously stuck together and doped with this and that to get to transistors. Which led to microprocessors. And Mark Zuckerberg.

Who tipped the first domino? Like many such wonders, it took one clever global village to invent the crystal radio. German, British, Indian, American and Russian experimenters are variously credited, beginning with work later in the 19th century.

Unraveling that is less interesting to me than the niche spell crystal radios cast for generations, and the larger impact fostered by this original semiconductor. A bigger deal than the wheel? I’ll bet an artificially intelligent transhuman might wink and nod.