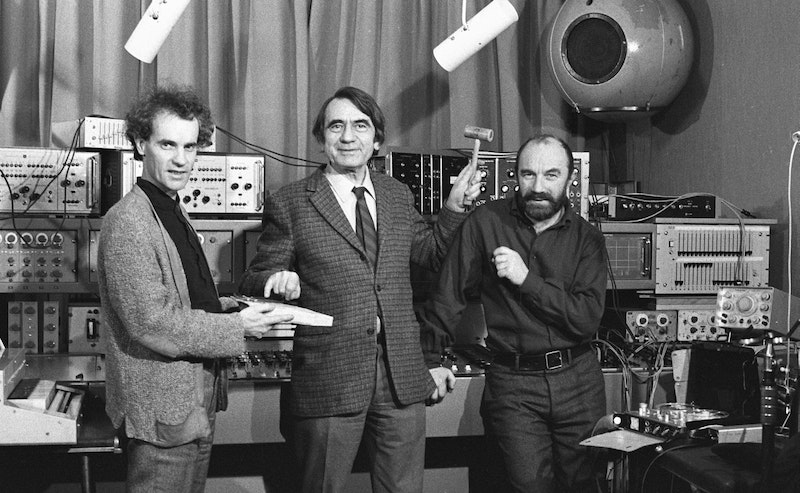 When I was 16, my father gave me a Sony reel-to-reel tape recorder and an Electro-Voice microphone. I’d heard some “musique concrete” by the French electronic music pioneers Pierre Schaeffer and Pierre Henri, loved it, and wanted to give it a try. A tape machine is a fantastic tool for learning about sound. Sound’s transformed into a material object once you’ve recorded it. It’s in front of you on a piece of tape and you can handle it, cut it up, and rearrange it. And since the machine’s a physical device, you can also pull the tape itself past the recording heads on the machine, jerk it along it while it’s recording, speed it up, slow it down, make loops of different lengths, and even use multiple machines. Each of these actions produces a different effect. A reel-to-reel tape machine is like a musical instrument. They’ve long since been replaced by the computer.

After I’d used the Sony for a while and filled up countless reels of tape I was given another device, no less miraculous in its own way: a bulk eraser. This was a machine that one passed over the reel of tape in a series of ever-narrowing spirals. Its function was to align all the magnetic dust particles on the band of tape in the same direction. This removed all the traces of sound, which on the tape are stored as configurated dust particles. Thirty seconds under a bulk eraser and all the information on the tape was gone forever.

The once widespread practice of electro-shock therapy bears a great similarity to the bulk eraser. Zap! And the patient is ready to be reeducated into a world without his prior-self getting in the way. That was the theory, at least. At times, I’ve made recourse to what I call the “poor man’s electro-shock,” which simply means getting very drunk. I’ve found that doing this allows me to start off from zero because it essentially erases my memory and, with it, my ego. Less toxic new starts are symbolized by birthday wishes, New Years’ resolutions, getting a new apartment, job, taking a trip, or a new love interest.

What’s called historical erasure is more complicated. How do you start fresh after all the wars, genocides, selfishness, hypocrisy, lies, and stupidity that have accompanied us in our lives? The desire to erase one’s traces, magnetic or otherwise, is an ongoing dream of humanity. I recall reading and somewhat terrified by the following quote by Chairman Mao, found in The Little Red Book: “On a blank sheet of paper free from any mark, the freshest and most beautiful characters can be written, the freshest and most beautiful pictures can be painted.” What he was talking about was the dream of starting at square one, building from scratch with human raw material, those he called “the dark-haired masses.”

New starts come in various forms: social, political, religious. After the French Revolution there was a short-lived movement to change the calendar. Months were given poetic new names—Thermidor, Germinal, Floréal, etc. A new Year One was declared. Too bad it didn’t last for it would’ve been interesting to see what resulted from people living under months not named after Gods and Roman Emperors.

I favor personal revolutions. My favorite are artists who are motivated by reinventing the world in their image, and happily, my relationship to them is voluntary. Beatniks, hippies, utopians, heretics and assorted dreamers are next on my list. Then it goes downhill. Large scale non-voluntary social movements promising Brave New Worlds are always messier, more lethal and never voluntary. You have to pick a side and no matter how well-intentioned they start out, things always turn sour in a power grab of one sort or another. But the desire for a fresh start is tempting. When I saw the film of the Taliban blowing up the colossal Buddhist statues in Afghanistan, for them it was an optimistic act of a New Beginning. It’s not just the Taliban, all those headless statues one sees in museums were the result of various iconoclastic movements, destruction as progress, cases of people finally getting things right.

There have always been plans afoot for a Great Leap Forward, a Great Reset or A New Deal. They promise social equality, economic fairness and justice. Few have been successful, but that’s no reason to stop trying.