Hanes, Why Do You Do It This Way?

From the diary of Wincus Bean. 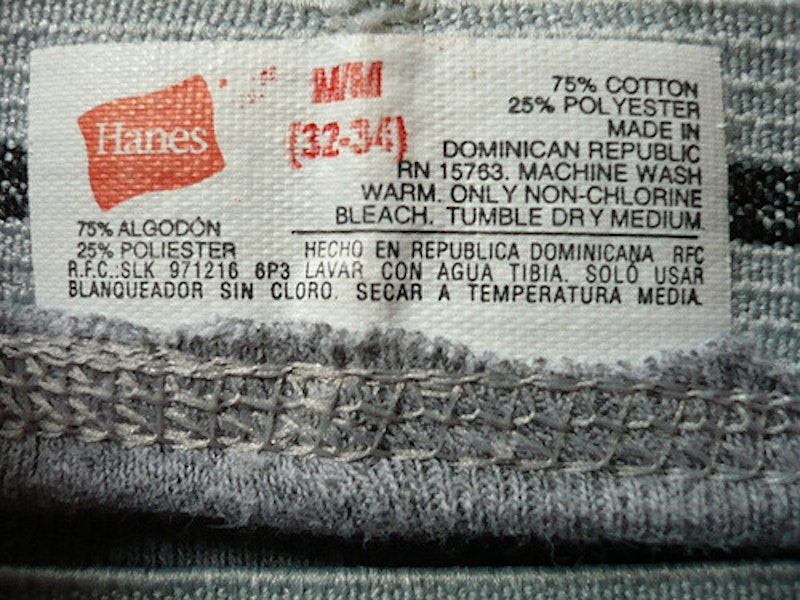 The label on underwear has a purpose that overrides all others: it tells you which side of the underwear is the back. That way you can put it on properly. Hanes has defeated me because the underwear I ordered via Amazon arrived minus labels. Instead, Hanes’ information (company name, Vietnam, 75 percent cotton, miniature measuring cup, miniature washing machine, iron and triangle) is printed straight on the fabric. A label you see right off, type you have to hunt for. To richen the game, Hanes has chosen colors that are hard to find. Not red, for example. If the underwear’s light gray, the type’s dark gray. If the underwear’s dark gray, the type’s white. That should be easy to see, but it isn’t. The white gets swallowed. It’s swallowed even deeper with the black underwear.

Some people might actually want to read the information. I assume that much of the population operates at a higher level of functionality than me. They don’t dump all the colored stuff in the machine and press Colors. That’s why much of the information is there. The little measuring cup and so on, plus the ant trails of text parked nearby. These are supposed to guide savvy types who know what’s what regarding the laundry. Good luck to them, because the text has been printed on blotting paper. Unless I mistakenly bought underwear meant for teen-age sharp-shooters and diamond-cutters, the typical Hanes customer has been presented with a challenge that’s too much for the eyes.

Then there’s me. As outlined above, my challenge is more elementary. I just want to get dressed. Admittedly, I do this standing on one leg in front of a table loaded with laundry baskets. My style of life is so simple that this is where I keep my clothing. The two baskets on top are clean clothes, shirts here and socks and underwear there. The two baskets under the table are for dirty laundry, again shirts in one basket and the rest in the other. That’s the level I’m at and it’s the wardrobe equivalent of shoveling diet bars in your mouth instead of cooking. Perhaps I’m confused by nature and Hanes can do nothing about it. Some people are meant to teeter on one leg and then get stuck as some key detail slips away from them. But no. Likely as the thought seems, seductively as it speaks in my brain, I can’t believe anyone else can read those labels. I mean non-labels. You might as well pick off enemy soldiers on the other side of the valley.

Even now, as I write, I pause to check what I’m saying. Yes, the five pairs in question huddle on my desk. I pick one up—light gray—and thread it through my fingers, searching. I’m like a peasant woman in a documentary about handicrafts—I have a technique. I hunt down the words, thumb and finger holding the fabric straight, other thumb and finger pulling it along by the hem. I find the words and they wiggle at me. Some form up, more or less (“Fabriqué au Viet-Nam,” I think). Others, blocks of them, can’t make the effort (what’s that line say beneath “25% polyester”?). I feel quick gratitude that my laundering habits are so simple. But my dressing habits can’t get simpler. I have to know how each side of the underwear goes. Hanes doesn’t want me to and I can’t tell why. As so often, I feel caught.