The street photographer was famous shortly after picking up his first camera. 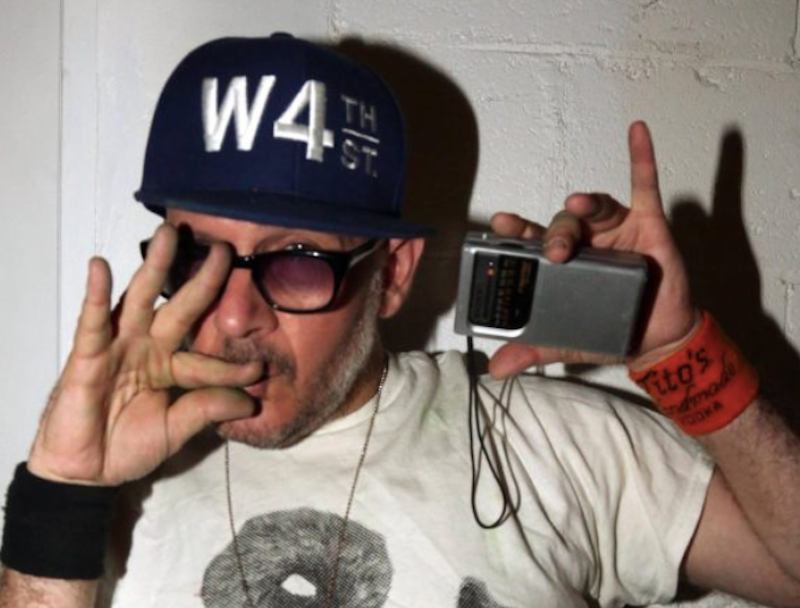 In 1985, in Greenwich Village, superstar artist Jean-Michel Basquiat stopped by a Frōzade (frozen lemonade) cart. The cart guy, who'd add a shot of rum for an extra buck, said, "Yo, whaddup, Jean," pronouncing it "Gene." When Basquiat rolled his eyes and corrected him—he used the French pronunciation for his name—the cheeky vendor replied, "Sorry dude, I'm bad with exotic names." How does anyone get mad at someone with such disarming honesty and this sense of humor? Basquiat allowed the vendor to snap a photo of him.

Not long after, the young street photographer was hanging out in front of the Shafrazi gallery, on Mercer St., with a couple of prominent graffiti artists when Basquiat stepped out of a car with Andy Warhol. The Frōzade guy, loose and spontaneous like the street baller he was (this single trait would be the key to his future success), planted himself in front of the duo (they were collaborating at the time) and said, "Hey, Gene." Warhol shot him a sideways look, but Basquiat said, "He's cool," and they paused so he could get off the shot.

The Frōzade guy was Ricky Powell, a street kid and then club kid brought up with minimal supervision from an unloving single mom in the Washington Square Park area of Lower Manhattan. Powell said he went to Hunter college to become a substitute gym teacher, because it was an easy job, but on a whim he picked up a cheap Minolta autofocus camera a girlfriend who'd just dumped him for an older man had left behind, just to see if he could put her in her place. Some careers are launched out of spite. Shockingly soon, Ricky became a star, just like the people he photographed.

That photo of Basquiat with Warhol launched Powell's nascent career as a street photographer into the stratosphere. To this day, many consider it the iconic photo of the two artists. He'd eventually have his photos appear in The New York Times, The New York Post, The Daily News, The Village Voice, TIME, Newsweek, VIBE, The Source, Rolling Stone, and many more. Powell had six books of his photos published.

At the beginning of Ricky Powell: The Individualist, a 2020 documentary film of Powell's life directed by Josh Swade, Powell says to the cameraman, in his thick NYC accent, "I'm really just a Joe Jerk off. And like, I'm a bummy-ass motherfucker, but my photography happens to be highfalutin’." He and the cameraman had just emerged from inside his small, crowded West Village apartment that looked like a hoarder's paradise—a place that would be perfect for an archeological dig aimed at exploring the downtown art scene in the 1980s.

In that film, actor and Brooklyn boy Lawrence Fishburne summed up the essence of Powell: "You'd see him everywhere. He was a fucking shutterbug, man. He needed to take pictures." Jon Caramanica, embellishing that description, once wrote in the New York Times that Powell "oozed vintage New York City charm and pluck." The photographer loved walking the streets of New York. In a sense, he did "access" photography—which is all about personality—but Powell also had an eye, and he worked hard to improve his formal technique after a pro on the business side talked straight to him.

Powell used a cheap Minolta point-and-shoot camera. Someone who described himself as a "famous bum" didn't need fancy equipment for his brand of spontaneous photography. Expensive equipment would've separated him from his subjects. Embedded in the scene, he'd wait for an opportunity for a shot, and it would be over fast once he got it—before the subject could prepare. The result was spontaneity, which is what made his instinct-driven work art rather than commercial photography. Powell's fish-eye lens portraits of the Beasties, skaters, and punk-rockers became a signature of urban image-making in his era.

Sliding into another medium, while "broke, living in a dump between 14th and 9th," Powell hosted, between 1990 and 1996, what must have been the hippest public access TV show of all time—Rappin' With The Rickster—a vehicle he used to provide commentary on the downtown art and party scenes via candid footage and impromptu interviews.

Powell was raised for the "in crowd." His eccentric mother took him to Max's Kansas City, a downtown bar where luminaries like Lou Reed, David Bowie, and Iggy Pop would hang out. Mom would plant her son by the jukebox and socialize with what he called "the kooks." Young Ricky was on his own in the city early, riding his bike around the neighborhood and playing catch with pimps and junkies in Washington Square Park. The white kid grew up fast, often acting "black," perhaps influenced by all the street basketball he played. By the time he'd reached adulthood, Powell was as "New York" as a person could get.

Many know The Rickster as a hip-hop photographer, especially after he went on an extended tour with the Beastie Boys as Def Jam Records' de facto in-house photographer, and later as the band's "luggage person." He had his own bunk on their bus, and many called him the "fourth Beastie Boy." Powell shot about all of the New York hip-hop stars, but that was just one facet of his work. He captured images of Madonna, Keith Richards, Keith Haring, Cindy Crawford, Brooke Shields, Sofia Coppola, Laurence Fishburne, and many more. One that paid the photographer's rent for many years—a stunning candid shot, taken in a nightclub women's bathroom, of Cindy Crawford.

Culturally, the 1980s were a fecund time in Lower Manhattan, and Powell was everywhere as a chronicler of that scene. Clothing and lifestyle brands saw the power Powell had to capture that culture, and he was busy with commissions. But when the Beastie Boys took an artistic turn in 1995, Powell was off the bus, after which he descended into drugs and depression. It was a comedown for a player who the band once saluted with this lyric: "Homeboy, throw in the towel/Your girl got dicked by Ricky Powell."

Gentrification was underway ("all these New Jack cornballs comin' in"), compounding the castaway's misery. He gained weight and started losing some hair. The cool hipster who'd once pulled chicks effortlessly began staying home in his Village pad and ordering in escorts from the back pages of the Village Voice. His once ironclad confidence was shot, but he had the bucks to create his own fantasy world, at least until reality kicked in.

But Powell was eventually able to rid himself of self-pity and clean himself up. As he put it, one day he said to himself, "You know what, duke, time to change things up." Powell revived his career, albeit from another angle, photographing regular people rather than celebs. He also had the good fortune to hook up with a professional photography assistant who helped him organize things, a skill Ricky never possessed.

The photographer who called himself a "lazy hustler" made a comeback, but he'd neglected his health for too long to expect longevity. On February 1, 2021, Powell died from heart failure.

Powell said his work was "high falutin’," but it wasn't. It was just straightforward. He adored a small patch of land in downtown Manhattan that he never left, and captured the essence of an interesting time gone by. As he put it, "I'm just one man's time capsule. Whoever is interested, great. Whoever is not is fine too. That's all it is."