I once saved a baby squirrel. 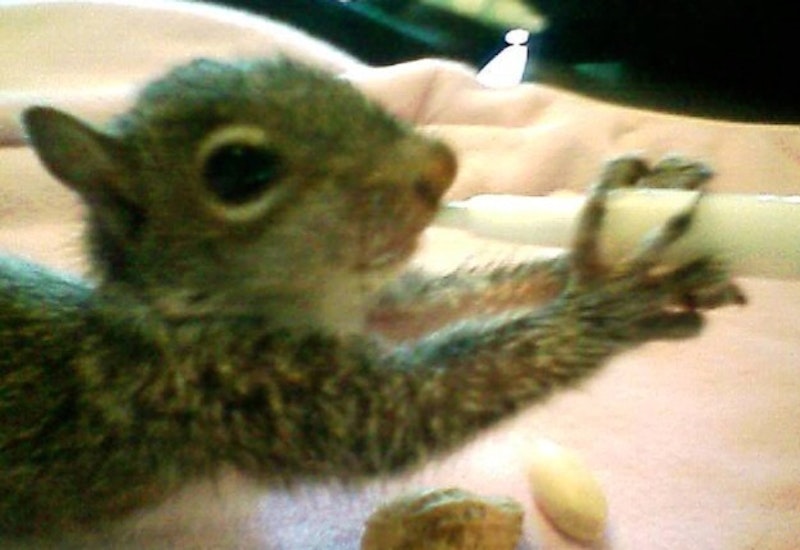 A few years ago my family lived in a beautiful old Victorian house. It was comparable to The Addams Family’s residence and had just as much character with its creaky spiral staircase, hidden attics and eerie dirt cellar. Our backyard was lined with tall Leyland trees. On our front porch our old black cat, Licorice, often sat.

She was always sweet to me, but had a well-rehearsed hiss that outsiders shuddered at. Her ears were chewed away by parasites that no medication could ameliorate. One of her eyes was scarred from a lost catfight, and dozens of others covered her face and head. She had tangles that hung like dreadlocks from her long black hair. Despite her off-putting personality and appearance, we loved her. If there were mice in the house, we let her in for a few hours and they disappeared. She didn’t just slaughter mice, though. During the warmer months of the year, dead birds frequented the back porch along with an assortment of rodents and bats. It was especially upsetting to my younger sister, who always tried to save the half-alive animals that were gifted to us by Licorice.

One day, I ran downstairs after hearing my sister screaming for help. She was outside holding a laundry basket, our old black cat circling her with a murderous glare. My mom shooed the cat away and we looked inside the basket to find a tiny baby squirrel, eyes still closed, with its scruff wet from where the cat had been carrying it. “He fell out of a tree,” my sister bawled, “but I caught him on the pillow!” My mom and I exchanged a worried look. We explained that it was unlikely that the squirrel would live, and suggested we put him in the cellar to “rest for a while.” The next day, though, my sister was back with the laundry basket, which held a baby squirrel, still alive.

I was amazed. He’d spent the night alone in the cellar, exposed to the cold and the cat, and survived. I spent hours researching how to care for the animal, and was soon feeding him formula through an eyedropper which he held with his tiny paws. I had just read Great Expectations and thought that Pip was an apt name. For a few days, we were inseparable. At night he slept on my bed so that his cries for hunger woke me up. Whenever he ate he’d get a burst of energy, crawling all over my sweatshirt until eventually falling asleep in the pocket. One night, his heart rate lowered and temperature dropped. Evidently we’d been feeding him sub-par formula. While my parents went to the closest pet store, I swaddled him in warm washcloths, begging him not to die. By the time they got home I was crying, holding a near-lifeless Pip in my hands. As soon as I put the eyedropper to his mouth, he warmed up and soon was crawling up to my shoulders again.

We decided it was unrealistic to keep a pet squirrel in the house, especially with Licorice still on the prowl outside. I contacted an animal rescuer who worked near Bel Air, and she agreed to take Pip. On the ride there he slept in the pocket of my sweatshirt. I was sad to give him away, but the rescuer showed us her collection of baby squirrels, all Pip’s age, which he would grow up and eventually be released with. I placed him in the box, and he immediately snuggled next to one of the others. I asked if she could send me pictures of him as he grew, which she did. A few days after I gave him away, his eyes opened. He grew to be healthy, unaffected by his traumatic fall and run-in with our cat. He was released into a nature reserve in western Maryland, where I hope he stayed out of trouble.