Journey Up the Slippery Rocks 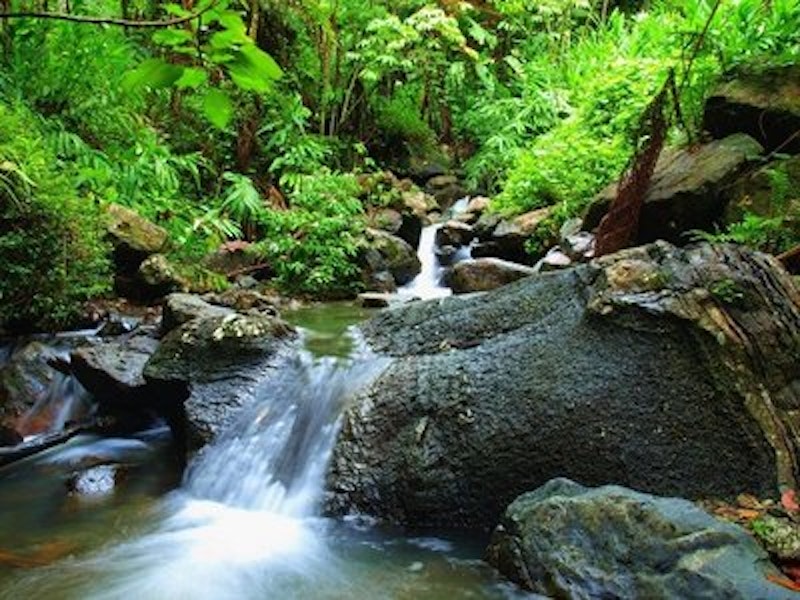 We’re bouncing along a rocky road, climbing up into the forest with Wilson, our Costa Rican waterfall guide. We’re stepping out of the Jeep, leery of poisonous snakes and frogs. We’re stepping along down the path on the side of the waterfall. We’re looking up at the trees and learning about the native culture. We’re starting at the bottom, working our way up.

We’re wearing funny waterproof sneakers. Mine are slightly too big, and take in water, making them more like galoshes. We’re following Wilson’s instructions on where to step. We’re making our way, step-by-slimy step, gradually up the waterfall. The clear water flows softly against our calves, making its way down. Wilson suggests we sit in the stream, up against a good sitting stone, as the water leaps over the rocks against our backs. We’re having a “natural massage.” We’re stepping carefully and we’re feeling like explorers, though the real dangers are mostly in our minds, except for a few treacherous paths. We’re using rope ladders to pull ourselves up a steep incline. I find myself holding the air behind Natasha, catching an imaginary misstep, attempting to be her spotter. Then I imagine an ill-fated attempt, where she stumbles backward and I can’t catch her, a dark thought where we both tumble into the rocky water. But no need to worry today, we’re making our way, no problems. Wilson, who’s a perfect guide, encourages us.

Wilson has a four-year-old girl. She left a present of candy wrappers in his pockets. Wilson has a nasty scar on his stomach. I want to ask him about it, but don’t want to pry. It looks like an uninvited knife went in there. Wilson, with his wide cheekbones, flashes a brilliant smile. Wilson has all kinds of information about the trees, the plants and the insects. Natasha knows about cicadas. Seventeen years underground. Then they arrive, flying around looking desperately for a mate. I joke, “Quick! Where are you? I’m going to die soon!”

Wilson likes to joke, saying things like, “Sometimes it’s hard to tell where to turn when I’m not wearing my glasses.” We’re in Wilson’s hands. I watched those hands on the wheel. They’re strong and tan. He uses them to maneuver around the windiest dirt paths, and to shift the jeep from gear to gear. I remember the ancient white Toyota Tercel that I learned to drive on. The stick shift so loose, the gears became less rigid, more flexible. I can’t remember how that car’s life ended, but it definitely did soon after I learned how to drive. No, I didn’t crash the car. I think my brother took it with him to college in Pennsylvania, and it eventually just gave out.

Some members of the wedding party are out doing the zip line or horseback riding. Some are having a pool party. Boat tours. We’re in a stream. We’re in love with the stream and the cool, refreshing water, and the feeling of being immersed in nature that most hikes only hint at.

I’m watching Natasha as she makes her way up. There are times when uneven paths, rocky trails and loose stones cause consternation. She’s doing beautifully as the water shifts its way around the stones and around us. We’re almost there. We look down below at how far we have climbed. There is a big group following us, but we’re far enough ahead that their noise doesn’t interfere.

We’re wading in the flat, open water, the waterfall cascades above our heads. We’re tranquil. I’m encircling Natasha from behind. We’re floating in the water. After long months of commuting, we are communing. We’re imagining the past, long before us, long before the Spanish invaded Central America. Wilson tells us about the echoing tree that the native people used to communicate from long distances. He shows us the “sour cane,” the plant that is helpful for hangovers. He has us taste it. It’s kind of like mint. I am imagining the future, when we come back here with our 10-year-old child. We’re in the past, and the future, while we’re also fully absorbed in the present.

We’re lucky to be here in so many ways. We’re celebrating the 16th year since we began seeing each other.

Wilson is preparing a pineapple for us. We offer some back to him, but he explains he is allergic. He’s been washing his hands in the water in between slices. We’re heading back down through the windy forest road to the hotel in Wilson’s jeep. He’s looking for a signal on his phone to tell his boss we’re all good.

Tomorrow will be a wedding day. Natasha’s best friend will be married. Natasha will give a speech. There will be joy and laughter and more delicious food. Two families will gather and celebrate their children. I’ll smile and let the day wash over me. We have one more day here after the wedding. Wilson has many more days here, near the ocean and the forest, in a town that has seen so much development in the last 20 years. Some buildings started and never finished when the funding ran out. I hope the next couple he guides through the water will appreciate him and the journey up the slippery rocks as much as we did.