It gave fantasy nerds a new way to worship at the temple of imagination. 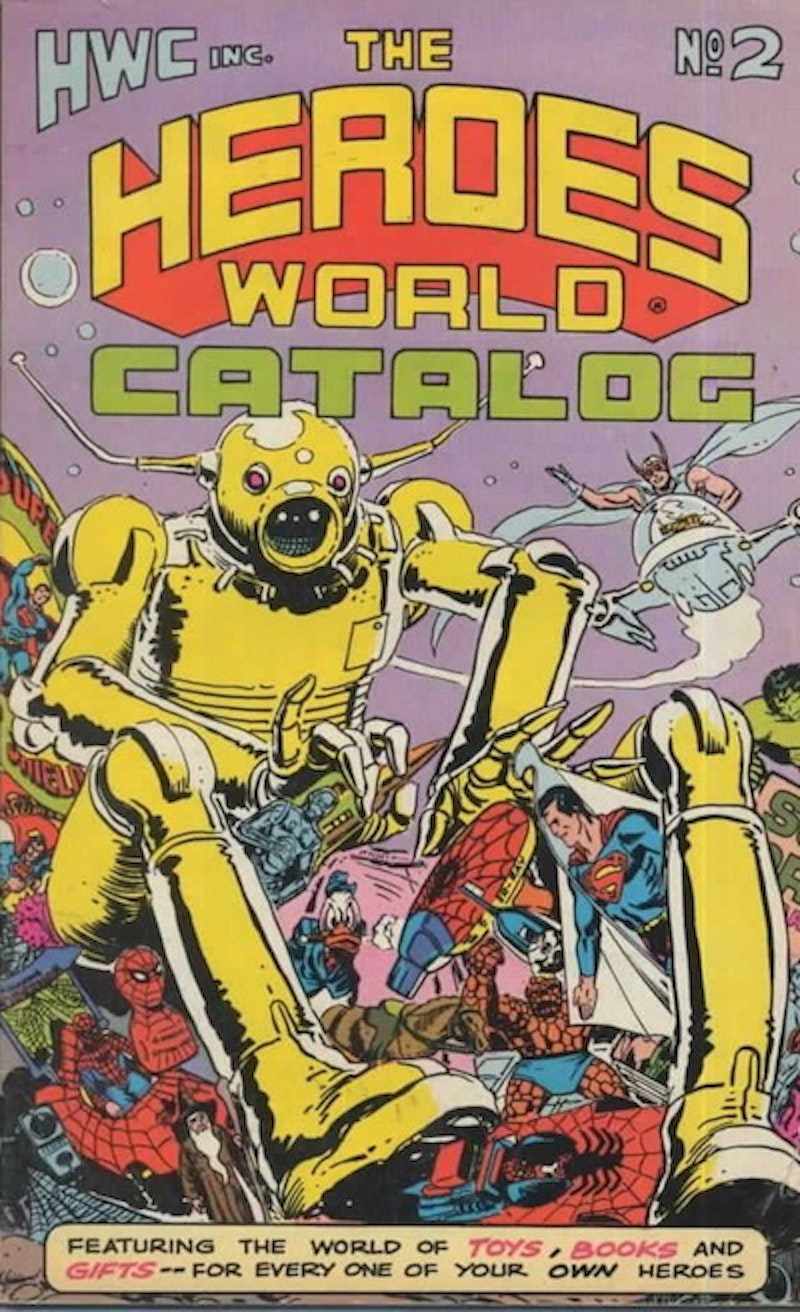 After World War III wipes out civilization the few survivors will try to construct a new society from whatever manages to withstand the trauma. Weak and barely able to live, whomever remains will stumble across leftover artifacts of questionable importance. Some of these things will be ignored as the struggle for sustenance takes precedence over intellectual curiosity. Others will capture the imagination as enchanted fetish items or good luck charms.

If discovered among post-apocalyptic bric-a-brac, the Heroes World catalogue would be seen as a revered compendium of such artifacts. This publication had the feel of an early comic book fanzine. Its scratchy, colorful look was created by students from The Joe Kubert School Of Cartoon & Graphic Art. The pulpy document served a practical purpose. During the 1970s this was the house organ for Heroes World, Inc., which ran a retail chain of comic book hobby shops. Prior to becoming a major name in the independent (or "direct market") retail distribution of comics, Heroes World was a specialty business which sold oddball merchandise related to super heroes and fantasy iconography.

The legend of Heroes World begins in Randolph, New Jersey. In the early-70s, Marvel Comics' head of licensing and mail order was Ivan Snyder. When Marvel shut down its mail order department in 1975, Snyder corralled together the company's unsold stock of non-comic book merchandise, transplanted all of it into the basement of his home in Randolph, and sold it via a new business that he initially dubbed Superhero Enterprises. That name was quickly changed to Heroes World after Marvel and DC jointly trademarked the term "superhero.”

Heroes World gave customers an unprecedented variety of products to choose from, all of which were made in tribute to the inventive mythology of Marvel Comics, DC Comics, and sci-fi/fantasy TV shows and cinema: toys, t-shirts, models, luggage, stickers, patches, school supplies/stationary, coloring books, buttons, clothing, fashion accessories, vinyl records (containing both music inspired by comic book characters and audio play versions of comic book stories), disposable kitchenware, posters, linens, flashlights, and many unique print items and back issue comic books that would've been hard to find all in one place at the time of the catalogue's publication.

Its status as a one-stop mail order shop is not what made Heroes World special. A plastic squirt gun with Wonder Woman's face on it is ultimately a squirt gun like any other. Even HW's status as one of the first businesses of its kind doesn't mean that much. The big reason anyone might care about Heroes World is because it gave fantasy nerds a new way to worship at the temple of imagination.

Rob Kelly summarized the cultural power of Heroes World in a 2018 piece published by 13th Dimension in which he describes the first time he ever read a copy of the company's catalogue: "[C]omics ran ads for stuff like this... but those ads were a single page here and there; this catalogue was 30-plus pages of item after item with characters interacting in a way they never would or could in the comics... To this point I had no idea all this stuff existed so seeing page after page (of it) was akin to when The Wizard Of Oz goes from black-and-white to color..."

By highlighting the aesthetic threads shared by this wide array of fictional characters, Heroes World inspired the global cult of comic books and fantasy that’s since become ubiquitous. It was a midwife for the contemporary milieu where Comicon can be any given year's biggest social engagement.

Of all the ridiculous products Heroes World sold, the most fascinating were their superhero-themed mirrors. These 8"x10" mirrors came adorned with cartoon decals depicting various comic book characters. For a young child, the idea of looking at your reflection while Spider-Man or The Hulk peered over your shoulder could only inspire daydreams of adventure. For the older people who purchased them, the mirrors could brighten life's drearier moments with a splash of color and a nostalgic reminder of young reverie. Some of the mirrors contained a small cut-out section that served as a frame for a photo of the mirror's owner. This was located under multi-colored text phrases like "Captain America and his pal," "Shazam's Buddy," "Wonder Woman's Friend" and so on. Page 17 of the 1977 Heroes World catalog featured a detailed description of the super hero mirrors along with a bizarre instruction: "They ALL have this fabulous, far out, and funky new feature—A PLACE TO INSERT YOUR OWN PHOTO (watch yourself age as the photo remains the same).”

It's hard to figure out what emotional outcome this feature was expected to generate. Maybe Ivan Snyder and the Heroes World crew really thought that the combination of a fictional superhero, an old photo, and a modern reflection could hold symbolic power. Nostalgia, the imaginary, and the ever-changing now: a holy trinity!