Radiohead and the Cosmic Christ

Immerse your soul in love. 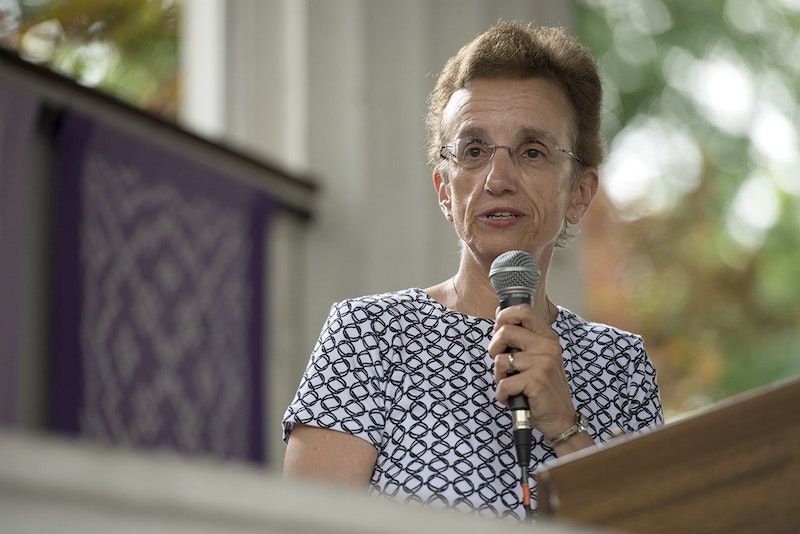 The first time Ilia Delio got touched by God she was getting ready to go on a dance date at West Point. It was 1973 and Delio, a Catholic girl from New Jersey, was preparing for the evening when it hit her.

"Now, in this moment, chronos (sequential time) turned into kairos (interrupted time or a critical moment). I remember lifting my head out of the sink and drying my curls with a towel, when all of a sudden I felt the power of God’s love invade me, as if swallowing me up. It was as if everything inside of me no longer belonged to me but to God. My heart had burst into a fire… and I felt grasped by a power behind my control."

Delio is now Sister Ilia Delio, a Franciscan nun and the author of Dancing Star: My Journey from Cradle Catholic to Cyborg Christian, her fascinating new memoir. Sister Delio holds the Josephine C. Connelly Endowed Chair in Theology at Villanova University, and is the author of 20 books. She is an apostle of the Cosmic Christ, a theology that interprets Catholicism through evolution. It focuses on love as the great mover of the expanding universe that began with the Big Bang. The Cosmic Christ is an alternative to the mechanistic, Newtonian universe that Delio calls the “wedding cake” model; the wedding cake model is a three-tiered cosmos with heaven, hell, and human soul in between and God, the clockmaker, on the outside looking in.

The Cosmic Christ is not outside the universe, but is the love baked into its evolutionary center. Science and evolution are the holy materials of the cosmic plan that has unfolded over billions of years and will continue to unfold over billions more. It’s a part of our births, our lives, and our deaths, which will transform us into something greater, more loving, more beautiful. At the quantum level everything in the universe is connected. “I want everyone to see that we are loved into being at this moment just as we are by a God of unconditional love,” Delio told the National Catholic Reporter. “We emerge out of this long, cosmic process we call evolution. But evolution is about deep relationality. We are created for love, and that's what keeps pulling us onward.”

Delio’s personal style was summed up in the Reporter: “Delio's intellect works like a hummingbird in flight. As she speaks, she moves swiftly and precisely from physics to medieval theology to the 20th-century mystics. She feverishly taps each of these sources, cross-pollinating ideas and generating new, complex images of God and the universe.”

Delio’s theology offers an alternative for people who are Christians and don’t deny the thrilling forward momentum of life and the role of science and the arts in that journey. I’m a Christian, but for many years—decades really—there has been a tension between my two passions, the love of Christ, and the creative and intoxicating world of artistic modernism. I was raised in an artistic family, and part of the development of our souls meant not just Sunday mass but also the discovery of new modernist art—James Joyce, the paintings of Edward Hopper and serigraphs of nun Corita Kent, avant-garde jazz, E.E. Cummings, science fiction, French New Wave cinema, the music of genius art-rock group Radiohead. Radiohead’s evolution from guitar rock to the more expansive and mystical electronica, their futuristic music charged with the energy of creativity as well as existential mourning, but ultimately consummating in love—“immerse your soul in love,” the coda to “Street Spirit,” is like a musical map of Sister Delio’s mind. If Delio’s right, Christ is the evolutionary driver of modernism. He’s found both in the Bible and David Bowie, whose music was notable for its science fiction influences. It’s why a great pop song can wed clever time signatures and rhythms to an ecstatic message of love, resulting in chronos dissolving into kairos.

Born Denise Delio in 1955, Delio was raised in Newark, New Jersey by second-generation Italian immigrants. Her mother was a nurse and her father worked for the railroad. Delio earned undergraduate and master's degrees in biology and a doctorate in pharmacology from Rutgers University's New Jersey Medical School. Her research landed her a post-doctoral fellowship at Johns Hopkins University School of Medicine. Yet before going to Hopkins she came across the work of Thomas Merton, the Trappist monk who became one of the famous priests of the 20th century. But just months before Delio was to begin her new post, Merton's spiritual masterpiece The Seven Storey Mountain rekindled her desire for contemplative life. "I saw my life in his life," Delio writes. "I longed to love the world from afar and live only for Christ.” Conflicted, Delio signed up to join a Carmelite monastery in Pennsylvania the same day she signed an agreement to go to Hopkins. God won out, and she had to break the news to her heartbroken—and enraged—family. Her PhD in pharmacology was mailed to her by a friend in a brown paper bag.

Delio went from the Carmelites to the more liberal Franciscans, who wore jeans and gave her a new name. "Ilia" is the Greek feminine translation of Elijah, the prophet ascended Mount Carmel to challenge 450 prophets of the false god Baal. Delio did post-graduate work at Fordham, studying historical theology, with a focus on medieval theologians and St. Bonaventure, on whom she would write her doctoral dissertation. She also came across the work of Pierre Teilhard de Chardin, the Jesuit paleontologist who developed the concept of evolutionary Christianity, theorizing that the whole of creation was progressing toward fulfillment in Christ. The goal of the universe, which he called the Omega Point, was full consciousness with God.

The Omega Point is what we’re moving towards. It’s the point of everything. It’s why Delio was zapped by God as a high school senior all those years ago. Left to its own devices, the universe might even make her the next pope. Or as the Thompson Twins put it, love is the law.