Moral Problems of the Masked Era

I won't deny the exhilaration of concealment. 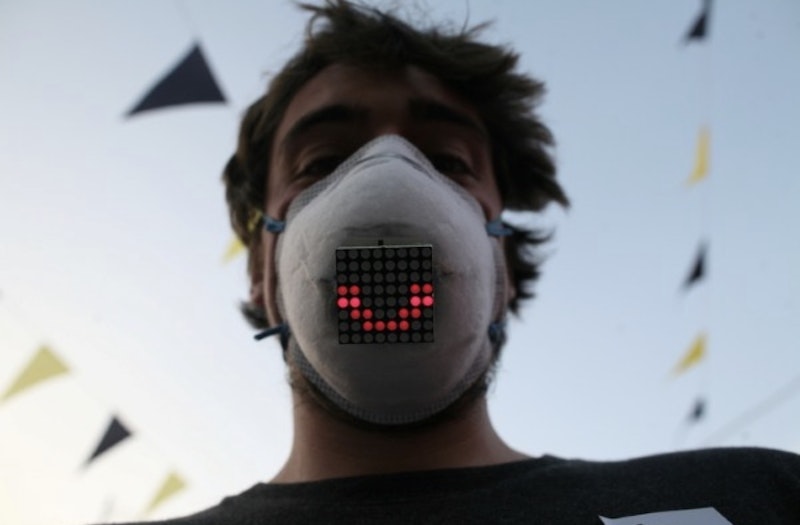 A week or so ago, I was at the garden center out here in rural Pennsylvania, buying Big Boy tomato plants and Swiss chard, dealing with the run on pole beans (out of stock). My partner and I waited semi-patiently with our plants in the tape-separated checkout line. When we got to the register, they had to call out to the yard to see whether there was still any bark mulch (I wanted four bags); no one answered.

They paged Carl; Carl did not respond. "Just forget about the mulch," I said to the nice, if somewhat bewildered, checkout lady. Then I turned and addressed my partner, loudly enough to encompass everyone in the vicinity: "We're never going to get out of here, are we?" The concomitant eye-rolling was no doubt exaggerated a bit, to compensate for the fact that I couldn't subtly frown my impatience while remaining apparently polite.

I acted like the sort of jerk whom I might on another occasion deplore. And reflecting back on it as I unmasked myself in the car, it struck me that I probably wouldn't have behaved that way without the face covering. With people looking at my whole face, I'd have simulated a bit more patience with and human connection to the people trying to help me. Deep inside, I'd be whatever person I've always been, but mask-less I might've acted as though I were a decent person. And acting like a decent person is, in fact, being a decent person.

I fear that masking up in public is making me worse than I was before, or that it shows that I was never as good as I took myself to be.

There's a story in Plato's Republic, perhaps swiped in a friendly way by J.R.R. Tolkien, known as "The Ring of Gyges," about a shepherd who finds a ring that renders him invisible. He uses it to murder the king and take over the kingdom. The young men talking to Socrates in the dialogue suggest that no one would be able to stay good if they had such power: if we could become invisible, we'd all be robbers, rapists, and murderers. The awful suggestion is that the only reason any of us aren't all those things is because, if we were, people will identify and punish us. To the extent that we're not doing evil right now, we're refraining only out of fear, or "prudence."

A mask is no ring of invisibility, even if it is an enhancement of anonymity. However, even Tolkien's minor rings of power corrupt.

And taking it from the other side, everyone I pass on the trail at the park down in Boiling Springs looks pretty much the same: they constitute a procession of blanked-out faces, unreadable eyes peeking out above. Who's under there really? A terrorist, a criminal, a cop, an old friend? I cast a suspicious if uninformed glance in their direction and maybe give a "Hey, how's it going?" But do I care about their unanimously anonymous selves, really? And of course, for the people coming along the other way I have become merely one in the procession of indistinguishable semi-humans. I wonder whether I look threatening, stupid, or whether I register at all.

Concealing the man without may corrupt the man within. I don't want to believe this about myself, and I definitely don’t want to believe it about everyone else, for in that case public decency and civility is liable to disintegrate in the masked era. On the other hand, I won't deny the exhilaration of concealment; it's like letting my repressed asshole out for a good run. Perhaps I'm only now becoming myself. There’s a difference, after all, between apparently being a decent person and actually being a decent person, and perhaps to heal your dark side you have to become conscious of it. To cease to be an asshole, you have to realize that you're an asshole. A mask can reveal a lot.

After these non-dramatic experiences of the new ordinary, I'm suspicious of masked people, especially myself, while also taking a certain sickish delight in my newfound apparent impunity and the newfound apparent impunity of us all. Like France itself, I urge that masks ought to be both mandated and banned for all persons; you, and especially me, ought both to be required by law to mask up and imprisoned for doing so. If the prisons are still doing intake, which seems unlikely.

And like much of the rest of America, I'm wondering when it will be safe to "reopen" our prisons, which are so central to our psychological security and our very national identity.