Pull Out Your Dead Teeth

I’m all lost in a medical bureaucratic jigsaw puzzle. 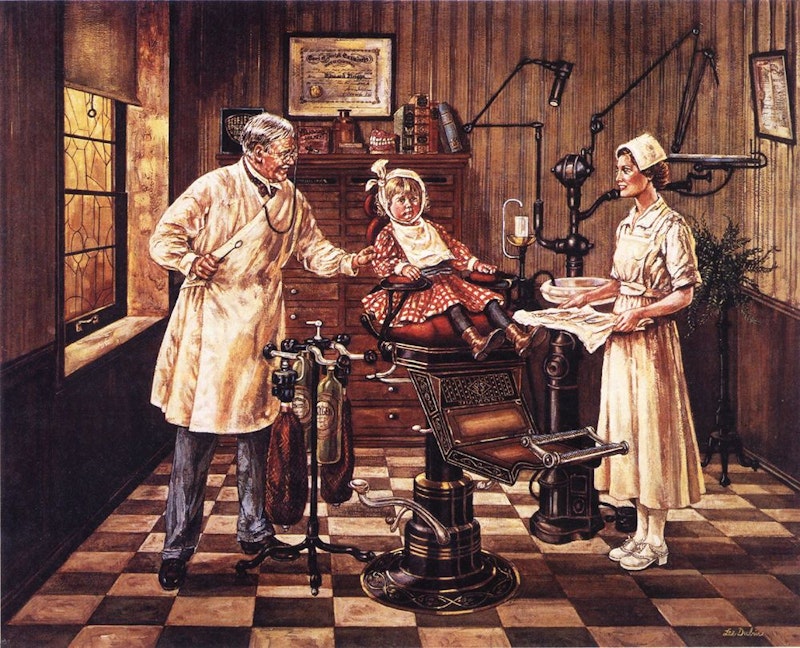 Matthew Sweet hit the Billboard charts in 1995 with his song “Sick of Myself,” which, as I recall, was his last gasp as a pop star. Maybe not, could be at 40, I just stopped paying close attention to new music and gave Matthew and guitarist buddy Richard Lloyd the short shrift. But it was a great tune and I thought about it on Monday when going 10 rounds with Team Dentist, who, I suspect, fucked up a crown procedure three weeks ago.

I’m not sick of myself. I’m sick of doctors who don’t even consider possible mistakes, or, on a day off, leave the latest malady to a colleague to clean up. I had one of those ice-bag toothaches last weekend, and knew trouble was ahead, especially when I couldn’t sleep on Saturday night. On Sunday morning called Team Dentist’s emergency line and told the fellow that I looked like Alvin the Chipmunk, even after I took a sterilized razor blade to a lemon-sized abscess, pierced it, and more blood than the field of Antietam flowed down my cheek and into the sink. “Good thinking!” said the doc, “I bet that took some pressure off.” It did, although the somewhat blasé attitude was for robins that don’t rock. He did call in a scrip to my local CVS for stomach-fouling antibiotics.

He said hold steady, my friend, and we’ll set up an 8:20 appointment for Monday morning. I took that at face value—why not?—and Sunday wasn’t an agony fest like Saturday, thanks to my no-schooling dentistry skill with that Gillette blade. I was in a decent mood while watching Grosse Pointe Blank with my family that afternoon—foregoing Boston’s Tanner Houck’s superb one-hit performance against the Yankees, one of maybe four bright spots for the Red Sox this season. John Cusack had it going on in the late-1980s and 1990s, especially with The Grifters, Say Anything, Eight Men Out, True Colors and Grosse Pointe, and then just fizzled out and became a b-list horror flick kind of guy while in public pretending to be a descendant of Eugene Debs. But he’s great in Grosse Pointe, looking a bit like Michael Corleone with the slicked-back hair, and more interestingly, reciting some lines with a Bill Murray buzz, and it wouldn’t surprise me if Cusack—like Murray, a Cubs fan—went to school on Murray’s early movies.

Anyway, my mind floated like a lazy eye during the 15 minutes on Monday when Team Dentist, after giving me headache-inducing news that there was a screw-up and my 8:20 turned into a 4:45 and scurried to the list of endodontists they could farm this job out to. I thought about my long-departed dad, a no-nonsense man who was heroic to his five sons, even though he was a dud at telling jokes. Some got it, some don’t. Dad’s standard joke, several times a year, was when upon seeing a dour schlub at a holiday party, would say, “Isn’t he the undertaker?” It was funny the first time; after that we’d politely chuckle. My mom was better, if not Lucy Ricardo. She got off a good line or two—before it became popular—telling this or that brother who committed the sin of getting a B in earth science, saying, “Keep that up, buster and you’ll be attending a community college in East Cupcake, Iowa.”

I’ve got nothing to brag about in that department, although on occasion I’ll murmur with disgust a quip that tickles my sons. One time, when movie theaters were open—last summer was it, or five years ago?—we were walking to the Harbor East Landmark in downtown Baltimore, and passed an ATM, where a college-aged woman was splayed out on the floor, studying from a number of texts, and I said, “What is this, Woodstock?” Nicky and Booker exploded, high-fiving, and one said, “Dad bodied her!” I didn’t let on, but was happy, since receiving a thumbs-up from your kids is one of the best things in the world. Booker’s not bad on the joke front; trouble is, he has these convoluted, five-minute build-ups, and cracks himself up in the telling, so the punchline is always anti-climactic. He’s done that since 1999, when, at five, he proclaimed Feb. 2 National Toy Day (a cheapo that was only exceeded by insisting we celebrate his half-birthday every year. Always working an angle). In our family, joke-wise, Nick comes out on top.

You know these thoughts, which seem long when jotted down, flew by like a dream, and when Team Dentist returned with bad news on my doorstep, I was instantly roused into mad-hornet insolence. Which, I’m not especially proud of, can get ugly. The long and short of it is, on Tuesday the endodontist said he couldn’t do anything with the damaged tooth (a mensch, at least he didn’t charge me for his hour’s work) and next week I’m off for a tooth extraction from another specialist, and God knows how many follow-ups after that.

Oh, I also, and needlessly, taxed by non-swollen brain thought about all the nitwits who’ve now disowned Van Morrison because the 75-year-old singer had the temerity to write three anti-lockdown songs. Amazing. All these people, my age or older, saying even though they “adored Van the Man” for Astral Weeks, Moondance, Tupelo Honey and the shitty stuff after ’76, now say he’s an asshole. In one ear and out the other, and “Brown-Eyed Girl” and “Glad Tidings” will soon return to playlists all over the world. And when Van croaks, everything’s forgiven. Bob Dylan, as we found out in 1977, was a wife-beater, yet when his atrocious Rough and Rowdy Ways record came out recently, the same people who’ve kicked Morrison to the curb, said, “Dylan is what need now. Because 2020.” Christ, now my brain does need a lancing.