A Tightrope Between Good and Evil

The current residents don't buy the story; it makes them laugh. 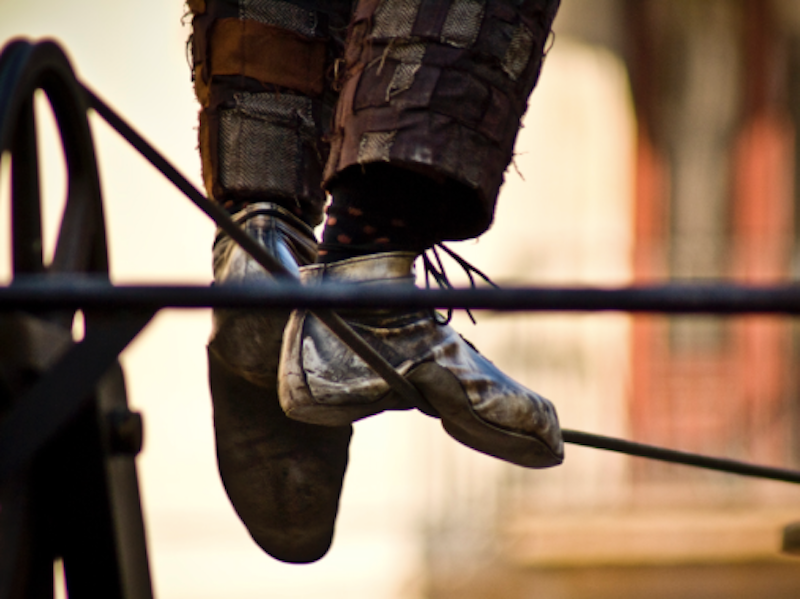 In an earlier piece for Splice Today, I wrote about some phrases that have popular usage due to the pandemic. Recently, I’ve seen the word “tightrope” more frequently than I can remember.

“We’re walking a tightrope between danger and safety,” they say. “This is a tightrope act between good and evil.” And so on.

Aside from the obvious “wire or rope stretched taut,” tightrope also is defined by Merriam Webster to mean “a dangerously precarious situation, usually used in the phrase “walk a tightrope.”

Doing my best to better understand tightrope took me to Tsovkra, republic of Dagestan, Russia. Or, more precisely, to the town of Tsovkra-1, named with the numeric, so as not to be confused with the original town of Tsovkra. Someday, I’ll look further in to the argument between the two locales—“No, this is Tsovkra.”

In this country, as well as others around the world, any discussion of tightrope walking brings to mind Karl Wallenda, or his grandson Nik. The tragedies that have befallen the Wallenda family are numerous; in 2011, Nik completed the walk that had killed his grandfather in San Juan, in 1978. Nik continues to perform high-wire walks; you may have seen him cross the Niagara gorge from the U.S. to Canada in June of 2012. ABC, intent on not airing a daredevil’s death on live TV, insisted Wallenda be tethered to a safety harness.

The Wallendas are German, not Russian. These days, if you’re looking for a tightrope walker, your best bet may be in Tsovkra-1, where, it’s said, the whole town walks on wires. Every able-bodied Tsovkran is reported to be a tightrope walker, in a town that has had as many as 400 residents.

Legend says that the town’s young men didn't want to make the long trek to a neighboring village to find eligible young women, so they devised a way to string rope in the mountains, creating a shortcut. The current residents don't buy the story; it makes them laugh. I wonder: if this had been the way to find a new girlfriend, did the guys discover a new aerialist trick by bringing the woman back home, on their shoulders? Did anybody have a unicycle?

The Caspian Sea is a massive body of water, and the water level rises and falls, precipitously. There’s a theory—entirely mine—that the ability to balance, or balance better than most, may be related to living through large climatic and pressure changes, based on the water level fluctuations. Our sense of balance is rooted in the inner ear. The vestibular system, which keeps you on your feet, is made up of canals that have fluid in them. The walls of the canals are lined with tiny hairs, and as you move, or even tilt your head, the fluid moves over the hairs. Your auditory nerve takes messages from the hairs, and tells your brain about your relative position. When you lift a leg, and hold it up, you’ll eventually get a message to move in one direction or another. That’s the balance system at work.

If the barometric pressure around you is changing rapidly and frequently, it’s possible that you’re unconsciously improving your vestibular capabilities, especially over generations. “Hop up on that rope,” doesn’t seem such a foolish pursuit, because standing up there, as an average Tsovkran, is a piece of cake. The rope might as well be a flat, smooth 4x8.

No one’s able to pinpoint when the people from this shrinking town began prancing across ropes, but we do know that they’ve been doing it for some time. Residents have joined Russian circuses. It’s what they do. There was at one time a tightrope-walking school, housed in a modest two-room building. Like a lot of schools, they’ve run out of money, and the number of tightrope walkers continues to decline. I have another thought. Wouldn’t it follow that the Russian athletic apparatus look in Tsovkra for their next balance beam participants? On balance, it might be a good start.