Strikes and gutters, ups and downs. 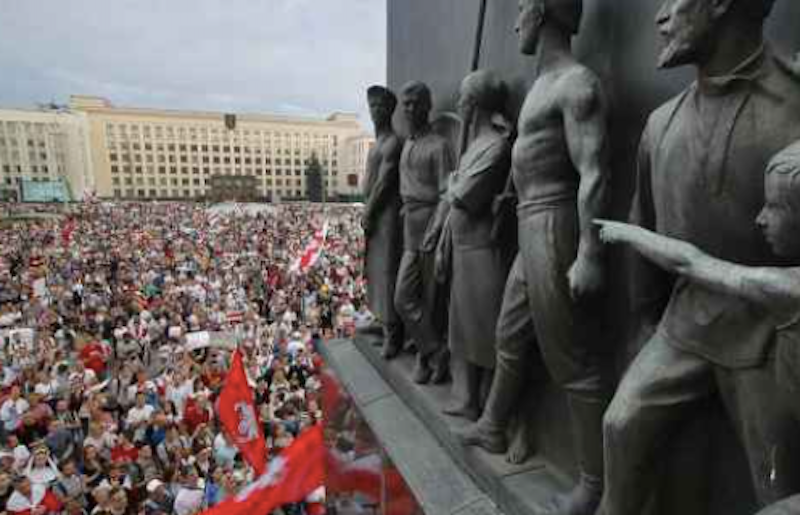 In the strikes/ups category we can file the increasingly likely Anschluss of Belarus with Mother Russia. This development would shore up the Kremlin’s bulwarks against Western aggression, plus take a step toward fulfilling a historical inevitability: the return of all the Russias to the Kremlin’s embrace. A step toward the re-establishment of the sacred Unity of Russia.

In the gutters/downs bucket: the recovery of Mossad-sponsored Russian traitor Alexei Navalny from his poisoning. But no matter. We take our disappointments in the course of things. To quote St. Hermoganes Dolganyov, hieromartyr, Bishop of Tobolsk and Siberia, “We must swallow the salt with the substance.”

In truth, it’s hard to be upset even by such an atrocity as Navalny’s survival now that autumn is settling its mellow dominion over my beloved Indiana countryside. The first touches of gold and amber are gracing our meadows here. The mornings are glorious—clean, crisp, fragrant—and the days have been delightfully cool and blue. I am blessed.

Damon Linker in a recent column surveys the unsettled American Scene, and finds it troubling.

“I don't know if this is the beginning of the literal end of the world,” he writes. (The literal end of the world. Good heavens!) “But it does appear to be a new normal—and one that at any time could, and almost certainly will, be supplanted by another that's even worse. Together with the other apocalyptic signs surrounding us, it serves as an important and deeply troubling revelation about our country.

“If the United States is incapable of holding an election the outcome of which can be definitively known and trusted, does our government really deserve to be described as democratic? If our public health system can't lead the world in halting the spread of the worst pandemic in a hundred years, are we really as worthy of admiration and emulation as we like to suppose?”

“What has been revealed these past few years—and this year most of all—is that we are not the country many of us supposed we were. However unedifying it is, that's a truth we desperately need to face—and somehow learn to live with.”

I should go light on Linker. His spiritual peregrinations could well soon make him an adept of the Russian Orthodox Church (Moscow Patriarchate, needless to say), and thus my Brother in Christ. Still, it’s startling that any adult human being could ever have existed in such a fantastic state of enchantment that the subsequent disenchantment that Linker here betrays could even be possible.

Really? It’s been only in the “past few years” and “this year most of all” that Linker’s felt his faith in his country go wobbly?

Nothing else in the roughly half century of his existence on this planet ever compelled him to do a bit of reckoning about the country he was born into?

I’ll refrain from diving into the historical record to cherry-pick another 100,000 or so items that might’ve been expected to shake the faith of even the most passionately unperturbed centrist. “America is already great!” warble the liberal pundits, grinning with bland bonhomie as they stagger in their Tevas over the heaped mountains of the dead.