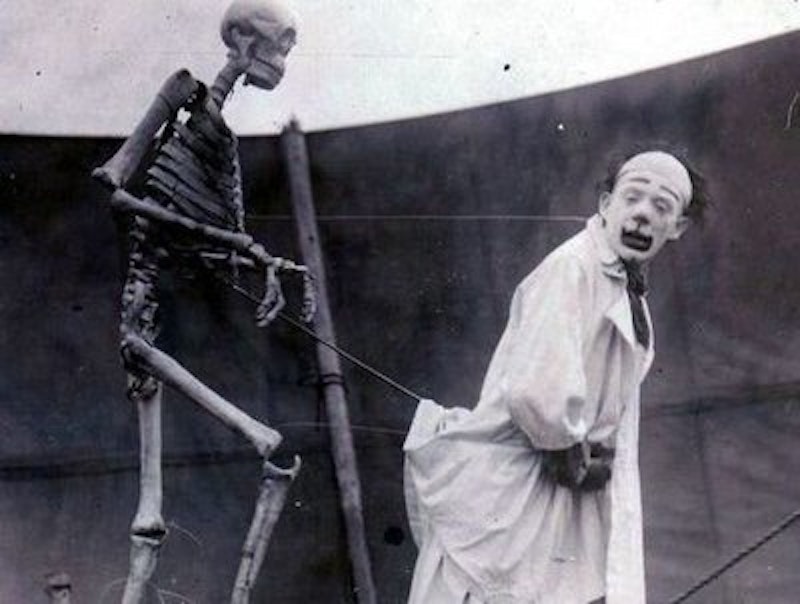 I’m happy to say that the curse I laid upon Hillary Clinton on July 22 and announced here on that day has clearly succeeded. Her health was not an issue at that time. When I curse ‘em, they stay cursed. The frog helped. I love Pepe the frog, a.k.a. KEK, an ancient Egyptian avatar of chaos. Crude hoodoo works, kids; it just isn’t appropriate to every situation. If the reports of her off-camera meltdown at NBC studios following her unpleasant encounter with Matt Lauer are any indication, she signed her own death warrant when she shrieked, “If I go down, we all go down!” That’s not something that you say when you’re working for the kind of people she works for. I think it’s safe to say she’s toast, and move on to other things.

The cops in this country are out of control. It ain’t just black people. It’s cats and dogs all over the place. Who would shoot a fucking cat? They’re gunning down plenty of unarmed white folk, and the American Indians are the ones most likely to be killed by the police. Oddly, they don’t seem to kill many Asians or Jews, maybe they don’t find them “threatening.” Whether the rise of surveillance devices (“smartphones”) in the hands of civilians is simply revealing misbehavior that’s been going on all along or DHS training is having a bad effect is anybody’s guess. As we used to say at the circus, “Don’t fix the blame. Fix the problem.” If a money-laundering banker from HSBC with no background whatsoever in law enforcement can run the FBI, I can offer a few suggestions from the cheap seats.

The fastest way to curtail police violence would be to shift the burden of the inevitable civil settlements paid out to the survivors and the families of victims of police violence from the taxpayers to the police unions and pension funds. That’s actually very easy to do in most places, a simple legislative move, and it would end this bullshit in a New York minute.

A cop ought to be drug tested instantly every time he or she discharges a weapon. They ought to be drug tested at random, like hospital workers are. They need to be trained in Isaac Asimov’s First Three Laws Of Robotics, because quite frankly they are the next to go after the fast-food workers. Most people trust robots more than cops, and few are foolhardy enough to fuck with one. Robots are not frightened of cats, dogs, small children with toy guns, black people, or monstrous gibbering humans on bath salts. A robot has no need of steroids.

This country is swamped in heroin, largely sourced from Afghanistan by the Usual Suspects in Defense and the Alphabet Soup. President Trump should order all ground troops out of Afghanistan and order a massive napalm strike against the poppy fields, while simultaneously drone-striking the mansions of the Cartel leaders here in the Western Hemisphere. Fully legalize cannabis and open the way for the famous Invisible Hand Of The Market to destroy the pharmaceutical opiates.

There is no water crisis. There is a crisis for shareholders in obsolete centralized water purification facilities. Genius inventor Dean Kamen solved that problem with his invention of the Slingshot, an incredibly easy to operate device which extracts pure dialysis-grade water from any liquid, no matter how polluted. This eliminates the need for gigantic centralized water filtration systems and the constant maintenance and upgrades to the pipes. Unfortunately, the two biggest investors in Kamen’s device are the Clinton Foundation and the Coca Cola Company. Coca Cola is making a fortune reselling tap water as Dasani water in Flint, and there’s no telling why the Clinton Foundation has invested so much money in it only to keep mum about it in the midst of the current water emergency. Maybe they have stock in private water companies.

Cheap hoodoo doesn’t work without exacting a price. In my most recent exercise against that corrupt murdering hag, I became severely ill myself for about nine days. I’m recovering nicely. She, on the other hand, is either dead or circling the drain. It’s hard to tell. She has more doubles than Saddam Hussein.

I’ll leave it to Vlad Putin to take care of George Soros. I think we’re pretty near an endgame of sorts. Now that Mercury has gone direct, I’m going to put my skills to good use by saving the Big Apple Circus. There’s a lunatic billionaire Down Under, very much my kind of guy. I have to meet him. It’s time for some good news, for a change. The world needs more circuses.