Diary of a Bushwick Buyout #2

Meathead super pays a visit to the apartment. 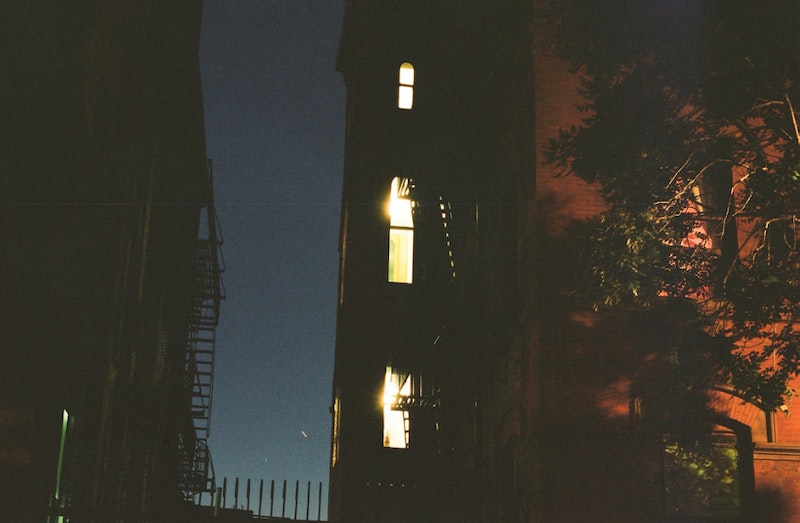 “Damn it. Where is this super?” I bitched, sitting on my couch Monday, working from home when I could have been typing away grant proposals at the coffee shop where they serve delicious cheddar biscuits and iced coffee. “Paul promised to come at 10 a.m. I’m calling his ass now. He isn’t going to have me sitting around like a moron all day.”

“Right away,” Paul appeased me. “I’m down in the courtyard. Coming right up. Give me five minutes.” I paced the kitchen and living room and stopped when thunderous knocking shook the door. “Super! It’s Paul.” I put an eye to the peephole and took in the convex distortions of the arrogant meathead: nose-beak, pork belly, gorilla arms, greased hair. A mythical beast in tattered jeans and t-shirt, this was the jerk who had reamed me out about the 311 complaints. “Coming!” I opened the door and let Paul tumble in like a bull through the gate. He wasted no time. “Now what is wrong? You tell me. Whole fridge is not working or just the freezer?”

“I’ll read my notes. ‘Drain trough along the back wall of fridge is broken off on one side. Water does not properly drain—’”

I had my laptop open to read the list to Paul verbatim. He hated that and did all he could to shut me up: “I know already.” None of it was music to his ears. Paul sneered, “Look, I am professional. You don’t need to explain in detail. It’s a little insulting. Trust me. I am many years professional supervisor. You say fridge, I automatically know, boom, what is wrong with the fridge, and I call the guy to get a new one, not 100% brand new but almost new and working, a nice fridge.” He promised he would do something about the cheap old cabinets that were sagging and fix the burners that had stopped working on the stove. When I asked about his plans for our kitchen friends, the roaches, he wrinkled his nose and curled a fat lip. “Yeah, well, you know, roaches and rats, they say, are a Bushwick tradition. But we’re going to have exterminators come regular.”

Paul ducked out of the kitchen and penetrated the apartment. “Let me show you the bathroom,” I provided direction, because he was hunting on his own like a dog. “Yes, the bathroom,” he assented. “Door is off hinge?”

“Go ahead. Try to shut it.” The hinges would not stay screwed into the doorjamb. It was a prior super’s sloppy work. When Paul tried the flimsy door, it swung on a diagonal and whacked the frame without shutting. “Not to worry, that’s a simple screw job. Now what about toilet? Doesn’t flush anything?” I wanted his meaty hand to get wet. “Try to flush it,” I commanded. “See, it takes three times to get anything down, and the flush handle drips on your hand. It’s gross.”

“I’m taking a picture,” Paul hovered over the toilet’s steel with his phone. “See that! They don’t have this particular part here in Brooklyn. Rare, expensive part, I have to get special from Manhattan. Takes a little time.”

“And see how the ceiling has a hole there over the sink,” I pointed to the browning gash in the white bubbling paint. “Debris rains down through there and it is disgusting. Gets all over everything.” He looked up. “I get a picture of that too. I can fix it, but that is from lady upstairs. A leak. I have to get in there first and fix it, otherwise there’s no point. I never can. She’s never home to let me in. Please, when you see her, talk to her for me.” I said I didn’t know the woman.

I next pointed out the moldy ceiling leak in the living room. “See how that paint is all cracked, peeling and moldy? Water drops down on that table and the record player. It makes the corner by the radiator stink. Plus the radiator doesn’t work.” Dismissively, he sized it all up, “I can see valve is broken. That is part of it. We’ll get up there and scrape, but again I need access to upstairs. Listen, I am going to have good guys come by and do the work. Just know they’re going to make a mess. You have to work with them.”

“Paul, don’t be hardheaded and make it cost more in the long run. They better not make a mess or they will be right back here cleaning up. Don’t make me contact 311 again.” He swung an arm, “No. Not necessary.” Paul said he would have professional contractors come for the maintenance and repairs. “You just have to be here to let me in. Make yourself available.” I suggested that he provide a schedule but Paul could not commit to one. He admitted that the smoke detector wasn’t real and that I needed a carbon monoxide detector. He complained that my apartment was the only one that contacted 311. A quick search online proves that to be a lie. Did he want sympathy? Paul whipped out his phone to show me a photo of a lady’s apartment in which the ceiling had fallen and rubbish spewed all over the bed. “I obviously need to fix this lady’s place first and then I come to you.” I asked him if the lady still needed to pay rent with all that debris on her bed. “Oh, yes, she does. We fix for her, but she has to pay the rent.”

I played up the urgency of fixing the cracked, unlockable window in my bedroom by recounting that scary night when an unknown guy came up on the fire escape. The guy banged on the glass and asked me to step outside to discuss the stomping noise he claimed I was making, though I had simply come home from a friend’s house at midnight and immediately turned out the lights for bed. “Who was it? You know him?” Paul interrogated me. I said I didn’t go find out. It was dark. I had told the guy, “No!” And I threatened to call the cops if he didn’t leave me alone.

“I bet anything it was one of the young thug, Spanish black guys who live down below. They sell and smoke the weed,” said Paul, playing detective. He claimed management was checking the cameras like crazy, ever since the former super Bob had been caught selling drugs and sleeping with prostitutes in the basement. Paul revealed that he and the owners were looking for a reason to kick out the young thug guys. “We see them on the cameras all the time.”

Paul’s presence and booming voice grew tiresome. I led him back to the kitchen. He made the pitch again by the front door: “Think about a buyout. You let me know and the owner would be happy to come over any time. But we’re going to fix this place up in the meantime. Everything will look new and nice. People like you, I know, want it perfect and luxurious like Kim Kardashian,” Paul laughed. I lost it! I yelled, “Never mention Kim Kardashian in this house again! I do not particularly like her or what she stands for—obnoxious, materialistic idiot, famous for a sex tape!”

For a second, Paul looked hurt or confused, then like he wanted to retaliate. “Oh yeah,” he continued, “Paris Hilton, the blonde . . . she is bad too. Never mind! You’re going to receive all new everything. It’s no problem at all to these landlords because they have the money. Like I said, you cannot fuck these guys. You don’t know them.”

“Oh, I know them, the Ken doll lookalikes. The bad press is all over the internet. They’re flippers.”

“No, you don’t know them. You’ve never seen these guys. The one brother is a beefy, short guy, shaved head. They’re filthy rich and connected in Manhattan. 311 fines are nothing to them. Trust me. They’re gonna say, ‘Paul, make the fixes,’ and that’s it. Tenant association can’t do nothing. Lawyers, nothing.”

“You guys are trying to push people out and destabilize the building!” When I asked Paul if he felt bad about removing the people who have lived here for years, he said, “It’s just business, man. Bushwick is hot. We want to move in the upper-crust whites, new tenants who can pay a little more.” Paul said the landlord wanted to meet me, maybe take me out to lunch. “$24,000, initial offer.” I demanded at least $200,000. “Be real,” Paul cautioned me. “Don’t do no crazy talk when the owner comes.”

These hotshot landlords were working to expedite the clearing of the building, “especially of the Spanish, the poor people not paying nothing, like across the hall from you,” Paul idiotically revealed. I cursed myself afterwards for not recording that. Empty apartments were cropping up on every floor. Classic divide and conquer, Paul suggested that I was different, that—though the owners wanted me out—I was admittedly a bit wealthier (and thus deserving of a smaller buyout), although he might not have realized my apartment is rent-stabilized. “See, we got the longtime Spanish people who are not paying anywhere near the kind of money you pay in rent. Some are paying $400 a month to live here. So they would get the bigger buyouts to get them out.” Paul said he would call that evening to schedule some maintenance. He didn’t.