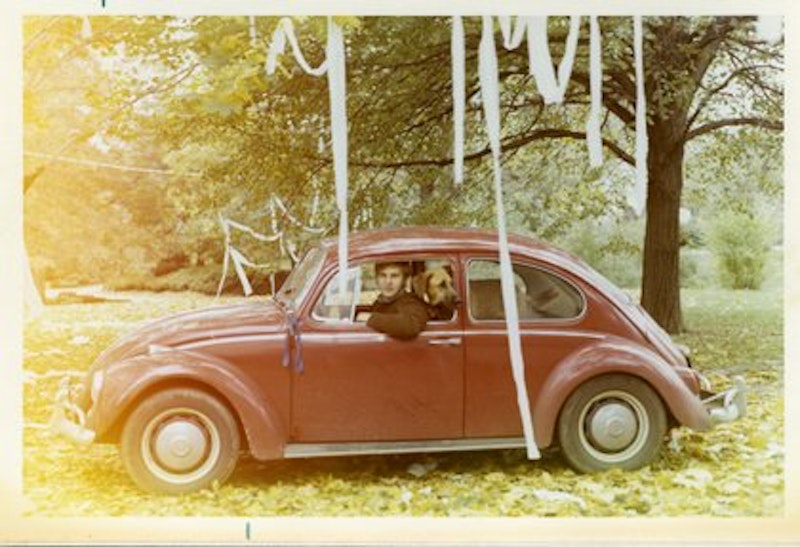 I’ve no idea what sort of pranks teenagers pull in the 21st century—and might be horrified or amused, depending upon where the Red Sox sit in the A.L. East standings—but in my hometown of Huntington, New York, festooning the property of a friend/foe with reams of toilet paper around midnight was, in the early 1970s, a hilarious expenditure of free time. As I recall, the chief instigator for what passed as mayhem was a witty friend named Richard Hoblock, which figured, since he was named “class clown” in ninth grade at Simpson Jr. High School and could crack up a bunch of us almost at will. As is often the case with such characters, Rich occasionally crossed the line with nasty jokes and was banished to no-man’s land in our clique, the penalty box, for a week or so. Several years later, a year or two after college, Rich met up with mutual friends Dave Cicale and Elena Seibert at the latter’s uptown Manhattan apartment, and dramatically told us that he was gay. I think he was disappointed when the three of us shrugged off the news—at least for his benefit—and moved on to another subject.

Anyhow, sometimes the recipient of a TP barrage was undeserving: he or she just happened to a live in a house that was surrounded by dozens of old and very tall trees, perfect for the mission. In hindsight, I’m appalled that the target of the papering was often one of my best friends, Howie Nadjari, a guy who didn’t have a mean bone in his body, and today is a respected doctor living on Long Island. It might’ve been that Howie would get so pissed off, rather than sloughing off the “attack,” which usually immunized you from repeated TP hijinks.

In fact, on a spring morning in 1970, after falling out with some longtime buddies who were—rather puritanically, I might add—displeased that I’d started hanging out with a “stoner” crowd, I awoke to find a rather feeble papering of my family’s house. It didn’t really work since the trees on our quarter-acre plot were hardly majestic, and it took all of a half hour to clean up the mess. My dad, leaving for work at his car wash on Sunrise Highway, commented on the incident, smiled, and told me to take care of it before my mom had a chance to stew and burn up the telephone wires. I did, and then later on got a $1 Italian hero at the great deli Monaco’s on New York Ave., and went to see a matinee of The Beatles’ so-so Let It Be (Paul McCartney’s obnoxious behavior in the film was off-putting, but you have to remember that news of the band’s break-up was still fresh, and shocking, so fans took whatever was on offer). Later I picked up the second Flying Burrito Brothers’ album, Burrito Deluxe (which, aside from Gram Parsons’ mournful vocal on “Wild Horses,” was a huge letdown from the band’s classic The Gilded Palace of Sin) at a Sam Goody’s in the Walt Whitman mall, so it was actually a pretty cool day.

Back to Mr. Hoblock. One night, several of us, gathered at Howie’s large (by Huntington standards) house on LaRue Dr., were chugging too many cans of Rheingold beer, and, as amateur drinkers, met with unfortunate consequences. At one point, about a half hour before Howie’s parents were due back from dinner, I spewed forth a blast of puke that fouled most of the kitchen. We did a (very) hasty clean-up, and, as none of us were driving yet, were picked up by Mary Stilwell, mom of Mark and Teddy, and, as she was a street-smart tough cookie, the jig was up, especially since I ralphed once more while in the front seat. Mary was steaming—who could blame her—and demanded an explanation, as if one was really necessary. Rich, with a straight face, simply said, “I admit, Mrs. Stilwell, we did each have one beer.” She muttered “bullshit” in a low voice and the short journey home was not pleasant, although it made for can-you-believe-it? fodder at school the following Monday.

I don’t know if the phrase “cruising” is still popular among the youth, but as my friends and I, one by one, received our driving licenses at 16, that was a prime weekend activity. One of Rich’s favorite lapses into minor juvie behavior when he was behind the wheel was to drive around the neighborhood of Halesite and purposely knock over garbage cans, after which he’d laugh and say, “Oops, had to swerve to miss a cat!” And then, four doors down, it’d happen again and we were all in stitches. One time wasn’t so funny: Hoblock’s beat-up VW Bug, upon hitting four metal cans at once, got stuck somehow and within minutes lights flashed and an angry homeowner, clad in pajamas, started running towards us. But the luck of the young prevailed, Rich gunned the car and we got away scot-free.

A joke Bobby Ringler liked to pull—and he was normally an excellent, if speed-obsessed, driver—was terrifying the six or so of us in his station wagon when driving down a steep hill by slumping his head down, mimicking a stroke, and not “recovering” until we were about 20 seconds from flying into the Harbor. I liked the garbage can bit a lot better.