Thoughts on a fucked-up teacher. 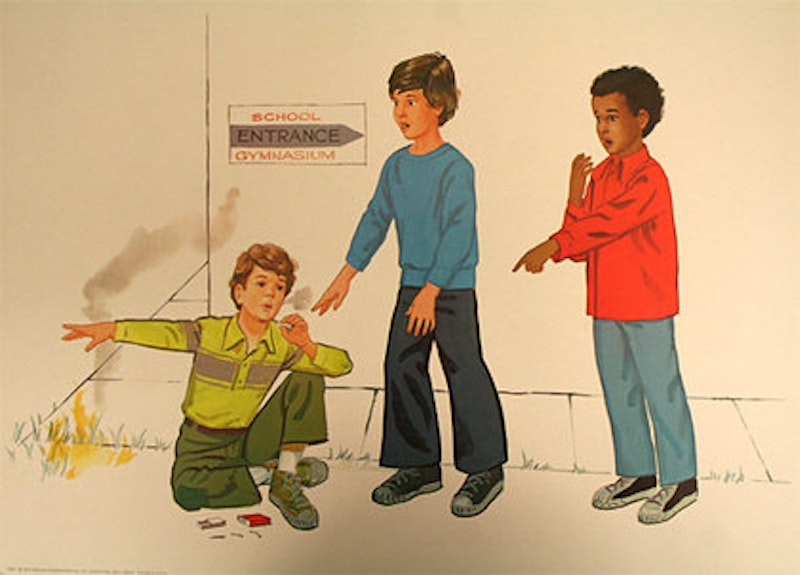 The boy made a promise to himself when he was young, dawn-of-awareness young. There he was, surrounded by the oversize flanks and limbs of mommy and daddy and sister. His soft-boiled brain had just discovered thought. He was sizing up his world, and here's the assessment he made. If he could put his hands anywhere and nobody said anything, then he was alive: if he couldn't, then he was being destroyed—the ground rules were squeezing him out of existence.

Everything he cares about, it comes down to this. He wants to act like other people's boundaries aren't there.

One imagines that his family was awful. No doubt he had crazy parents ready to detonate. They were people who dealt in bad faith, people who punished to make themselves feel big. That's my supposition, since the boy is so fucked up. At any rate, he approached that juncture we all do, the big one back at the start. We ask ourselves: These phenomena around us with the feet and hands, are they also beings or not​? Desperately, he put his money on not.

He set himself up for his lifelong battle. But think of it this way. Yes, he's like a man yanking around electronic goods and trying to rearrange them and make them go while pretending they don't have electric cords that have to be plugged in somewhere. He doesn't realize that the faces and bodies in front of him plug into needs and preferences, into personalities formed separately from his own. He curses and snarls, he catches himself, makes resolutions to be more forbearing toward the appliances' dimwitted reluctance to be maneuvered. He's an idiot. But in his earliest experience, these cords proliferated into a jungle that threatened to swallow him. So he prefers to posit that they don't exist, and to struggle all his life against any sign that they do.

I guess he's selfish. I guess he's arrogant. It's not that the words are too soft; I'm not holding out for “overbearing” and “super-selfish.” But they miss his particular kink, this promise that he made to himself when young. Arrogant, selfish people can go about their nonsense without a thought to the people around them. But the boy spends a lot of time thinking about his students. He convinces himself he appreciates them as nobody else can. He sees them whole, he tells himself, in all their dimensions. He tells himself that until they want nothing to do with him.

In some ways, he does see them better than anyone else does. His senses are keen, his brain works fast. He's alert as a monkey. But he made his decision: No matter what, he would refuse to notice those cords. He can't feel like himself unless they've been ruled out of existence.

Showing him good will just encourages him to keep on as he is. Good will is the impulse that bridges gaps between people. He uses it as cover for his attempts to raid boundaries. This bit of subterfuge, good will as cover for invasion and territory grabbing, works on him as much as anyone else. He's fooled because he likes to make nice names for his lousy motives; if he couldn't, his psychic functioning would conk out.

So go ahead, show him good will. What he wants now is to sit in the corner and play brat and problem case and be an issue for the other teachers to fuss over. This is quite comfortable, he can keep the arrangement going a long time. It runs on good will, and I guess he came to the right place. But I say get rid of him.