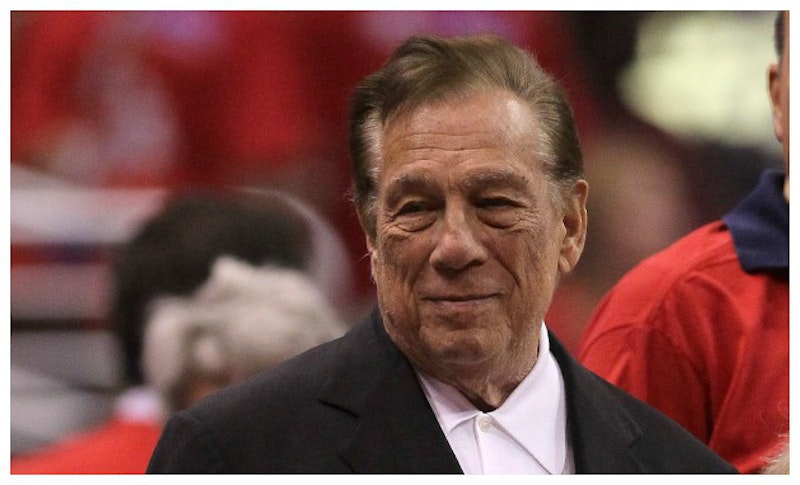 Donald Sterling talks the way he looks. He sounds like a fat-faced man under a dead rat of a toupee or some similar hair construct, his mouth crimped with self-satisfaction. Listening to the tape his girlfriend made, there's this flat-footed, whiny lilt to his voice—an almost lilt, like his voice might develop some lift if he could be bothered, but for now it will just bump along as facts are laid out. Sterling is being very reasonable: “You can sleep with them, you can bring them in, you can do whatever you want. The little I ask you is not to promote it on that [Instagram], and not to bring them to my games.” No wonder she set him up.

Do you hear about affected teenagers anymore? I was a bad one, a very bad case, and I remember that books and movies presented others, a stream that went back to the 1940s or before. Most of them were girls. The daughter in Shadow of a Doubt, flinging herself around as she wails about adult incomprehension. Daughters parading in three ropes of pearls and their mom's gown, billows falling at their knees.

The teen girl in the suburbs, skinny and foolish, tried to be older than she was by living out dreams of adult behavior. That was the convention anyway, the stock figure. “Dah-ling” the girl would say, because she wanted to be an actress, a grande dame of theater. Who might be 40 or more. Back then girls wanted to be adults and they made fools of themselves trying. Anyway, that's what people were told. My guess is that the convention was strongest in the 1940s.

Today's stock figure is different. The idea today is that girls just want to be hot chicks. That category straddles age groups, but its members speak as kids do, in the language invented by non-adults. For a hot chick, the only good thing about adulthood is the greater logistical capability for doing stuff that, biologically, teens are best suited for: screwing around, getting drunk, going too fast. An adult hot chick is an enlarged version of a teen hot chick, with her legal and financial status upgraded, and with her thighs and vocabulary having undergone as little change as possible.

Letterman and Leno, those bright boys of long ago, have aged into stout, weathered-looking bobbins topped by acrylic whorls and tufts of hair. Conan is lean, not stout, but he's weathered too, and his roofing looks like it has angles and a ski jump. Their hero, Johnny Carson, had hair only in the sense that he was certainly not bald, or at least not to look at. Any hairpieces were there to keep his head from being an issue. The hosts that followed him, this littler batch that we have now, carry structures on their heads. They have outlines like Aztec kings. Their silhouettes beg for our attention; we're supposed to remember them, instant squiggles in our head.

I'd watch four minutes of Leno, seven minutes of Letterman. Then wonder why I can't go to bed and stop wasting time. I have watched entire episodes of Conan, but not many. Late-night comedy on the networks does best in clip shows. I liked Conan's 10th anniversary special; I saw it on DVD in a friend's garage and it was only the good stuff, no crap.

Something that makes me happy: In The Washington Post: “When Palin took the stage at the Hy-Vee Conference Center under a banner that read 'Heels On, Gloves Off' on Sunday at an event for Senate candidate Joni Ernst, the ballroom was half-full, with a couple hundred attendees scattered in clumps. Three people held signs and, while Palin was received warmly, only about 50 people stayed after to shake her hand on the rope line as Shania Twain’s 'She’s Not Just a Pretty Face' blared from the speakers.” The headline: “Sarah Palin Soldiers On as a Diminished Figure in the Republican Party.”