Maybe he was getting someplace. 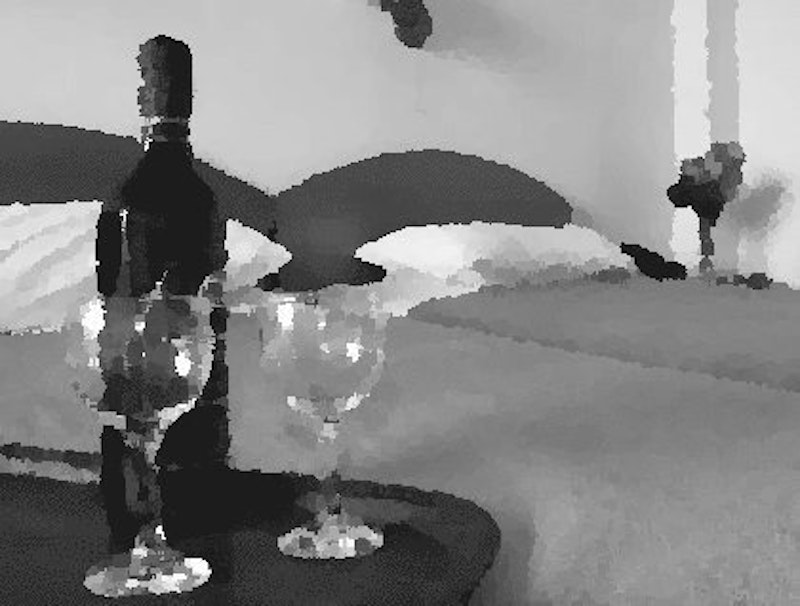 Washington didn't use his voice on the phone. “Yes,” he said, sounding like a young executive. “That's right—the Whalen, room 737.” He had one finger on the ad in the newspaper, which he had circled in red. He felt a little reassured because his eye could land on it without trouble; something at least was under control. Plus he had driven the five miles here in his Thunderbird, now safely parked in the hotel’s lot.

The room had a mini-bar and he had checked to make sure liquor was inside, in case she wanted some. He wore his best suit and in his pocket were half a dozen Trojans. He had bought them two months ago, after reasoning with himself at length and finding a pharmacy several miles from his neighborhood; the man behind the counter hadn’t said anything. Washington kept them in his pocket because he didn’t want to embarrass the girl. Her name was Dover and according to the ad she was very affectionate.

“Well, I’m sure I will be,” Washington said into the phone. “I’ve heard great things. All my friends swear by your operation.” The man on the other end asked who and Washington felt panic. He laughed, richly. “That would be telling,” he said, and was amazed when it turned out to be the right answer, or at least a right answer. The man laughed too and said something about the clientele valuing discretion.

After hanging up, Washington sat in one of the room’s low, moss-green arm chairs; they seemed to be upholstered in felt. He looked at the gleam on the toes of his black shoes, and now and then thought about turning on the television. But the walk seemed too far to make and, secretly, he didn’t much want his eyes to fall on the bed.

He didn’t leave the hotel and go home. He drew on his will and remained in the seat. Today was his birthday and he still had a good deal of progress to make. He wanted to show what he could do.

The man had said six o’clock, but six o’clock passed and nothing. Theoretically he ought to call the agency, but he didn’t want to do that. Washington drew on his will some more. At 6:12 a knock came at the door. He rose to his feet and slapped his palms once against his sides, then walked to the door and swung it wide.

“Welcome, my dear,” Washington said. “You brighten the room.” He was still using Len’s voice.

“Hi. I guess I better come in,” the woman said. She was staring at him, and he dropped his eyes. But she walked into the room, and when he looked at her again she was glancing around as if reassured. The Whalen was a pretty expensive place.

The woman looked at his Guccis and their gleam, and then up and down at his dark, rich suit. Washington’s heart beat like a hammer, but at the same time something like calm seemed to take him up and bolster him. He knew that right now he was helpless to do anything at all, but the fact remained that he had prepared. He had done everything right.

“You’re dressed nice,” the woman said. “I like your suit.” She didn’t look right at him, but she smiled as if she wanted to show she knew how to do it. “That’s some heat out there,” she added. “In the taxi I was broiling.” She waited.

“We have wine if you would care for some,” Washington said, and he found that just the low vibration of his voice inside his throat made him feel better. Washington looked at her hair, which was blonde and a bit sticky from hair spray. He looked at her shoulders—she wore a green dress, straps over the shoulders, and they were tanned with broad, dark freckles. He felt like everything heavy on earth was tipping him toward her; the feeling was bigger than fear. He was erect.

Before pouring the wine he had to fling his hand out from the wrist, to do so twice, because otherwise it wouldn’t stop shaking. But he managed a glass and brought it over to her. She had seated herself in one of the armchairs. She kept her chin lifted, as if she might have to field questions from unexpected corners of the room, and she looked at him only for a moment here and there. As if from high above and a long way off, Washington sensed that he made her nervous. It was a dismal and familiar feeling, like a slow-motion catastrophe was taking place and he could do nothing to stop it. All he wanted now was for the catastrophe to take a while. He wanted it to unfold over enough time for the two of them to do what they were supposed to do. Because finally a woman and he were in a room together. He would not let himself walk out as the man he was now.

“You’re not having any?” the woman said, looking at her glass as if a practical joke were being pulled.

“Ladies first,” Washington said, still as Len, and he hied off to pour himself a glass too. He wanted to say he forgot things sometimes, but he stopped himself and the choice reassured him: he could do something right. Plus he had poured the glass before his hand could remember to shake.

“Len,” Washington said. “Len Bacall.” He assumed shaking hands was out, given the wine glasses.

“Yes!” Washington said. “She is a beautiful woman. But you are beautiful as well.”

“Oh, hey,” Dover said. She added, “Is my makeup all right? I was late getting out from work.”

“I think it’s okay,” Washington said. All the outlines seemed to be in place; he didn’t see any smudges.

“I had to put it on coming over. In the cab. This is my first today.” She didn’t seem so nervous any more; or at least, if she was nervous, she didn’t think anything was fundamentally wrong. Washington’s own fear remained great, but he could live with it the next few minutes, the half hour. It felt like a boulder he could sit on top of. He looked down on the world from it.

She talked a lot now. He looked into Dover’s hazel eyes and counted the freckles sprayed across her nose, and he felt his blood chug inside him. One problem came up, just once. It took him by surprise because it wasn’t fear.

Dover had put her hand on his knee. Washington stood up, nodded to her stiffly, and excused himself. In the bathroom he shut the door tight and wrapped a towel around his hand. A last-minute thought caused him to run the taps, for noise. Then he wadded up the second towel and held it against the wall. He hit it as hard as he could. The whole exercise was a bit awkward. The first towel slipped off his knuckles and he let the second one slide down the wall. But first he managed a couple of punches, and he felt like the job had been done. The red fury that had suddenly started up behind his eyes was now dimmed. He opened the door and walked back to Dover with small, quick steps.

Washington took off his jacket. “Yeah, all right,” Dover said. She pried off her shoes, high heels, and stepped out of her dress. Washington thought she was beautiful. She wore a slip, the straps pressed down a bit in her flesh, and she had a tummy. You could see everything move underneath the slip, and then she pulled it off and over her head. Her arms all of a sudden looked pinker, now that they were attached to more body and not to a dress. Washington looked at the vast rosebuds of her nipples, pointing downwards, and he wanted to faint.

His clothes shrugged themselves off his body. He had never moved with such speed and smoothness, not unless he was playing a part. He was naked and he took her hand. Then they sat down on the bed and she put the rubber on him—he didn’t have to use one of his, so he had bought them for nothing. Less than a minute later he was inside her, and very soon he let out a scream. He felt as if an ocean wave had washed him exactly where he was supposed to be and dropped him there.

“Oh, hey,” Dover said, and didn’t so much push against his shoulder as make a gesture meant to recall pushing. Washington rolled off her. He felt light and agile.

From the bathroom, Dover asked, “Are there any clean towels?” And then: “Oh. I guess these are all right.”

He hadn’t known what to do about the money, so in the end he had decided an envelope would be best and he’d leave it where she could see it—on top of the TV, next to her pocketbook. She was already dressed and had her pocketbook under her arm when she let the envelope fall open and counted the bills. “That comes out right,” she said. She leaned in quickly to kiss him on the cheek, then pulled away. “You’re my first Negro,” she said. “I don’t know. I guess no one’s really that different.”

Washington felt thrilled at what she said. He stood by the door in just his trousers, which he had pulled on and now held up with one fist (no time for a belt, of course). He knew he didn’t look right. But he felt her face close to his face, and without doubt her lips pressed against his cheek, a bit like a tap from a rubber stamp but warm. He felt lucky. Then she said he was like everybody else. He had functioned as a man.

Back on the bed he looked at the ceiling and his mouth spread out in a smile. He sighed, one long sigh after another, like he couldn’t help it, and then he began to sing.

He drifted off sometime before 10, then woke up again after midnight and lay in the unfamiliar room. He felt like his parents were downstairs, or like they were in the old parlor back home and somehow the parlor was downstairs. Washington felt like he had wandered someplace he wasn’t supposed to. Then, at other moments, he looked about the room and reflected that it was just a room.

He got up a little after one in the morning and dressed. Holding his jacket folded on his arm in front of him, he swept to the front desk and dropped his key. He had paid in advance, which was smart.

On the drive home, it was like he turned the wheel once, turned it again, and he was outside his apartment building. Washington didn’t even notice how easy it had been until he drove up. Upstairs he unknotted his tie (he’d put it on again for the front desk) and picked up Anatomy of Marriage and Forever Amber, two stout paperbacks that he had held many times. He tried hefting them thoughtfully, put his tie on the dresser, then tried again, one book in each hand. He could have felt silly but didn’t. He felt like he had come a long way.