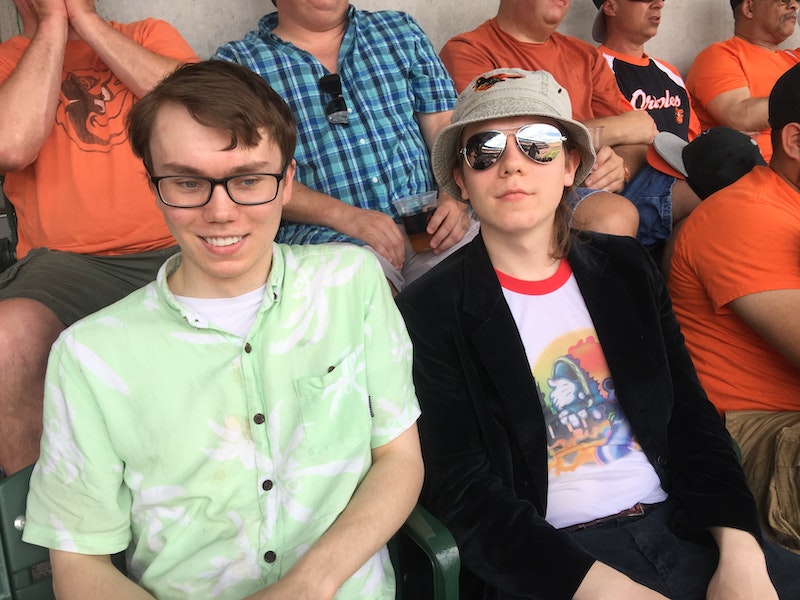 It was during the third inning on Sunday at Baltimore’s Camden Yards, when a well-nourished middle-aged woman returned to her seat in front of me, loaded down with two plates of awful ballpark food. It was a scorcher of an afternoon and just looking at her nachos with an unidentifiable sauce and a lightly-broiled crabcake compromised by a mess of baked beans gave me a 15-second case of the hiccups, with the thought overtaking my mind, Who are these people? That’s unkind, I know, and it may be that she and her heavily-tattooed husband (the tats from another era, looking like they were melting off his beefy skin) are upright citizens who, like everyone else in attendance, were astounded that the oft-maligned Ubaldo Jimenez—just two earned runs, unlike “ace” Dylan Bundy who got creamed by the Indians Monday night—pitched a whale of game, lasting seven innings in an 8-5 Orioles win over the St. Louis Cardinals.

It was Father’s Day, and, as is the custom if the Birds are at home, my wife and two sons were glad to spend the afternoon watching baseball (slowly, on account of demographics, becoming a less popular activity), even if two of us, Booker and me, dislike the O’s because they compete with the Red Sox, while Melissa and Nicky root for the locals. (Our boys, young adults now, pictured above.) Tickets, sold at a premium because of the “holiday,” were scarce, although the crowd was relatively subdued, even if tight-fisted owner Peter Angelos and family drew a rare 34,000 or so fans. In other words, there wasn’t much on the line—not like when we see the Sox play, and eyeball every pitch—which, in a way, makes for a more pleasant experience.

There were a bunch of seat-hoppers in our section—people who plopped themselves down in somebody else’s seats and when the latecomers arrived had to find another perch—and our regular usher in Section 246 was kind of chagrinned at this unusual number of baseball scofflaws. And maybe it was the weather, but I must’ve stood up a dozen times during the course of the game to let other spectators through to get to the john or concession stands.

Oh, one more oddity: both the Birds and Cards were outfitted in powder-blue uniforms (which all MLB teams donned for the weekend) to promote awareness, and raise bucks, of the importance for men to get their prostates checked out. A similar costuming takes place on Mother’s Day weekend, pink all over for breast cancer prevention. Only a spectacularly deranged person could object to these causes, but it’s all getting a bit much, and really difficult to tell which team is playing the field. Why not a pink or blue ribbon on each player’s uniform, and scoreboard directions for how to donate, and leave it at that? Perhaps these “special uniform days” have grown in number to attract more customers, but it’s getting out-of-hand. I hate “throwback” days, when a team dons the garb from a different decade, although Nicky said he wished all the teams were outfitted in those impossibly garish, blotter acid colored polyester pullovers from the '70s, and I just looked at him in astonishment, as if he’d said that Yes and Grand Funk Railroad were Top 10 Bands of All Time.

On the morning of the game, I came across a Splice Today article I wrote several years ago about another Father’s Day outing to Camden Yards, one in which the O’s bested the Red Sox to take three out of four in a weekend series. I stoically shrugged off the loss, concentrating instead on the familial bonhomie, and noted that Jon Lester, who bombed that day, wasn’t likely to excel until he hit 50 and played in a softball league. There are ups and downs during the baseball season, and on this occasion, ruing an Orioles championship (still far preferable to the Yankees), I turned sensible, writing: “Although the Sox lost, well, what’s not to cherish about a day with the family. That alone kept me from a self-induced lobotomy as Boston played listlessly, and Dustin Pedroia was out of the lineup.”

The article’s from 2013, and some might remember that Jon Lester (who’d later wind up with the Cubs) was terrific down the stretch of the season, and Boston, a rag-tag unit that year, improbably won the World Series.

Anyway, after some initial inside-baseball talk with Booker about the 2017 Sox—how to unload the albatross known as Pablo Sandoval, a liability at the plate and in the field, and his fat contract—the four of us blew thought bubbles all around, nattering about Melissa’s tomato plants and the horse she rides twice a week out in Stevenson; the media’s laziness last year in dubbing Tony Tulathimutte’s 2016 Private Citizens “the great Millennial novel”; the music of Jim O’Rourke, Guerilla Toss, William Basinski’s haunting Disintegration Loops, Little Stevie Wonder’s 1962 killer single “Contract on Love,” Ray Price and Narkopop; and the stunning, if inevitable, acquisition of Whole Foods by Amazon’s Jeff Bezos. I’m waiting for Bezos to buy either the New York Mets or Yankees to gain a foothold in that greater metropolitan area, a purchase Mark Zuckerberg apparently has no interest in. I would’ve engaged my wife and sons about Maxine Peake’s star performance in the BBC show Silk, but that would’ve fallen on disinterested ears. It wouldn’t do on Father’s Day.