Not all squirrels are filthy varmints. 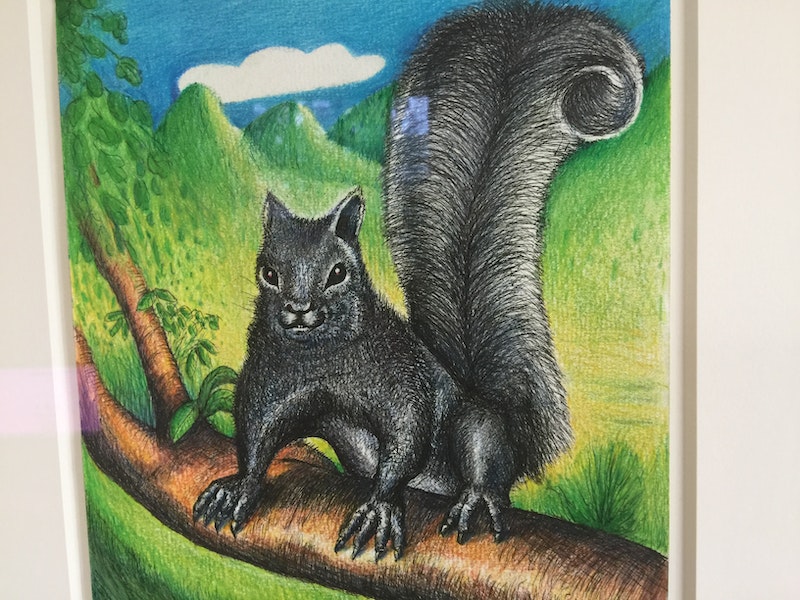 It’s a waiting game now for the Christmas tree in our sunroom. Needles are scattered, hardly any water is required, and the floor beneath is bare, unlike the morning of Dec. 25. I procrastinate in undressing the tree and hauling it outside to the curb; one, it’s a pain in the neck (or, more accurately, the fingers and arms that are scratched by stale branches), and two, it presages the miserable months of January and February. I suppose my son Booker and I will dismantle this lovely decoration—by the way, it’s indulgent, but we toss the lights each year, since they’re fairly cheap and we don’t have to worry about bum bulbs next year—in a week or so. Grudgingly.

Do you like squirrels? I do, even though my wife Melissa loses her mind when a couple of them nibble on the tomato plants during the summer. I had that in the back of my mind earlier this month while trying to figure out a Christmas gift for her. Really, after you’ve known someone so long, it gets more difficult each year to scale Creativity Mountain, which isn’t the biggest deal in the world—it’s not like either of us need much—but still, even after all this time, there’s nothing better when a gift you procured elicits a genuine “Wow!” on Christmas morning. As it happened, I was emailing with my longtime friend Michael Gentile, an artist and former colleague at both Baltimore’s City Paper and New York Press, trying to coordinate a dinner occasion late in January, when my boys and I are heading up to Manhattan, where he still resides. The bulb flicked on in the brain and I asked if he had any recent paintings for sale: our house is filled with Gentiles, but nothing new for several years. Unfortunately, his big work is stored in Maryland, but he did send some shots of recent colored pencil and ink drawings, and we were off to the races.

Time was tight, as the two pieces I bought were unframed, but on the recommendation of college buddy Craig Hankin, also an artist who teaches at Hopkins, I had the work done at the fine JLP Custom Picture Framing Gallery on N. Charles St., complete with instructions form Michael on what sort of glass to use, etc., since that’s another language to me. And above is a detail of a squirrel—immediately dubbed Cranston, after the most notorious tomato-hog from last summer—and I was delighted that my wife was tickled by the gift. (As was I with the all-region DVD player, which allows me to watch great British shows like Happy Valley, The Lakes, and Silent Witness that take forever, if at all, for release on North American Region 1.)

Michael is what H.L. Mencken used to call a “rapscallion,” meaning, in this context, probably the funniest person I’ve ever known, tossing off one-liners with a rather thick Northeast Baltimore accent that on dozens of occasions have caused me—as well as my sons, wife, brothers and other newspapers colleagues—to double up in laughter. Mix that in with a genuine but weird—he’s always had a fascination with nuns, and we’ll leave it at that—Catholicism, a love of both the grubby side of life and au courant pop culture, and a wide streak of generosity and you’ve got a complete package.

Michael will be 60 in January, two years younger than me, and although we’ve both grown far more sedate and fixed in routines, an old dog like him doesn’t lose his spunk, as is demonstrated when we get together a couple of times each year. I could write several thousand words about the wild days of the 1980s and '90s, dicey capers and mischief and seriously (but mostly legal) bad behavior, but some of the best stories in the world about Michael, as our mutual friends Phyllis Orrick and Alan Hirsch could confirm, are better left in the category of oral history, since it’s far too late in the game to stir up hornet’s nests anew. Like that time at the Club Charles, 1983, near closing time, when Michael… nah, skip it, you had to be there or you just wouldn’t believe it.

One day early on in 1983, when our company produced Washington’s City Paper (we were in partnership with the Chicago Reader in that venture) every Wednesday in Baltimore, the D.C. editor, a smart but pompous fellow, was lording over the paste-up tables and, as always, irritating most of the 10 workers in the room. It was difficult enough for Michael, the art director, and his colleagues, to meet a hard deadline for delivery of the flats to a plant in West Virginia—that was the era of line corrections pasted by hand, pre-computers—without grand statements on the state of Capitol Hill politics and egregious name-dropping.

Lunchtime was the worst: the editor always walked to a bodega on 27th St. and bought a liverwurst and onion sandwich for two bucks—a thick slab of the foul meat—and munched on it back in the office while expounding on his excellent selection of stories for that week. He was next to Michael, his gut hanging on the edge of a table, when Michael, nearly faint from the sandwich’s odor, said, “Hey, Mr. Important, could you move your unit away from the boards? And stop spilling mustard on the galleys!” Everyone but the perp doubled over in laughter, including me, and the story passed into our paper’s folklore. G-rated by Michael’s standards—at least compared to when he’d riff about tea-bagging and felching, just to start a conversation—but an example of a guy who was hard to impress.