Appendicitis at 61 is no lark. 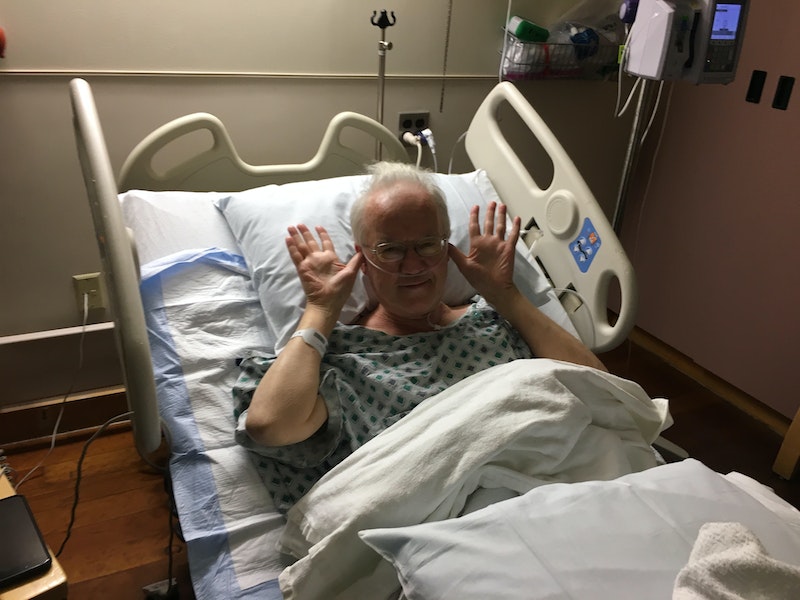 Suddenly awake after a surgeon removed my inflamed appendix at 12:30 Thursday morning at Baltimore’s GBMC, with my sons Nicky and Booker hovering, I felt no sensation in my arms, legs, neck, or funny bone. My mind, although not adequately cogent, flashed back to 1982, when my brother Doug was in a Los Angeles hospital, felled by Guillain-Barré Syndrome, with momentous effort scrawled on a pad, with his teeth, this message to me and our brother Gary: “Paralyzed. Doctors are butchers!” I haven’t the dramatic flair of Doug—whose immune system was compromised during a two-year Peace Corps stint in pre-war Afghanistan in the early 1970s—and unlike my current malady, he was in far, far worse shape, recovering for almost a year, but for a minute I was indeed paralyzed. Perhaps the longest 60 seconds of my life, even as the doctor assured me the operation was a success, and the mere sight of my boys was comforting.

The horrific sensation passed, and as I struggled to speak, motioning with a finger for morphine, it felt like I’d been slugged 55 times in a bad man’s alley by Sonny Liston in his prime. Even at my age, 61, the brain is an ever-mysterious organ, so it’s hard to explain why—as the doctor and his associates spoke directly to me with pro forma reassurances—the song “Shapes of Things” blasted in my head. I harmonized with Rod Stewart, and had I been capable, would’ve played guitar with Jeff Beck. This is life in the recovery room of a hospital. Which, just 12 hours earlier, I hadn’t bargained for!

A brief summary: that Sunday night, while watching the Red Sox upend the Yankees for a Fenway sweep, I was in the midst of eating a bowl of pasta when a wave of middling pain and nausea enveloped my body. I put the dinner aside—a shame, since my wife had made a fresh sauce with tomatoes from our garden—took many deep breaths, choked down about 10 slices of pineapple, and after the game hit the sack. I couldn’t sleep: tossing and turning throughout the early morning hours, I figured something was amiss with the pasta’s chicken. My stomach, aside from rich dairy products and medium portions of red meat, is solid: it’s rarely a concern. In fact, the last time I vomited was over a decade ago, when, upon riding in a cab with Nicky to his school in Manhattan, he barfed all over the back seat, and, perhaps in spontaneous sympathy, I followed suit.

In any case, I went about my routine last Monday morning (9/19), wrote a story, edited features for Tuesday’s Splice Today, read several chapters of Irish novelist Paul Murray’s Skippy Dies in the late afternoon and then watched the Sox defeat the Orioles at Camden Yards. I ate a sandwich, took in an episode of the delightful Endeavour, and called it a night. Still felt like shit the next day, so reluctantly took my wife Melissa’s advice—she’s far more sensible than me in these matters—and visited my physician, who suggested a CT-Scan the following day if no improvement occurred. It didn’t, and so Booker took me to GBMC for the barium milkshake treatment—which completely messed up my day—and we went home. Not 30 minutes later, Dr. Greene called and stunned me with the news of my compromised appendix, which he estimated would require a three-day hospital stay (Stunning, but better than the loose tech talk of colon cancer I overheard while getting the CT scan.) He said it hadn’t burst, and beats me why, but I said, “So can I take care of this tomorrow?” Taken aback, this amiable and skilled doctor was momentarily tongue-tied, and then replied, “No! Go to the emergency room immediately and let me work the phones and try to find an available surgeon.” He must’ve dipped into the favor bank, as I was operated upon later that night—hardly a given—and my appreciation for his effort is considerable.

Booker and Melissa had ferried me to GBMC—in Baltimore County, but just 20 minutes from our city home—and as Tom Petty sang many years ago (before he became a professional rock ‘n’ roll ambassador), the waiting was the hardest part. I don’t mean to single out GBMC, as emergency rooms everywhere are jumbles of action, inaction, bureaucracy, live images of unfortunate souls who’ve been shot or in the last stages of life, barely hanging on in wheelchairs, nurses ignoring the incoming while engaged in gossip and form upon form given to patients to complete. But it was a sideshow of human frailty/incompetence that you just never see in those mind-numbing TV medical shows. I was reminded of the classic 1971 Paddy Chayefsky/George C. Scott film The Hospital, although when I jocularly mentioned this to the five or so attendants working on my admission, the blank stares made me feel both misanthropic and about 88 years old. Not incidentally, there was also the Sox-O’s game on tap, and I was concerned that I’d be unable to keep up my text-exchange with a longtime friend from Tribeca, Rick, another Sox devotee from the early 60s. Booker texted Rick, aping my style admirably, so at least that was accomplished. Priorities!

My word, this really is rambling on, so apologies to those who’ve succumbed to merely reading headlines and blurbs, but it was my appendix and I’ll get cranky and croaky if I want to. I blur out now when attempting to recall the chain of events before the knife hit my belly: I know Booker alerted Nicky—who appeared out of nowhere—and called my brothers Randy and Gary, and then he took a break from the maelstrom (as it happened, he and Nicky were flying to Italy in less than two days, and so this was a bollixing up of plans he didn’t need), and Melissa was my wing gal. I’m a lucky guy.

I was taken to an upstairs floor where an ornery nurse barked at the ground floor employees who apparently hadn’t prepped me properly. She said, “Why does this man still have his clothes on?” Dignity doesn’t exist in hospitals, so when she ordered me to drop trou, including drawers, out in the open, I complied, although she did pull a curtain halfway around my temporary bed. As it turned out, this lady had a wicked sense of humor and we hit it off; then the surgeon, in street clothes, appeared, and he was friendly but on the job, although he grimaced when I apprised him that the Sox’s budding star Andrew Benintendi had hit a three-run dinger to down the O’s. He gave me another raft of forms to check off, mostly indemnification waivers in case I didn’t wake up. I gave him a hairy eyebrow for his cavalier attitude on this front, although he explained he did it every day, and certainly didn’t expect an untoward event once in my guts, but hey, it’s a litigious world and he freely admitted he was covering his ass. I’d be remiss if not mentioning that this fellow, in contrast to so many of his colleagues, had none of that infuriating God complex, just a pro making a living.

Hmm, this is starting to exceed my command, so let’s wrap up quickly. It’s now Monday afternoon, I’m mildly buzzed by Oxycodone (which, speaking of no dignity, plays havoc with one’s bowels), the boys just finished walking up and down the Spanish Steps, I’m exhausted looking at Twitter with all those “journalists” handicapping the Trump/Clinton debate, and my sense of time is in the gutter. Along with all those whiffle balls and Spaldeens that my Huntington neighbor Calmie Weiss used to dispose of back in ’68 when they landed on his lawn. Calmie, an older man in the neighborhood, was actually pretty swell, and I shoveled his driveway during snowstorms and mowed his lawn in the summer, providing bank for trips to the bookstore. And his wife Rose… a doll, can I tell you? Maybe not now, but you’ve been warned.