Progress in YA Fiction 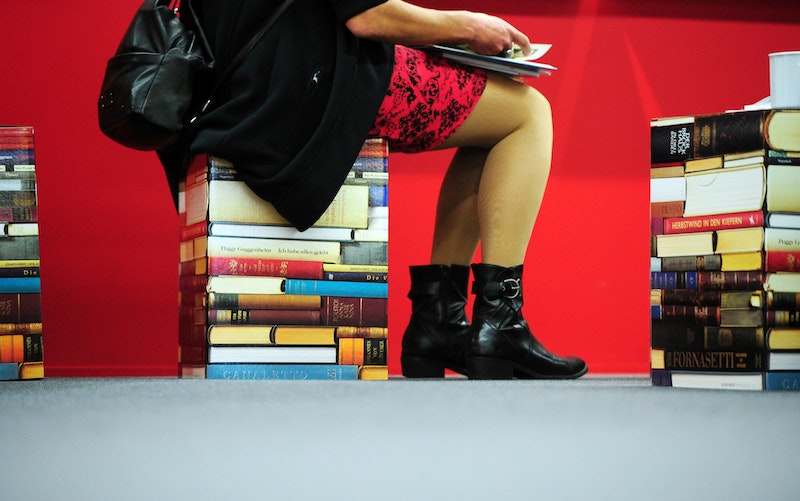 Being super keen on young adult novels as a grownup (side note: when did that happen?) means you get to see how culture is shifting for kids, whose perceptions of societal norms and their own identities are just beginning to form. It’s a big reason I’m so enthusiastic about Steven Universe; apart from being vastly entertaining, it warms my heart to know that children are being exposed to non-heteronormative sexuality. By showing kids that queerness is a perfectly acceptable mode of being, we can avoid the stigmas that cause LGBTQIA youth such pervasive mental and emotional health issues.

This trend has been creeping into YA prose fiction over the last few years especially, and while that itself is wonderful, the response from some sectors of the publishing world has been atrocious. Case in point: VOYA magazine’s review of Kody Keplinger’s new book Run, which stars a bisexual girl as one of its protagonists. The review barely makes any judgement calls (it’s mainly a 200+ word plot summary, which for the record, my editors at Publishers Weekly would never let me get away with); however, after noting that there is one heterosexual sex scene, the reviewer closes their remarks by saying that there are “many references to Bo being bisexual and an abundance of bad language, so it is recommended for mature junior and senior high readers.”

Profanity aside—personally, I recommend kids start cussin’ early—this is appallingly biphobic. To state that the mere mention of bisexuality is itself a “mature” theme is to deny the validity of immature queer youths’ feelings. (Putting it simply, why shouldn’t a twelve-year-old girl who wants to kiss boys and girls get to read a book starring a girl who feels the same way?) Moreover, it insinuates that non-heterosexual desire is inherently “dirty,” while hetero plots dealing with the same feelings require no content warning.

That this review would appear in VOYA, which stands for Voice of Youth Advocates, is especially galling, and I’m far from the only person to think so. While the review appeared in April, it garnered backlash on Wednesday when book blogger Angie Manfredi Tweeted a screencap of the review; on Thursday, author Tristina Wright published her critical email to the VOYA editors, and their response. Regarding Wright’s demand for a public apology and retraction for the “unreasonable content warning,” VOYA’s editor-in-chief RoseMary Honnold wrote that she was “sorry [Wright] took offense” but “the assumption that I or VOYA Magazine might be bi- or any other kind of phobic is just...your assumption. A misguided one.” She went on to casually snipe at the “need to find and destroy your enemies in a public forum” during Bi Visibility Week.

Apparently, it still hasn’t sunk in for some people that you don’t get to tell a bisexual person what biphobia is, just as I as a white person do not get to deny whether something is racist. But even all this made me less angry than Honnold’s response to one particular part of Wright’s message. Wright noted that her six-year-old presently identifies as genderqueer, and wondered how VOYA would react to that; Honnold replied that she “[found] it awkward that you feel it is relevant and necessary to announce and label your five-year-old’s [sic] sexuality to me. That definitely is private and up to your child to discover and announce.”

First, there’s a lot of assuming on Honnold’s part here—while there are certainly parents who feel they have the right to label their children on their behalf, there are also parents who just go along with how their kids say they feel, and that’s totally legitimate. Listening to your child and celebrating their identity isn’t a bad thing—after all, we have enough baby clothes for male-assigned toddlers that shriek “LADIES’ MAN IN TRAINING,” which is just as noxious as forcing a child into a trans identity because you think it’s hip.

But that’s beside the point. What I find inexcusable is that not only does Honnold not understand that being genderqueer has nothing to do with sexuality, but misses the entire point of Wright’s critique and even doubles down, stating that a child’s gender identity is “private” because it is not cisgender. Why is it that when children defy societal norms, we tell them to keep it to themselves? Is Honnold similarly uncomfortable with gender-reveal parties, or does her concern only extend to awkward displays of queerness?

When I was a kid, I had no one to tell me I didn’t have to be a boy. If I’d read something like April Daniels’ forthcoming debut Dreadnought—a superhero story starring a teenage trans girl—I might have realized the truth about myself over a decade ago. But because being trans or gay or anything other than a cishet guy was synonymous with “adult content” back then, that sort of material was denied to me. Instead, I discovered trans identities through overtly sexual channels, and wouldn’t realize I could be trans without being a shameful, disgusting pervert until I was in my mid-20s. I’ll probably be a little bitter about that until I die.

That’s why I’m angry: because I’m so happy for all the gay and bi trans girls who might have the childhood I never got, and because casually queerphobic attitudes among youth advocates threaten all the progress we’ve made. I’m glad that Wright and other members of the YA Twitter community have taken this opportunity to shine a light on Run and many other excellent pieces of queer fiction for young readers, but we can’t declare victory until regressive attitudes toward children’s sexual and gender identities are finally tossed out of the industry for good.