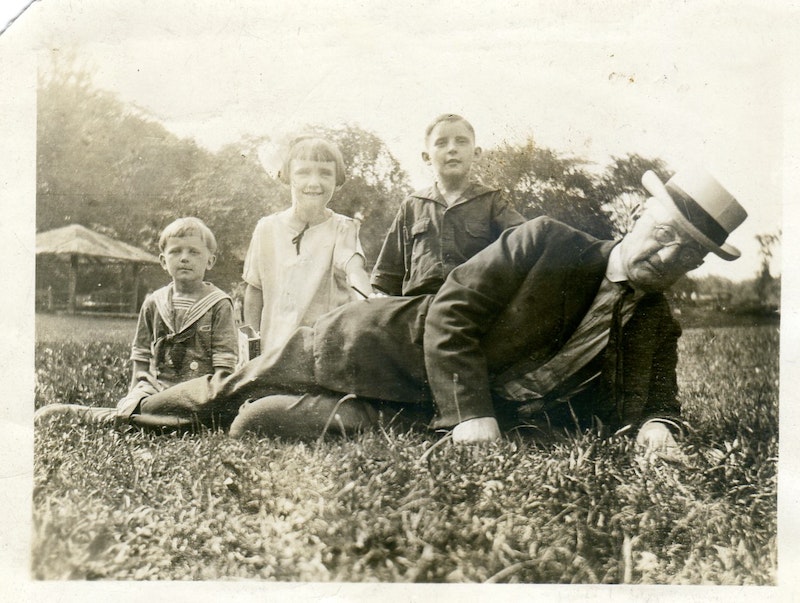 I’m not sure if it’s particularly unusual, but I never knew three of my grandparents, all born in the 19th century, while my entrance wasn’t until 1955. As a youngster, I remember a lot of my friends were left in their grandparents’ care on occasion, and some of the marvelously gabby ones—especially Jews who’d either escaped Europe in the 1930s, or survived the still unspeakable wrath of the Germans—told stories that I could listen to all day. As is often said, nothing beats oral history, even if you have to factor in embellishments and some horn-tooting. Getting family information second-hand, even from your parents, means events have been stepped on a bit, with moving parts, not really dissimilar from a traditional folk song that’s passed down from generation to generation.

In the photo above, my grandfather Peter Duncan (the last name was really Dungan, but a consonant was altered at Riker’s Island when his family emigrated from Ireland) slouches on the right, traditionally attired in a suit (with a Herbert Hoover-round collared shirt) on a summer afternoon in Northport, Long Island. This was taken in 1926—my Uncle Pete’s on the left, my mother in the center, and Uncle Joe rounds out the trio—on a getaway from their South Bronx home, then an Irish enclave. Grandfather Peter, born outside Dublin in 1869—the exact date varies, my mom always said it was a year earlier—was a New York City cop upon reaching adulthood, and, from what I gather, a pretty good one, receiving promotions and citations, and, according to my mother, even had a passing relationship with Teddy Roosevelt. I think that snippet might be conflated, but no one from that older generation is still alive to verify or deny. But I always took Mom’s word as gospel as a pre-teen and thought it was pretty cool, my grandfather hanging with T.R. before any of his kids were born. More than 25 years ago, I talked to Uncle Joe about his youth, his trips to the first Yankee Stadium (built in 1923, when he was eight) not far from their home, and watching Babe Ruth, Lou Gehrig, Waite Hoyt and Tony Lazzeri.

Apparently, “the Roaring Twenties” didn’t define my grandparents (Grandmother Catherine, died less than a year after I was born), and I never got a straight answer from Uncles Joe and Pete (or my mom, for that matter), how they, as an Irish family did or didn’t get around Prohibition. It’s as if the three of them were frozen in time, with a look over the shoulder for authorities who did on occasion make arrests, but there was vague chatter about safe bathtub gin and mugs of beer in the back rooms at corner stores, so I think that seals the deal. I do know, however, that my grandfather, having made friendships with influential New Yorkers in his late-50s, was canny at playing the stock market when it was booming, and cashed out just before the 1929 crash, and so they enjoyed a relatively affluent lifestyle during the Depression. They had the Bronx joint, some money and summer home, which I’d guess qualifies as “affluent,” compared to the millions who—like my father’s family—scraped by, lucky to get work.

One story my mom told, with fond nostalgia, was about her parents’ first impressions of my dad, who came on the scene in the late-1930s. Grandmother Catherine was put off by his quiet demeanor (Silent Cal Coolidge had nothing on my father), but Grandfather Peter hushed his wife, and said, “Yes, Harold doesn’t say much, but when he does you better listen.” Of course, that didn’t prevent either set of parents from skipping my parents’ 1940 wedding—Dad came from a Protestant family, which was anathema to my very Irish Catholic grandmother—which today seems quite strange, although in the context of the era, I suppose, rather standard behavior. (My mother, disillusioned by the Catholic schools she and her brothers attended, changed the spelling of her name Catherine to Kathryn in protest.)

Grandfather Peter died in 1951, at 82, quite a long life for someone of his time, and was preceded by my dad’s mother several years earlier. My oldest two brothers do have memories of the grandparents, although they’ve become fuzzy over time. As for me, the only grandparent I sort of knew was my dad’s father, who lived until 1969 (checking out at 89) in Massachusetts and then New Hampshire, and he was ornery old coot. My family made the long trip from Long Island to New Hampshire once a year and it wasn’t much fun, at least for me. At first, there was a small apartment, the most vivid memory of which I had was the dozens of alarm clocks and other junk (before the Depression, he was a jeweler) and then a very depressing nursing home or assisted living complex, I can’t remember which one. Visits were an obligation—although the sweetener was a fried Ipswich clam dinner before we returned to the motel—and I don’t think he ever knew my name. At the least, he never said it, and just regarded his son’s kids as window dressing. Harsh, I realize, but them’s the facts. This much I’ll say, Grandfather Louis had a hell of a middle name: Stetson.