The “stress” of moving is exaggerated. 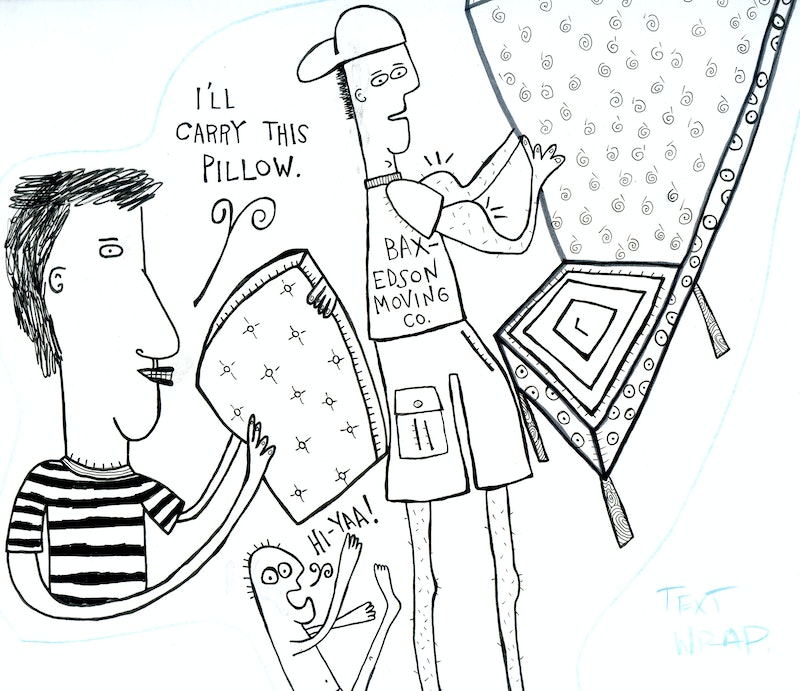 The other day I sent birthday greetings to my niece Jenny—no need to mention her age, but let’s just say I was 13 when she was born—who’s one of the greatest gals I know, and she responded, as requested, with an update on her family of four. Jenny, Rick, Rebecca and Jaden live in Washington State, and are in the midst of a move across town, to a house with easy access to the water, and the kids are looking forward to kayaking, paddle-boats and whatever other aquatic activities they dream up. But here’s the catch: their current house is sold, with the new owners eager to get in, while the place they bought is still in the slow throes of renovation, mainly a lawn job that’s behind schedule. So it’s a juggling act: placating the incoming family while applying the old rolling pin to the construction crew across town. A not uncommon pickle, but they’ve just about reached the finishing line.

It’s said, on TV talks shows and in self-help books, that moving is one of the most traumatic events of a person’s life, right behind the death of a loved one, a busted marriage, bankruptcy and any number of horrific personal injuries. As one who’s moved countless times, I never bought this line of thinking. As a young adult in Baltimore, I accumulated more residences than the number of games the Atlanta Braves will win this season, but those were a breeze: you asked a friend with access to a car to help load some boxes and clothes, drank a sixer and the chore was completed in a couple of hours. And fair is fair: you were on the hook to reciprocate. So those kind of jaunts, common to a lot of men and women in their 20s, don’t really merit a notation in the shrink’s notebook.

It’s a bit later in life, after you’ve been in same apartment/house for a number of years and have accumulated loads of stuff, that moving starts to sap your energy. There are the stages of varying aggravation: buying/selling an abode; deciding what possessions make the cut and what gets tossed in garbage or given away; and, finally moving day. (Once you’re settled in, after the essentials are set up, it’s a gradual period of transition. And often the last 20 percent is left to rot, as the number of still-unopened boxes in our Baltimore basement 13 years after trading a Manhattan condo for a house here often remind me.)

Late in the 1990s, our family found ourselves in the same bind as my niece Jenny. Looking for a loft with outdoor space, we sold our Tribeca co-op on Hudson St. (in a matter of weeks; it was a sizzling real estate market) and left ourselves with about six months of wiggle room for our departure from the Powell Building to a newly-renovated complex of condos just five blocks down the street. This was, generously, quite naïve. Six months dragged into the next calendar year, and the young couple who purchased the co-op, who’d been sports, was getting antsy, and who could blame them?

Meanwhile, my wife Melissa (whose illustration above for one of my New York Press MUGGER columns is a wisecracking look at the pre-moving crew, when we were giving away excess furniture to friends—no-nonsense Moishe’s handled the bulk of the job) was at work full time with a designer for the new digs, while we sweated out the ongoing construction. In fairness, this was Melissa’s project, and the final result of her collaboration with Michael, the fussy designer, was masterful (and actually featured in one of those “shelter” magazines that were popular then, and probably out of business now), so the only “sweat” that dripped down my brow was looking at the price tag for a chair, rug or vase Michael proposed, a quarter of which I told him, “Get the fuck out of town!” and he smiled, figuring it was a worthwhile gamble. (The coziness—and trading of loot—of decorators and suppliers is a murky world, but then again, what business in New York City isn’t?)

Anyway, it all got sorted out—although we did have to spring for a hotel suite for a week at the end, when the overtaxed couple insisted they take occupancy of the old place, one more expense, especially considering that our kids cleaned out the mini-bar each day—and the move was over. A pain in the ass? You bet. But not really traumatic.