It's So Hard to Be at Peace 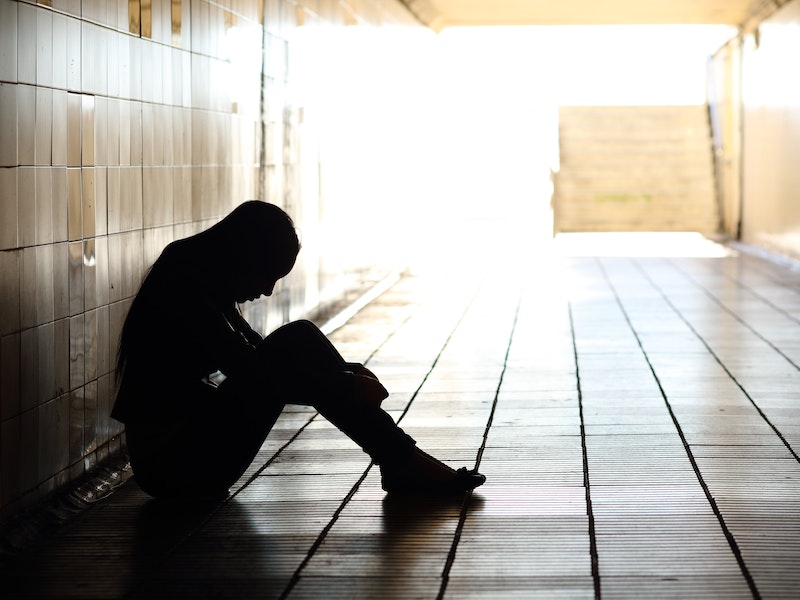 She was so close, and so sad, that the distance nearly broke my heart. Standing in the glum yellow fluorescence of Bellevue Hospital's mental ward, we were less than five paces apart. Yet that red strip of tape—the brightest thing in a hall full of dull blues and browns—made us into foreigners, hesitant or unable even to speak.

I’d left my apartment in Brooklyn far later than I'd promised, and by the time I made it to her ward, I had only minutes to spend with the girl who’d so quickly and efficiently carved out a slice of my heart all to herself. As I surrendered my bag and coat to the orderlies, I tried to take in every detail: her beauty, undiminished by the powder-blue hospital jumpsuit, wild curls surrounding her sharp face, every bit of her waiting with barely-restrained anxiety for our brief reunion.

Lilith (not her real name, but hers still in spirit) and I met at a party full of trans girls like us months ago and swung into the sort of friendship that’s easiest to maintain: one that takes place entirely on Facebook. A few comment threads here, a like-fest there, and we got the impression of knowing one another without much work—but also ended up not truly knowing who the other person was, deep down. Yet.

The first time I visited her in the hospital was also the first time I’d seen her since our introduction, but a fly on the wall would assume I was her dearest friend. She latched onto me like a drowning child, terrified of letting go; the 10 minutes we spent together then seemed twice as long. (I’m not a punctual person.) Small wonder, given the lonely isolation of being on suicide watch. Lilith, convinced she had no other option, had swallowed a ludicrous number of pills and then passed out. She didn’t like pain—the kind that came from hurting herself, or the kind that came from existing as a trans girl with acute gender dysphoria.

Lilith isn’t alone, of course. Trans Lifeline, the largest transgender suicide hotline in the nation, reported last month that since “bathroom bill” frenzy began sweeping the United States, their call volume has almost doubled. Just as Washington University researchers proved the correlation between familial and societal support and a reduction in transgender depression and anxiety rates, the reverse is also true: the more structural cis-sexism acts against us, the more likely we are to take a shortcut out.

Some weeks later, Lilith and I started hooking up, because that’s what generally happens when trans girls develop low-key emotional intimacy while also admiring each other’s aesthetic. During one of our phone conversations, she told me bleakly that she was tired of the negativity around suicide. “When someone dies of cancer, they aren’t stigmatized. Why should dying of depression be different?” I had no idea how to respond. I still don’t. I only know that for every self-inflicted death in our community, I break a little.

I wrote a poem about her struggles with depression and dysphoria soon after that, my first in years. It disturbed me a little, but that felt right. So when Lilith called to tell me she was back in the hospital, my heart turned icy. Thankfully, she hadn’t made another attempt, but her therapist didn’t want to take any chances. That’s how I found myself in a different mental ward, going through the same procedure, with less time—but more emotion.

We entered the dining area and she wrapped her arms around my neck. The embrace was the same; the kiss was new. I felt her fear subside, and my own recede as well. We eventually sat down at one of the cheap plastic tables to talk. I passed her an apple and pawned her some lip gloss, to keep the dysphoria at bay. She held it and my hand together, as we sat on our island in the middle of her sea.